For veteran journalist, neighborhood trail leads to a new beat 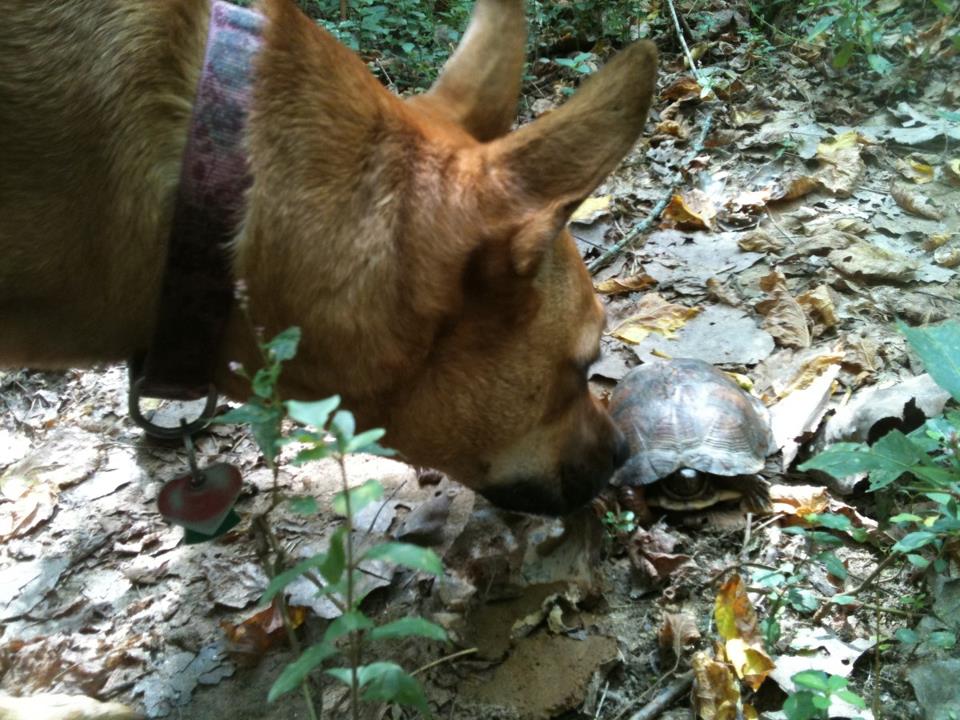 Note from Michelle: This week’s column is by guest writer Ben Smith, who happens to be my husband. Many of you know him from his days as an AJC political reporter. 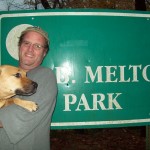 Ben Smith and his dog Cleo at the Ira B. Melton Park trail to strange adventures in north Decatur. (Photo: Simrill Smith)

In my old life, hitting the trail meant following the money, traveling with a campaign or tracking down a criminal.

Today it simply means taking my dog for walks in the woods and keeping my eyes open.

Yet in the three years since I left the Atlanta Journal-Constitution and sought to reinvent myself in the digital age, I have discovered that my skills as a reporter easily translate to a “beat” that is much smaller, more isolated and surprisingly weird.

It is roughly 150 acres of urban forestland in the adjacent Mason Mill and Melton Parks in DeKalb County. It is a place where nothing out of the ordinary much happens – unless you look close enough. 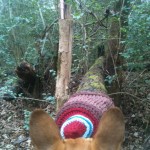 As seen from a dog’s view, a “knit bomber” created this covering for this fallen log.

That includes the sight of Nazis chasing men in striped pajamas on the CSX rail line (actors in a student film), a fire extinguisher shoved into a tight split in the trunk of a tree; and, an unopened gallon of vodka on a storm grate.

The bottle had faint signatures etched in magic marker all over it.

These peculiar, creepy, funny and unexplainable sightings have helped me, in my long valley of underemployment, to remember that anything is possible. Making other people smile and laugh gives me a break from the isolation and frustration of being out of work.

My voluntary “reports” don’t get circulated in major publications or across the Internet. They are short Facebook accounts of adventures in my “magic woods,” as one reader refers to them.

My first reported incident occurred in the summer of 2011. My shepherd mix Cleo started barking and running toward a patch of blue less than a hundred yards ahead of us, just off the trail. 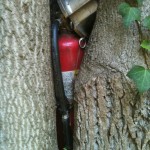 The fire extinguisher in the crook of a tree.

I ran after her, only to discover a naked man and a nude woman on a tarp, red-faced and anxiously scrambling to cover their private parts.

In all my years of journalism, I never felt so tongue-tied. “Hi, how are y’all doing?” was all I could manage.

“Fine,” the man said, as he sat sideways clutching his bent knees together. “How are you?”

Clearly not as well as you both are, I wanted to say. 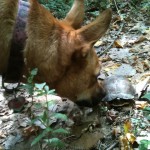 My “nudists in the woods” report prompted strong responses from my Facebook friends. What precisely was the couple doing there? And their pets would have done more than bark. “My dog would have sniffed their butts,” one wrote.

A shocked reader suggested that my report raised questions about the safety of the park and asked why I didn’t report the couple to the police. Not only was I too stunned, but I didn’t want to get busted.

An untethered dog is a $500 fine. Being naked in the woods is only $360, according to DeKalb County Recorder’s Court.

The nudist encounter persuaded me to keep looking out for other news of the weird from my woods.

A few weeks later, I passed a woman with two small children, a boy and a girl, both apparently between the age of preschool and first grade.

The boy checked my dog’s underside.

“Hello (expletive),” he said to her, using the precise scientific term for a female dog. 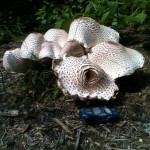 Mushrooms in the woods. And no, I haven’t been eating them.

Some incredulous Facebook readers couldn’t fathom a child that young would use such language, even though the word he uttered was in an  abridged standard dictionary as “a female dog, wolf, fox or otter.”

All I know is that the etiquette of the woods is whatever you can get away with.

Then came the attacks on my veracity. One reader suggested my reports were “magic.” Another referred to them as products of an “alternate universe.” I doubled down on corroborating my stories with photographs, since there was really no way for me to second source these accounts. 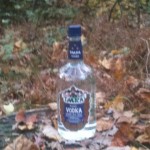 I took a picture of the vodka bottle, which I confiscated for the sake of  under-age troglodytes that use this trail and leave behind their fire rings and trash. And no, I wasn’t becoming, as one reader accused, DeKalb County’s version of Ernest T. Bass, the rowdy hillbilly who was always causing trouble for Andy and Barney in “The Andy Griffith Show.” Call it hyperlocal news service, with some trash removal on the side.

A journalist remains undaunted by such skepticism and criticism. Next I found a cardboard skeleton with a detached head and a decoder ring attached to its rib cage. A few days later, a scroll of paper under a fallen tree trunk contained some of the same strange cuneiform. This time the Ben Witch Project came back with photo proof. 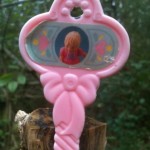 Creepy kids toy. Like most things in the woods, no one knows who owned this or where it came from.

Other times I wasn’t fast enough with my camera. Trust me about the hawk flying over my head with a bunny in its talons. I couldn’t get to my camera, because I couldn’t take my eyes off this scene from my wild kingdom. 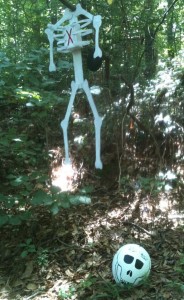 Photographs were definitely too risky at times. I struck up a conversation with a cigar-chomping man I’d seen from time to time during my walks. When I revealed I was unemployed, he started talking about the lazy non-white workers he supervised. He used the N-word to describe them and President Obama.

I told him he shouldn’t talk that way.

“Listen, put an N-bomb in a suit, you’ve still got an N-bomb,” he snarled.

“You’ve got some sinister crap in your heart,” I replied, immediately wondering where that phrase came from. “Get it out before it destroys you.”

He lobbed curse words at me. I volleyed them back as we wandered separate ways. I felt good that I had stood up to the old man, but somewhat stunned by encountering a hardcore racist in the liberal land of greater Decatur.

If I see the old bigot again, I’ll be posting that too. 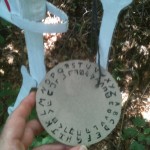 A decoder of some sort near the skeleton.

Today, I remain undeterred in my quest for evidence of the miraculousness of the commonplace as well as fodder for funky tales to entertain my friends. Whenever I walk into the woods I go with anticipation about the next surprise.

Though my world and the importance of my profession has shrunk in this bad economy, I still see the power of reporting, even if it’s just on a trail in my neighborhood. There are stories to be found about the good, bad and ugly everywhere.

Unlike the outside world, in the woods there is no need for an explanation or investigation. Simply stumbling upon these mysteries and recording them is enough for me as well as those who seem to enjoy reading about them.

For a 53-year-old guy from the print era trying to find meaningful work in the digital age, my belief in surprises helps me go on.

Previous Article
Why Do Pro Bono Work in a Down Economy?
Next Article
Atlanta’s civil rights legacy in spotlight: Airport, Voting Rights Act