After a month in town as the new CEO of the Atlanta Housing Authority, Eugene Jones Jr. is stirring new life into an organization fraught with leadership turmoil, lawsuits and limited building activity of new affordable housing units for nearly a decade.

“I’ve looked at the portfolio, and what we have to do here is rachet up,” said Jones in a recent interview. “We are going to put everything on the table.” The AHA provides affordable housing to about 50,000 people in the city of Atlanta.

One example of Jones’ new approach is the Civic Center property, which the authority has owned since 2017.

Jones said the authority soon will issue a new request for proposals for the development of the Civic Center site, and he would like to explore the best uses for the property. 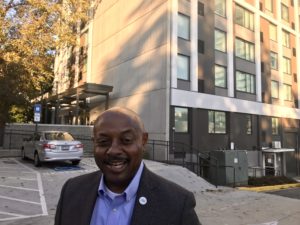 “We are considering all options,” said Jones, who appeared to have little patience for the status quo.

Jones, a 35-year professional in the public housing industry, most recently served a four-and-a-half-year stint as CEO of the Chicago Housing Authority. Over his career, he has worked in Indianapolis, Toronto, Detroit and Kansas City. He began his career in public housing working for the U.S. Department of Housing and Urban Development.

Atlanta was an attractive city to move to because “this is really where it all started,” Jones said. The first public housing projects in the nation were built in Atlanta: Techwood Homes opened in 1936.

Two key visionaries of that reinvention were Renee Glover, who headed AHA for 19 years – from 1994 to 2013; and Egbert Perry, CEO of development company the Integral Group.

Jones praised Glover as being one of a handful of public housing leaders in the country who were known for being innovative and transforming the industry.

“I have a professional relationship with Renee Glover, and that’s not going to change,” Jones said. “She’s good. I don’t want anything to disrupt what we are doing right now.”

When Jones came to Atlanta, he inherited an authority that has been in litigation against Glover and Perry for years.

In the interview, Jones said he is looking to have an agreement to settle the lawsuits with both Glover and Perry in the near future.

“We are close,” Jones said. “It’s time to turn the page. We have got to move forward and build units and provide affordable housing.”

Jones said the authority has 200 acres of vacant land, and he would like the authority to become a more significant player in meeting Atlanta Mayor Keisha Lance Bottoms’ goal of creating 20,000 affordable housing units in the city by the end of 2024.

“We want to be aggressive,” said Jones, who added that the authority also is considering becoming its own developer where it would hire architects and general contractors. He is interested in any pilot programs, including modular homes, to build “better housing for less cost.”

But he also looking to joint venturing with private developers to build more affordable housing.

“Because of all the land that’s out there, there’s an opportunity to build more affordable housing,” Jones said. “We are at the table. We can’t do it quick enough.”

By becoming a more active participant in developing affordable housing in Atlanta, Jones believes the city will be able to meet the 20,000-unit goal “sooner than what has been predicted.”

Karen Young, interim director of communications for the agency, said the agency has added 3,302 affordable new units in the last three years alone, primarily through contracts with private apartment owners and developers. If the cost of building new affordable housing is estimated at $125,000 per unit, it would have cost $495 million to house those 3,300 families, according to Young. 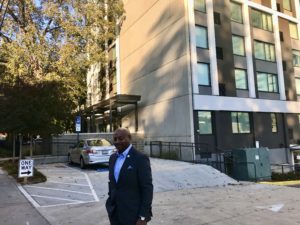 Jones said the agency is looking to become more engaged in developing its land. He said he expects to close on three pending developments by the end of the year, including Herndon Square on Northside Drive.

“We are trying to right the ship,” said Jones, who quickly added that the authority is not sinking. “This staff has worked hard to get those units out there. It’s not easy. There is a good staff here.”

In his first month in Atlanta, Jones has visited virtually all of the agency’s properties, and he’s been especially pleased with the quality of senior living facilities.

Jones signed a three-year contract with Atlanta Housing. When asked about why he resigned from the Chicago agency, Jones only answered in generalities. Chicago’s current mayor, Lori Lightfoot, assumed office in May. Jones said it’s not unusual that when “a new mayor comes in and you’re gone.”

In Atlanta, Jones, 64, said he’ll be dedicated to the job 24-7 because is not married and his three adult children live elsewhere. And then with surprising candor, he talked about his three children – his oldest son, Oscar, 36, lives in Chicago and he has a 30-year-old daughter living in Oakland, Calif.

“My youngest son is 21, and he is in jail, charged for murder in Indianapolis,” Jones of his son Eugene. “I’m public about it. He has a March trial date.”

Meanwhile, Jones said he lives intown. He marvels at the development that has occurred in Midtown and Buckhead.

“This is a beautiful city,” said Jones, who added he would like to see more affordable housing in those communities as well as throughout the city.

“There’s so much going on right now,” Jones said. “This is fun. This is where I want to be.”