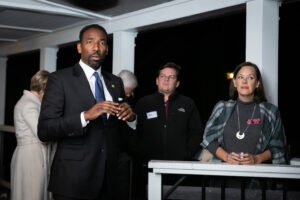 Dickens’ message, according to a spokesperson, boiled down to a statement that he “is committed to keeping Atlanta one city with one future and will work closely with those with the same goal.”

State Rep. Betsy Holland (D-Atlanta) and City Councilmember Matt Westmoreland were among those in attendance.

Holland, a Buckhead resident, later said she was “privileged to have the opportunity to speak about some of the concerns I have about the proposed deannexation. It was a warm and energizing event. The gathering really represented the Buckhead that I know and love — people of diverse ages, ethnicities, professions and backgrounds from all corners of the neighborhood who all love calling Atlanta home. I’m really excited to keep the conversation going and engage more people in the discussion.”

“I’m grateful to the Buckhead parents and community members who organized this kickoff and are building a genuine grassroots effort,” Westmoreland said the following day. “Their actions are going to protect our neighborhood schools and preserve Buckhead’s dynamic economy — both of which are at stake with this existential threat. At the same time, I will be working hard with our new mayor and new councilmembers to continue aggressively addressing the challenges we face.”

Other officials in attendance were Atlanta Board of Education chair Jason Esteves, who is running for the Buckhead-area District 6 state Senate seat, and board member Cynthia Briscoe Brown. Another attendee was Jim Durrett, who heads both the Buckhead Coalition — which funded a study critical of cityhood — and the Buckhead Community Improvement District. 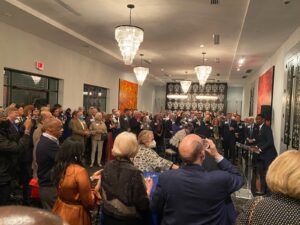 “We appreciate the enthusiastic support of Mayor-elect Dickens in our efforts to reach out to our friends and communities,” said Mike Handelman, the group’s executive director, in a press release. “Secession proposals such as ‘Buckhead City’ pose incalculable costs and harm to our schools, safety and prosperity.”

For Dickens, the event was part of a week of first official visits to Buckhead. They included a live appearance at a big-ticket fundraiser for the CUA Dec. 8, and a virtual meeting Dec. 10 with neighborhood association leaders in Buckhead’s City Council District 8.

One group not on the meeting list so far is the pro-cityhood Buckhead City Committee (BCC), though Dickens is open to visiting with them, according to a spokesperson. However, BCC chairman and CEO Bill White is already blasting Dickens’ policies and description of the cityhood supporters as “separatists,” and claims the mayor-elect does not intend to meet with them. In an Instagram post about that Dec. 10 neighborhood meeting, White called Dickens “100 percent dishonest in his words and actions.”