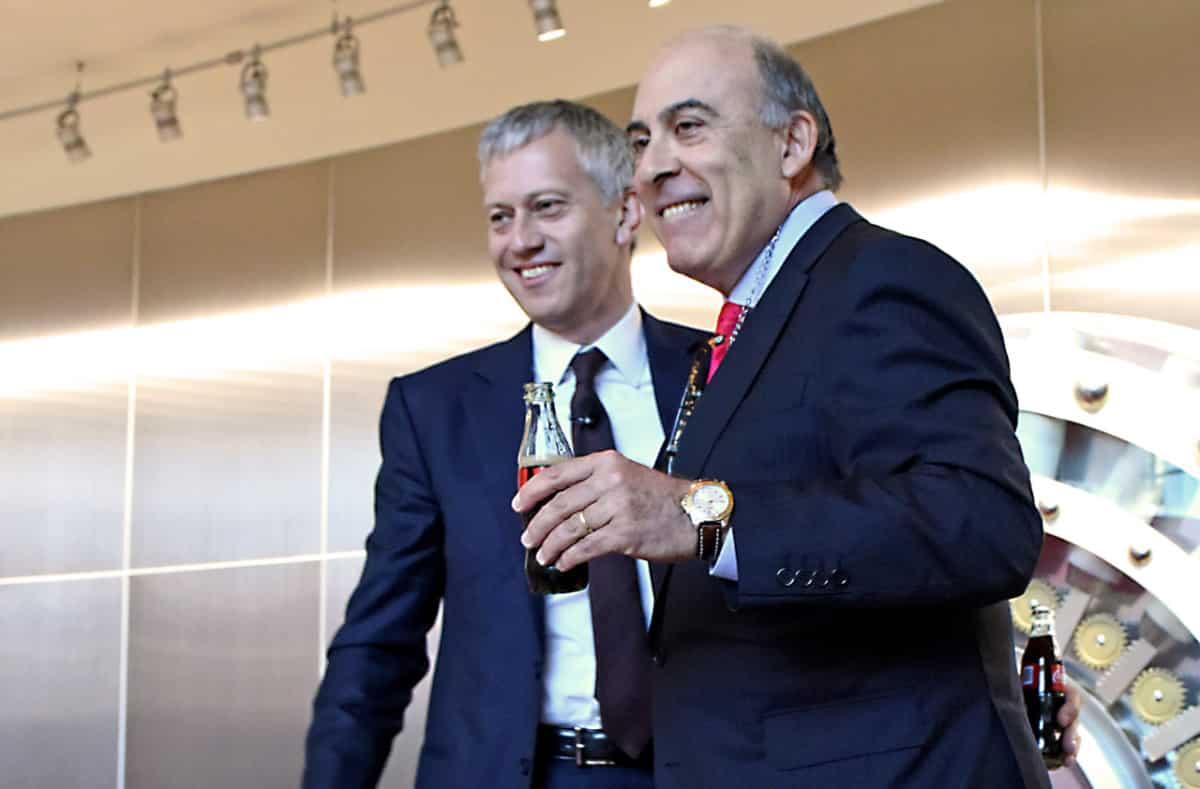 James Quincey and Muhtar Kent at the Coca-Cola 2017 annual meeting at the World of Coke (Special: Coca-Cola Co.)

As James Quincey becomes CEO of The Coca-Cola Co. on May 1, he faces a multitude of challenges — an embattled signature brand, stagnant growth of its market cap, consumers who want healthier beverages, and even the possibility that the company could be acquired by another global enterprise such as Belgium’s Anheuser Busch InBev NV.

“He has a pretty big hill to climb,” said one person who is close to the company. “What does the company need to do? It needs to return to growth and restore it[self] to what it once was — a growth company.”

In conversations with several people who are close to the company, the views were relatively consistent. Quincey is entering his tenure as CEO with his eyes open and a clear agenda for where the company needs to go.

On April 25, a week before Quincey was to succeed Muhtar Kent as CEO, the company announced plans to cut approximately 1,200 jobs as it puts in place a “leaner corporate organization.” Most of them will be at the corporate headquarters in Atlanta. 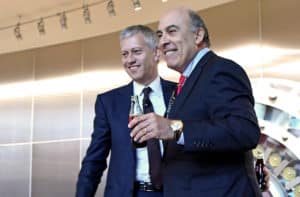 James Quincey and Muhtar Kent at the Coca-Cola 2017 annual meeting at the World of Coke (Special: Coca-Cola Co.)

“These changes are critical for us to create an environment where we can accelerate growth and become the consumer-centric, total beverage company we need to be in a fast-changing world,” Quincey said in a statement.

The company reduced its employee base by more than 20,000 last year. Coca-Cola’s total employment declined from 123,200 at the end of 2015 to 100,300 at the end of 2016. It expects to achieve an additional $800 million a year in productivity savings over the next few years. The announcement came as Coca-Cola reported that its net revenues for the first quarter declined 11 percent.

The company’s annual revenues, which peaked at $48 billion in 2012, fell to under $42 billion last year.

Other people close to Coca-Cola, several who spoke on background, did not seem overly anxious the company would be taken over by an InBev or another entity.

“I don’t think so,” said Jimmy Williams, retired CEO of SunTrust Banks and a longtime director on Coca-Cola’s board until he retired in 2013. “The market cap is mighty high. It’s always on your mind, but I don’t see that happening anytime soon. The biggest thing Coke can do is keep the market cap high. I’m not worried.”

If Coca-Cola were to be acquired it would be a devastating blow to Atlanta. Coke was invented in Atlanta 131 years ago, and the company and city are as interconnected has any two entities can be – with the name of Coca-Cola magnate Robert W. Woodruff ever-present.

Also, many of Atlanta’s major foundations and wealthy individuals rely on the value of Coca-Cola stock for their largesse. 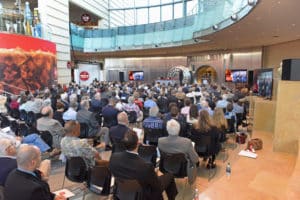 When asked about possibly being acquired by an out-of-town entity, Coca-Cola spokesman Ben Deutsch said the company does not comment on speculation.

“But what I will say is that the work we are doing at Coke today to accelerate growth and transform our system is what we think will create the most value over the long term for our shareowners, our associates and our partners,” Deutsch added. “We are focused on executing our plan in the market — and will continue to be.”

According to one company observer, Coca-Cola has been facing a “perfect storm” of challenges, which has impacted its growth.

The emerging markets where Coca-Cola has historically enjoyed much of its growth have slowed down because of economic slides limiting people’s disposable income.

The second issue is currency. The United States is experiencing the longest period of a strong dollar — about eight years — since World War II. Since most of Coca-Cola’s growth comes from overseas, it’s been a “double whammy” for the company’s revenues.

Added to that is the company’s product mix. Carbonated sugar drinks are increasingly being viewed by consumers as being unhealthy, and a recent study has pointed to possible health issues with the company’s diet carbonated drinks. “Increasingly people are getting it — they need to consume less sugar,” an observer said. “The only way you get there is with the portfolio of products.”

Williams said: “They are conscious of the sugar issue. It’s something they’re working on.”

Another observer said Quincey understands the need to invest in a broad portfolio of products beyond sparkling beverages. “Muhtar always thought that red Coke was the heart of everything, and he thought red Coke should and could grow,” he said. “James has a much more open view with sugar and ingredients like aspartame that are under attack.”

The company is now focusing on low- and no-calorie products, and it “has to find a natural, nonnutritive sweetener.” That product mix is expected to focus on coffee, teas, juice and water drinks — or any beverage that is non-alcoholic. Coca-Cola did try going into the wine business decades ago, but it backed-out rather quickly and decided to focus on non-alcoholic beverages.

The company also needs to focus on revenue growth rather than just volume growth and market share.

“In the last few years, Muhtar embraced revenue on transactions rather than volume,” one person said. “Having the right product mix that is driving revenues is what it’s all about.”

Coca-Cola does have a built-in advantage. It currently has more than 500 brands worldwide in 207 countries with 21 brands in the “billion dollar” category.

The company does seem to be on a pace of doing just that.

At its annual meeting on April 26 at the World of Coca-Cola, Kent said its first 100 years, the company was focused primarily on one brand.

“We have a vision of where to go next and how to build on the foundation of Muhtar’s tenure and more than 130 years of this great enterprise,” Quincey said at the annual meeting. “We have decades of growth ahead of us. We can legitimately aspire — with one portfolio — to not only satisfy, engage and deliver great taste for a whole day’s worth of drinks but do so within a healthy, balanced diet. This is a path that’s possible to a larger scale for this company and more profitability.”

As to a possible takeover of Coca-Cola, observers said it would be a difficult challenge.

“There are very few companies in the world that would be able to absorb Coca-Cola,” one said. “One of the biggest challenges an acquirer would face is what to do with the bottling system. Coke generally doesn’t own it. About 85 percent to 90 percent of Coke’s global volume is no longer in the hands of the company.”

So with Coca-Cola’s current market capitalization of more than $185 billion, it probably would cost up to $250 billion or more to acquire the company, and the buyer would still not get the distribution system. Companies like AB-InBev, Unilever, Nestle and Procter & Gamble are used to having those assets included.

And the bottlers, which currently have as good a relationship as ever with the company, could have a say in preventing a takeover.

A scenario could be that if there was an imminent threat of a takeover, the bottlers themselves could organize and could create a poison pill that would make it very difficult to acquire the company.

It doesn’t hurt that the company’s largest individual shareholder — Warren Buffett — would do what he could to keep it an independent company. But Buffett doesn’t have the capacity to buy Coca-Cola. “I don’t see anybody out there right now who could or would want to acquire it,” the observer said.

The big issue is market cap. “Coke’s market cap is not dramatically different today than it was 20 years ago,” an observer said. “That’s a pretty sobering fact. Driving growth and driving increases in market capitalization for investors has to be right at the top of James’ list.”

Kent, who will remain as chairman of the company, pledged his full support to Quincey at the annual meeting. “This journey is not finished,” Kent said. “It will continue with James’ leadership. The best days are ahead of us.”

Coca-Cola’s sales are losing their fizz

(Annual revenues of The Coca-Cola Co. in millions of dollars, by year)