"Ominira Ni Irisi" ("Freedom is Perspective" in Yoruba) by Empress Iyahdae Rose is on display as part of the "For My People: A Photographical Interpretation" exhibit at the Fulton County Central Library. (Image provided by Sistagraphy.)

The “For My People” exhibit can be experienced at the Fulton County Central Library through Nov. 19.

At the beginning of the month, photography nonprofit Sistagraphy opened its fall exhibit, “For My People: A Photographical Interpretation.”

As a part of the Atlanta Celebrates Photograph Month, members of the all-women organization selected images from their work inspired by the 1942 poem “For My People” by  Margret Walker. A triumphant poem about hope, despair and the resilience of Black people in America, Walker’s piece motivated the members to give their photographic interpretation. Thirteen artists were selected to participate in the show.

“We read the poem, and it was almost like she wrote for today,” said Furery Terriy Reid, executive director of Sistagraphy. “So many aspects of it as far as people having race issues — with being who you are as a people — and the different things people go through with the issues they have to deal with today.” 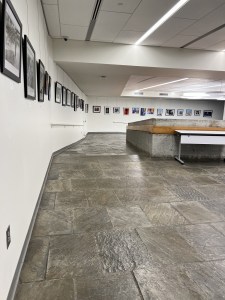 “For My People: A Photographical Interpretation,” displayed at the Fulton County Central Library. (Photo by Allison Joyner.)

Sistagraphy was formed in 1993 by artist Shelia Turner and eight Black women that had the rare opportunity to showcase their work at a local art gallery. At the exhibit’s premier, the women laid the foundations for the group, and will be celebrating their 30th anniversary next year.

“We had so much fun putting it together and coming up with it that we decided we wanted to keep meeting and form an organization,”  said Susan Ross, a founding member of Sistagraphy. “We were throwing around names and I came up with ‘Sistagraphy’ for ‘sisters in photography.”

Their mission is to have African American women photographers’ work showcased across the metro area. Reid told SaportaReport that since photography is a male-dominated industry, there are few places where women of color can exhibit their work. The members of Sistagraphy – all women of color – also serve their community by offering lessons to young people on how to use their smartphone cameras to document their experiences. 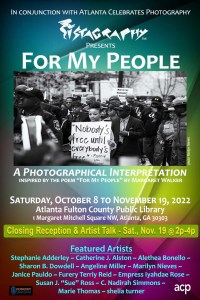 Official flyer for “For My People: A Photographical Interpretation” on display at the Fulton County Central Libary now until Nov 19. (Image provided by Sistagraphy.)

In the namesake of the exhbibition, “For My People,” Walker captured her New Orleans neighborhood through her words. The poem won the Yale Series of Younger Poets Award, making her the first Black woman to receive the prestigious honor.

“[The poem] was a powerful statement of racial pride and challenge to arrive at fighting and arise in the future,” Ross said.

“It was a challenge to be excellent and move the culture forward,” Ross said, “but I want [the visitors] to take appreciation for the range of interpretations that Black people can make of a particular topic; to look at the beauty and history of Black people as it’s portrayed through the various photographs and hopefully expand their minds and visions of what we can do and what we can be.”