A  new report from the U.S. Conference of Mayors calls upon the nation’s metropolitan areas to increase their investment in transportation. 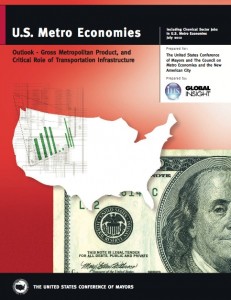 The nation’s cities should invest more in their transportation systems, in part to promote economic development. Credit: U.S. Conference of Mayors

The report presents a view from 30,000 feet and says nothing about where the money for construction is to come from and little about transit. It doesn’t say a word about metro Atlanta’s upcoming vote on a proposed 1 percent transportation sales tax, nor does it mention any of more than two dozen transportation referendums on ballots this year across the country.

But the 116-page report is choc full of interesting facts and forecasts about metro Atlanta (and other cities) that could help voters decide how to mark their ballots on the July 31 referendum. A few highlights include:

These are the sorts of insights that emerge from a report that focuses on the relation between gross metropolitan product and what it calls, “the critical roll of transportation infrastructure.”

Atlanta Mayor Kasim Reed chairs the transportation committee of the mayor’s conference and did not issue a formal statement when the report was released July 19 at a conference in Philadelphia.

Click here to see the full report and related documents.

The report that more than two dozen other transportation referendums are on the ballot in 2012 comes from the Center for Transportation Excellence. CFTE reports that a total of 27 measures are slated, but the figure does not include – for example – any of the 12 referenda on the July 31 ballot other than the one in metro Atlanta. CFTE describes itself as an organization committed to promoting transit.

Click here to read for about CFTE’s count of transit-related elections.

“There is no magic bullet to curing the nation’s infrastructure deficiencies. Metros will continue to lead the nation in population, employment, and overall economic growth, which will put further strain on infrastructure in areas that are already congested.”

And the conclusion ends with this statement:

“If the nation fails to dramatically increase its investment in transportation infrastructure, it will see congestion and its costs on families, commuters and businesses skyrocket, potentially doubling over the coming decade alone.”