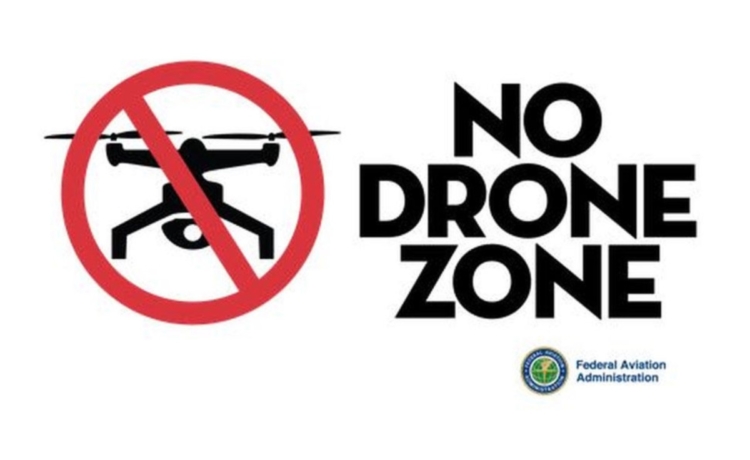 The 'No Drone Zone' warning signs posted by the FAA contain a plain image and message. Credit: fluerevue.de

With an alliterative name like “No Drone Zone” in place for Downtown Atlanta starting Thursday, it seems the souvenir hawkers would have come up with a humorous logo to offer the crowds around Super Bowl LIII. They had plenty of advance warning, and even design inspiration from the government. 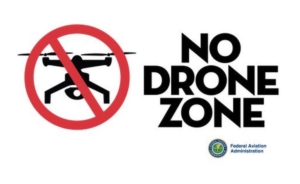 The ‘No Drone Zone’ warning signs posted by the FAA contain a plain image and message. Credit: fluerevue.de

Areas around the stadiums in Houston and Minneapolis were “No Drone Zones” when the Super Bowl came to those towns in the past two years, according to reports by the Federal Aviation Authority.

The FAA has a sporty little logo to go with the restriction – a drone covered by the international symbol for “No.” And the clearly statement message – “No Drone Zone.”

But, so far, the fan wear seems to consist largely of team jerseys, hats and the usual grab bag of memorabilia.

For its part, nflshop.com is sticking with tried and true items, including items from the Patriots’ shop that include Super Bowl LIII jerseys priced at $199.99, a flip coin for $99.99 and, for $299.99, an, “Autographed New England Patriots James White Fanantics Authentic Super Bowl LIII Pro Football.”

This isn’t to suggest the drone-free zones are a laughing matter. They’re not.

Just last week, flight arrivals at Newark’s airport were suspended after a drone was spotted over the nearby Teterboro Airport. Drones disrupted flights at London’s Heathrow Airport this month and in December at nearby Gatwick Airport.

The security measures are intended to address a super crowded sky as well-heeled fans fly into and out of metro Atlanta. More than 1,100 additional aircraft are expected to fly in and out of the region during the three-day period surrounding the game, according to a report by the FAA.

Nor do these reports suggest the federal government is clearing its planes from the sky during the bowl festivities. It’s not.

The U.S. Energy Department has selected this moment in time to conduct low-altitude helicopter flights over Downtown Atlanta and Buckhead. These flights were conducted Tuesday and Wednesday by Bell’s 412 utility helicopter. Flights resume on Sunday.

According to a statement from the Energy Department’s National Nuclear Security Administration:

Drone operators who get caught face a civil fine that could exceed $20,000, plus potential criminal prosecution, according to the FAA’s warning. Here are the terms as spelled out by the FAA: