It’s no longer who’ll win this election, but how we survive it 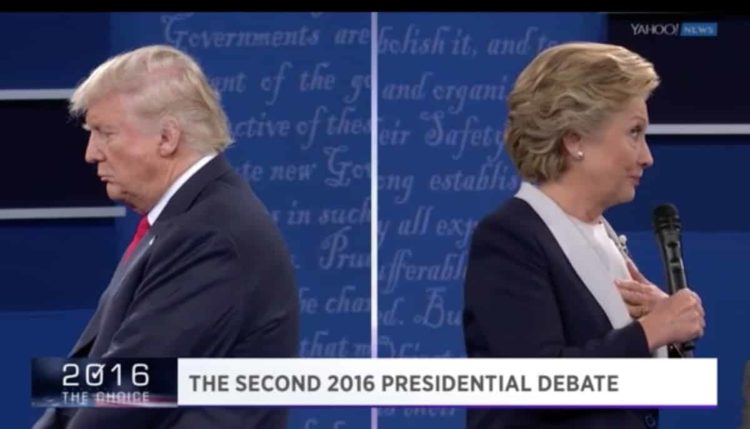 The body language of the second Trump/Clinton debate harkoned to a nasty divorce proceeding. Credit: yahoo.com

The athletic complex at Washington University in St. Louis, which has now been the site for five presidential or vice presidential debates, was erected in a corner of the campus where two ROTC buildings were burned during the height of the anti-Vietnam War movement in 1970. I mention this only to establish that the real estate where Hillary Clinton and Donald Trump met Sunday night has been no stranger to drama. 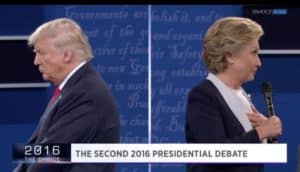 The body language of the second Trump/Clinton debate harkoned to a nasty divorce proceeding. Credit: yahoo.com

But in our political history there hasn’t been a confrontation in which the suspense was as dramatically ratcheted up as this one. In many ways this was merely ritual tension, but it was no less palpable for that.

Trump’s already fading chances were dealt a stunning blow Friday afternoon with the release of the now-infamous Access Hollywood tape. By Sunday night the drama wasn’t about whether he could turn the race around, but whether he would stay in the race, or whether his running mate, Mike Pence, would stay with him.

As uneasy Republicans walked away from him over the weekend, a furious Trump vowed to change course yet again and go there concerning the messy details of Bill and Hillary Clinton’s personal life. He telegraphed this by holding a press conference with four Clinton accusers shortly before the debate.

So much of the drama was already baked in before the town hall meeting-style debate commenced. The tension, with the women accusers sitting in the audience, was simply how far Trump would take kamikaze politics, and how Clinton would handle a moment she has surely rehearsed many times. The suspense had ceased to be about this race, but about how the nation will survive it. 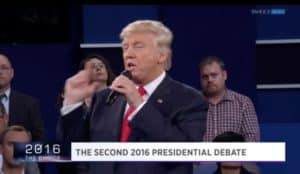 Trump, perhaps, could have moved the dial had he been more contrite and less defensive about his remarks in the 2005 videotape. Credit: yahoo.com

There was one point in that critical first half hour of the debate when Trump might really have made a dramatic change in this race, when Martha Raddatz asked a Facebook question about his offensive conduct from Jeff in Ohio: “Trump says the campaign changed him. When did that happen?”

The United States isn’t majority Baptist, but by and large, Americans love a good conversion story. If Trump had been able to voice any sort of confessional account of how his contact with the American people had caused him to change his evil ways and seek higher ground, he would have made agnostics retch. But he might have convinced enough of the faithful to slow some of the bleeding. Instead the Republican nominee remained defensive and accusatory, simply asserting that his behavior in the 2005 video wasn’t as bad as it had been made out to be.

At times throughout the rest of the evening Trump debated with Clinton, the moderators, and on a question concerning Syria, his running mate, Mike Pence. His threat to appoint a special prosecutor to investigate Clinton may have been unprecedented, but the rapid decline of his campaign made it seem just an empty threat. 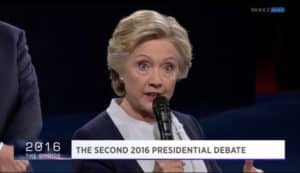 Hillary Clinton said her nominees to the Supreme Court would have “real life” experience in courtrooms and would uphold rulings including Roe v. Wade. Credit: yahoo.com

In the course of this debate there was the only prolonged exchange about the Affordable Health Care act of this campaign, at least some discussion about energy policy and a revealing exchange about each candidate’s approach to making Supreme Court appointments.

What was more likely to stick with many viewers were the stark visual images which the town hall staging of the debate enhanced. These were the body postures, not of a prize fight, but of a particularly edgy divorce negotiation. It seemed fitting in a way that the contestants couldn’t bring themselves to shake hands with each other until after the 90-plus minutes were over.

Clinton had her own recent revelations to deal with in the form of the leaking of excerpts from the speeches she made for Goldman Sachs, and Trump continued to pound her about her missing emails. A lot of this debate was about whether Trump could hang on to his base, and he may have scored enough hits on the Democrat he called “the devil” Sunday night to do that.

The next question is whether he can stop the self-deportation of party leaders from his campaign, which we’ll learn in coming days. The question after that would be whether Trump can win over enough undecided voters to make this a real race, and that question may have been answered Friday afternoon.