North Carolina dispute puts absentee voting in the spotlight, and a new face on fraud 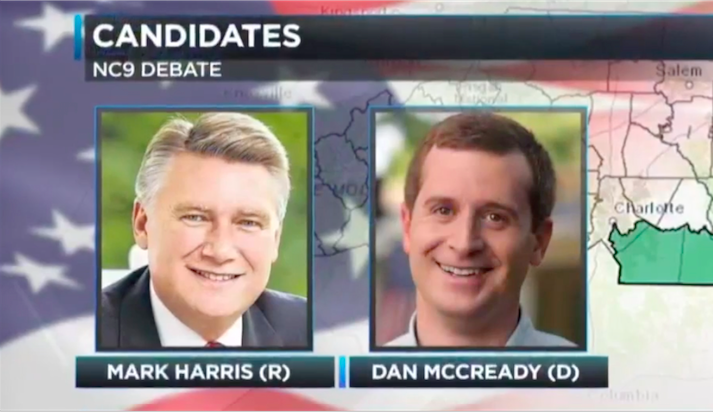 After all the talk of voter fraud and ballot integrity before this election, the race for the last seat in Congress has indeed come down to charges of election tampering. The figures at the center of of this controversy are not shadowy illegals, but a Baptist preacher and the vice-chair of the Bladen County, N.C., Soil and Water Conservation District board.

The preacher, and past president of the North Carolina Baptist State Convention, is Republican Mark Harris. He ran for the U.S. Senate in 2014, then set his sights on an incumbent Republican congressman, Robert Pittinger. In 2016 he lost his primary challenge by 134 votes, and earlier this year defeated Pittinger by 828 votes. He appeared to be a 905-vote winner in the general election over Democrat Dan McCready last month.

But last week the state elections board, which is divided evenly among four Democrats, four Republicans and one independent, unanimously refused to certify the election. The board cited potential voter fraud in the absentee ballots from Bladen and Robeson counties, on the eastern side of the 9th Congressional District, which runs along the state line with South Carolina all the way to the Charlotte suburbs. The board plans to hold a hearing by Dec. 21, and has the power to call another election if warranted.

The vice-chair is a Bladen County politico named McCrae Dowless who has managed voter turnout operations for several campaigns, including Harris this year. In 2016, Dowless accused a Democratic group of a “blatant scheme” to influence the election through the manipulation of absentee ballots. Republican Gov. Pat McCrory, who was in the process of losing his own election, quickly publicized the charges as evidence of “a massive voting fraud scheme.”

Two years later, Dowless — who has served a brief prison sentence for life insurance fraud — is linked in some of the affidavits gathered by Democrats to an operation in which hired campaign workers went door to door handing out absentee ballots and offering to complete them for voters.

There’s a strange sense of impermanence surrounding this story. The state elections board has been declared unconstitutional in a suit brought by Democratic Gov. Roy Cooper, and is being held together by the legislature only because it’s in the middle of this controversy. The Democratic chair of the board resigned over the weekend to avoid controversy over some tweets he’d written about President Trump. The current map for the 9th District has also been ruled unconstitutional, but was allowed by a federal court to remain in place through the November election. Dowless’ name doesn’t appear on Harris’ financial reports because he was an independent contractor for the Red Dome Group, a political firm which according to one story has been dissolved by the North Carolina secretary of state.

What is solid are the numbers, and they don’t add up. Michael Bitzer, a Catawba College professor, ran the numbers and found that to get the absentee vote he got out of Bladen County, Harris would have to have received the votes of all the Republicans, nearly all the unaffiliated voters and a substantial number of Democrats. There were other statistical irregularities as well. The percentage of minorities in Bladen and Robeson counties who were issued absentee ballots but didn’t return them was far higher than the state average.

Harris and other Republicans have argued there are not enough votes involved in the allegations to change the outcome of the election. But this was a razor-thin vote, and the story has brought absentee voting, which has gotten short shrift in the larger debate over voter fraud, into sharper focus.

On closer inspection, some of the same statistical irregularities have shown up in the numbers from Harris’ primary victory over Pittinger earlier this year, and even in their 2016 race. Pittinger has said his campaign was “fully aware” there were “unsavory people” in Bladen County. Joshua Malcolm, the Democratic vice-chair of the election board who lives in the district, said the fraudulent activity “has been ongoing for a number of years… has been repeatedly referred to the United States attorney and district attorneys to take action and clean it up. In my opinion those things have not taken place.”

If something like this has been going on in one corner of North Carolina for years, it’s likely to have been going on elsewhere. There are a lot of “unsavory people” out there.

Previous Article
Atlanta Transportation Plan gets approval, as advocates prod about previous recommendations
Next Article
What’s the point of being a theatre critic?

What We’ve Learned In A Year