The Northside Drive Pedestrian Bridge, built near Mercedes Benz Stadium, did not cost $10.4 million more than budgeted and the report of the cost overrun stems from an error in the city’s “Open Checkbook,” an independent audit has determined. 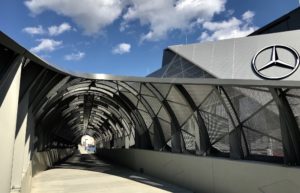 The audit is to be presented Feb. 3 to the Atlanta City Council.

Atlanta apparently is not going to be able to recover any construction costs. That was one possible outcome of an audit that was intended to, “assess compliance with construction terms and potential cost recovery,” according to a previous report released by Atlanta’s independent auditor, Amanda Noble. The city hired Talson Solutions to conduct the audit.

The bridge project came in at the approved, lump-sum budgeted amount of $23.2 million, the audit showed. No change orders were submitted by the contractor, Tjucker-based Georgia Bridge and Concrete, LLC, and its joint venture partner, SD&C, Inc., according to the audit.

The audit suggests fixing procedures that allowed for errors to be included in Open Checkbook – which is one of the city’s efforts to increase transparency in light of a federal investigation into financial transactions at Atlanta City Hall.

The audit discovered errors in addition to the misreporting of the project’s cost.

The audit cannot account for $487,125. The audit recommends the city’s chief financial officer try to identify that amount and, “make adjustments accordingly.” The management response agrees with the recommendation. In addition, the city observed:

The builder provided documents showing the city had overpaid by a total of $154,402. The builder enabled the city to recover the money by submitting a final invoice that included a reconciliation for overpayment. The audit observes:

The city paid $14,257 in interest fees for late payments submitted to the builder, according to the audit.

Of 35 payments made to the builder, eight exceeded the 45-day payment period that was stipulated in the contract. The longest delay was 132 days, according to the audit.

Part of the blame falls on the Georgia Department of Transportation and part of it falls on the city, according to the management’s response:

Noble, the city’s independent internal auditor, said in November the audit is complete. Findings had been presented to management for response and the audit is to be released once those responses are complete. Noble made her comments during the Nov. 13, 2019 meeting of the Atlanta City Council’s Finance Committee.

Noble said the city hired Talson Solutions to perform a closeout construction audit of the pedestrian bridge project. The audit was to, “assess compliance with construction terms and potential cost recovery,” according to a report released by the auditor.