Georgia Tech and the City of Atlanta are launching a Center for Urban Research to help revitalize communities and address racial inequities.

The Center’s mission is to build mutually beneficial partnerships with local universities as well as community, non-profit and municipal leaders across the city to support community resilience and sustainability, leverage private and philanthropic investment for research and programming, provide policy analysis and recommendations, and increase nonprofit capacity.

“Atlanta has been at the forefront in the fight against social injustice and the fight for equity and opportunity,” Atlanta Mayor Andre Dickens said in a statement. “It is in that spirit that the Atlanta community leverages our power at the local level to directly address economic inequities and lack of upward mobility.”

Dickens went on to thank Georgia Tech, Atlanta’s Historically Black Colleges and Universities (HBCUs) and the other partners in the Center for Urban Research. The mayor said those partnerships “will allow our city to demonstrate to the nation the immeasurable value of investments made in urban communities.” 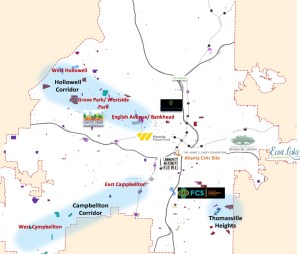 Center for Urban Research will focus its efforts in the blue-shaded areas of the City of Atlanta.

The Center for Urban Research will focus its efforts on six geographic areas of Atlanta encompassing 18 neighborhoods with about 20,000 residents. The areas are in northwest Atlanta, southwest Atlanta and southeast Atlanta.

“As far as I know, Mayor Andre Dickens is the first mayor in the country who has adopted a strategy of neighborhood revitalization in order to close the racial equity gaps in their city,” said David Edwards, founding director of the Center, in a telephone interview. “Over the next eight years, we expect to make material progress in improving the conditions in these neighborhoods.”

The timing is set to coincide with Dickens’ two terms as mayor, assuming he runs and wins re-election.

The Center will serve as a research, evaluation, and reporting hub to develop cutting-edge research on community development based on the Atlanta experience and best practices from around the world.

An advisory board of seasoned veterans who have been working with neighborhood revitalization efforts for decades will guide the work of the Center. They include former Atlanta Mayor Shirley Franklin — who has helped mentor Dickens — Integral CEO Egbert Perry, and CARE USA CEO Michelle Nunn.

“Georgia Tech’s new Center for Urban Research will create a collaborative space where faculty experts will work alongside municipal, community, and nonprofit leaders to strengthen and support the people of our city at the neighborhood level,” said Georgia Tech President Ángel Cabrera in a statement.

Cabrera went on to say the “combination of scholarship, research and outreach will develop solutions that address the daily needs of our hometown citizens – housing, quality of life, education, opportunity and more – in an effort to reduce inequity and build resilience everywhere.” 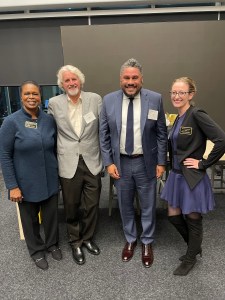 With its well-established history as a center for the advancement of civil and human rights and institutions dedicated to the development of Black leaders, Edwards said Atlanta is a perfect city to pioneer strategies to tackle racial inequality in our cities.

“The Center has some seed funding,” said Edwards, who is serving in a dual role as policy advisor for neighborhoods for Dickens and the City of Atlanta. “We are looking to fund the Center through public and private sources.”

Georgia State University, Morehouse College, Emory University, Spelman College, University of Georgia, the Atlanta University Center and Kennesaw State University will collaborate on research and service on the center’s scientific advisory and planning committee. Universities will provide faculty members and researchers. The Center will be housed within the School of Public Policy in the Ivan Allen College of Liberal Arts.

“We are honored to host activities that will have positive, real-world impact in the community we call home,” said Kaye Husbands Fealing, dean of Ivan Allen College. “We are excited to get started.”

For local government partners, the Center will provide policy expertise and guidance, long-term continuity by maintaining the “long view” and serve as an execution arm for advancing racial and economic equity goals. 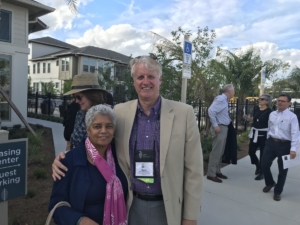 The Center for Urban Research reunites former Atlanta Mayor Shirley Franklin and David Edwards, who both worked with Purpose Built Communities. Here they were in Orlando in 2018 at a Purpose Built gathering. (Photo by Maria Saporta.)

“This work takes decades,” Edwards said. “The thrust of this is to use the Dickens’ administration as the launching pad for this city-wide effort.”

During a recent Transform Westside Summit, Edwards previewed some of the Center’s work – including efforts around Grove Park and English Avenue. The announcement of a Microsoft campus in the Grove Park community helped focus part of the Center’s efforts.

“Microsoft is coming,” said Edwards, who added they’ve been working with community stakeholders, including Microsoft. “We are happy with their engagement and how they understand the impact of what they’re doing.”

Still, Edwards, who worked in Mayor Franklin’s administration, said the city could have purchased one-third of the Grove Park community during the 2010 real estate recession, a purchase that would have given the city leverage to revitalize the area while ensuring permanent affordability for legacy residents.

Ideally, the Center will be able to take advantage of future opportunities.

“Funding for land acquisition is part of a larger portfolio of need that will be included in our efforts,” Edwards said.

“It’s exciting. We are taking advantage of having a mayor who is committed to doing this type of work.”