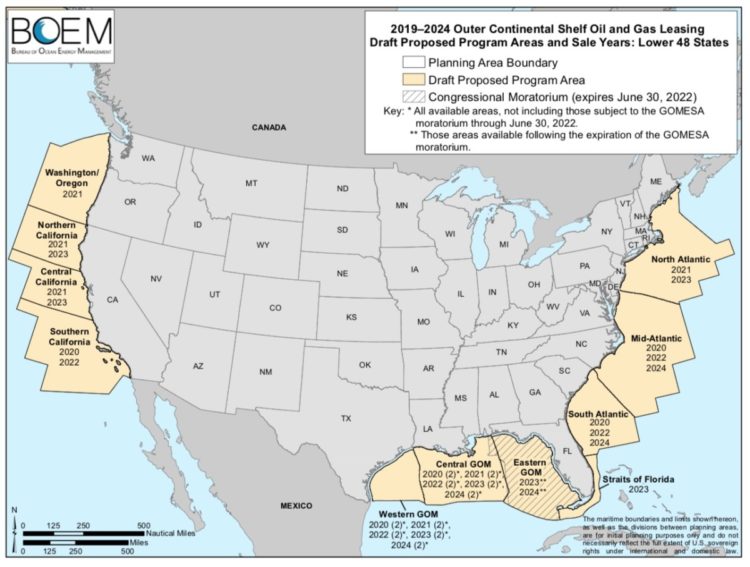 The offshore drilling proposal released by the Trump administration authorized oil drilling along in all of the nation's offshore continental waters. File/Credit: boem.gov

President Obama’s administration blocked President Trump from expanding the area open to offshore oil drilling, including off Georgia’s coast, a federal judge has ruled. On a related front, the Georgia House approved Tuesday a resolution opposing the exploration and drilling for oil off Georgia’s coast. 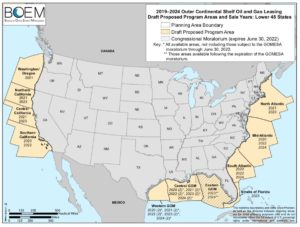 The offshore drilling proposal released by the Trump administration authorized oil drilling along all of the nation’s offshore continental waters was overruled by a federal judge. File/Credit: boem.gov

The passage of Georgia House Resolution 48 marks the first time either chamber of the state Legislature has taken a stance against oil exploration and extraction off the Georgia coast.

Jennette Gayer, director of Environment Georgia and an advocate of HR 48, observed immediately after the vote:

The federal court ruling against Trump’s offshore drilling plan upheld the case brought by an environmental group, the League of Conservation Voters. The group filed a federal lawsuit against Trump and his administration, plus two interveners on Trump’s side – the American Petroleum Institute and State of Alaska.

The ruling obliterated the heart of Trump’s executive order to revoke Obama’s decisions to withdraw from oil exploration and drilling land on the Outer Continental Shelf off the Arctic and Atlantic oceans.

Specifically, the ruling eliminated a section of Trump’s executive order that reverted the territory that is withdrawn from drilling to the marine sanctuaries as they were designated on July 14, 2008. 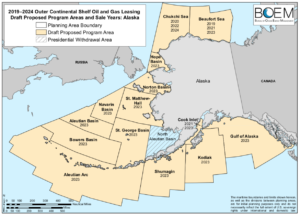 The plan to open the entire coastline of Alaska to drilling under a proposal released by the Trump administration was overturned by a federal judge. File/Credit: boem.gov

The environmentalists had contended that only Congress has the authority to revoke a president’s ruling to withdraw areas from the Outer Continental shelf for mineral leasing. This is how the judge summarized their case:

Gleason later observed of a series of opinions by U.S. attorneys general:

At this point, a decision by President Eisenhower, a Republican, to create the nation’s first undersea park at a coral reef off the Florida coast found its way into Gleason’s ruling:

Gleason was nominated to the federal bench by President Obama. Republican Alaska Sen. Lisa Murkowski supported the nomination of Gleason, a former Superior Court judge in Anchorage. According to a statement from her office, Murkowski said during her remarks on the Senate floor: