Occupy Atlanta not quite an Arab Spring, but stays course, message with social media

Occupy Atlanta has slipped out of the nightly news, but the protesters haven’t gone away.

Rather, participants are expanding their use of social media to spread their message and schedule events, including a Variety Show complete with a fund-raiser for the organization’s legal fund. The party is set for Dec. 29 at Manuel’s Tavern.

This is hardly the stuff of the Arab Spring, the pro-democracy uprisings that harnessed social media to topple four dictators and reshape global politics in the course of a year.

On the other hand, this is a far cry from arranging hook-ups by Twitter or sharing tips on tapas via foursquare. 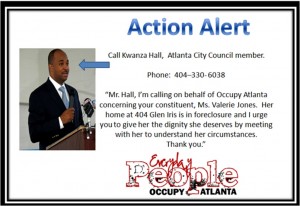 Consider the case of Kwanza Hall, an Atlanta city councilman who’s tried to be even-handed in accommodating the group as it established itself and its boundaries. Hall’s district encompasses downtown Atlanta, where Occupy Atlanta has established its headquarters.

Hall’s office was flooded with calls on Dec. 8 at the behest of an email campaign launched by “Everyday People Occupy Atlanta.”

The email urged recipients to call Hall’s office and ask him to intervene in the pending foreclosure of a house in his district. The home on Glen Iris Drive had been on TV news in recent days as a host of politicians and other community leaders joined Occupy Atlanta in saying the foreclosure proceedings should be stopped.

Hall’s schedule already was full that day. He was facing topics such as the redistricting of council districts, and the council’s efforts to work with the Atlanta school board on a host of challenges, and any number of his ongoing constituent services.

Hall put those issues aside and went to visit the home. Foreclosures aren’t the purview of Atlanta councilmembers, but he talked with those on site and later had this to say:

“I stopped by this afternoon to talk with my constituents at 404 Glen Iris Drive. Their story is complicated and, like so many families impacted by the national mortgage and lending crisis, they do not know who to trust or where to turn for help. I am reaching out this evening to contacts in my network to identify a few knowledgeable people who may be able to help. My biggest concern at the moment is the welfare of this family. I am hopeful that the sudden media spotlights placed on some of our most vulnerable Atlantans over the past few days will not invite a new wave of predators into their lives.”

The home is still occupied, and over the weekend at least one person who lives there travelled to Riverdale to help with the occupation of a home there.

The video of that trip is on You Tube at http://www.youtube.com/watch?v=bHhpi6SoqMo.

Occupy Atlanta has a website, of course – a WordPress page at http://occupyatlanta.org/. The page has two columns flanked by a column of updates. A click of a button will translate the entire page into one of more than 50 languages.

And there’s a Facebook page that’s liked by just over 16,000 fans. That site is at www.facebook.com/OccupyAtlanta.

Along the way, fans are posting their own photos to Flickr and videos to YouTube. Links to similar groups in faraway cities are posted on many pages.

One link is for a poetry book that will be raffled off at the organization’s Variety Show at Manuel’s Tavern. Readers see that the author, Sara Amis, is said to be a graduate student at the University of Georgia and her work has been adapted for use on National Public Radio.

Evidently, the book is about what a character named Sophia would text about if Sophia were to send out text messages. Just 18 books were produced according to http://www.papaveria.com/portfolio/the-sophia-leaves-text-messages/