A test case for mining a valuable sand from the edge of the Okefenokee Swamp is the centerpiece of the new proposal for digging up an 898-acre stretch along the famed Trail Ridge, on a site located in Georgia about 40 miles northwest of Jacksonville. 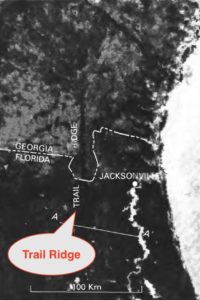 Trail Ridge runs at least 100 miles along a North-South axis as shown in this satellite image from a 1989 report by the U.S. Geological Survey. Credit: USGS

This sand that forms Trail Ridge is such a precious commodity that it spurred this remark in a 1989 report by the U.S. Geological Survey:

Demand for the product has only increased. The U.S. now imports almost 100 percent of the material and the top two sources are Japan and Russia. The Commerce Department is conducting an investigation into sources of a material with national security implications because of its use in military aircraft, satellites, missiles and munitions, and naval vessels.

The scaled-down mining proposal was delivered a month after the company withdrew a proposal to extract sand along a larger tract. The initial application appeared to be in deep trouble, and the company withdrew it Feb. 7, before the U.S. Army Corps of Engineers, Savannah District, issued a ruling that could have prejudiced future consideration of a mining application.

The company devised the current proposal after consulting with the corps, which oversees such applications, according to a March 13 notice released by the corps.

The latest permit application seeks permission to, “construct a demonstration mining project on 1,042 acres that will mine heavy mineral sands on 898 acres over 6 years,” according to the notice from the corps.

The original extraction plan was to have affected 1,450 acres.

Here’s how the corps characterizes the latest proposal for a smaller mine to be operated within the same footprint of the larger proposal: 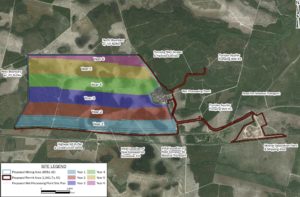 Each band of color shows the area to be mined in each year of a six-year extraction process, according to the proposal by Twin Pines Minerals. Credit: U.S. Army Corps of Engineers

One thing that hasn’t changed is the composition of the heavy mineral sand the company, Twin Pines Minerals, LLC wants to extract from a portion of Trail Ridge.

The 1989 report from the U.S. Geological Survey provides a snapshot of the mining activities at Trail Ridge. The major discovery dates to the years after World War II, when mining along Trail Ridge was started in 1949, in Florida’s Clay County, by the E.I. Du Pont de Nemours and Co. – commonly known as DuPont.

The public phase of the current, ongoing effort to mine along the ridge started in Summer 2019. The first proposal elicited more than 22,000 comments from a group of respondents that included, “resource agencies, politicians, environmental groups, students, and members of the public,” according to the notice from the corps.

The mining company received copies of these letters on Oct. 7, 2019. Four months later, the company withdrew its application, on Feb. 7. On March 6, the corps received the revised proposal. 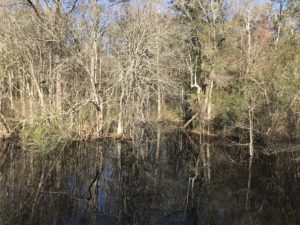 A creek located west of Little Suwanee Creek disappears into the trees and brush that grow in a sunny area on the northern edge of the Okefenokee Swamp. Credit: David Pendered