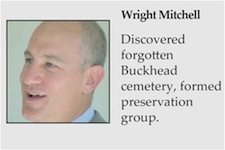 When Wright Mitchell was on a run with his two dogs one day, he inexplicably turned up Chatham Road in Buckhead, a street not on his normal route. As he neared the top of the hill at West Paces Ferry, he looked to his left and saw a strange stone obelisk sticking out of the trees and bushes on an abandoned lot.

“It seemed completely out of place so I went in to investigate and discovered that one of Buckhead’s most historically significant cemeteries had been right there on the corner and had become completely overgrown and neglected,” Wright told us in our accompanying Moments HD video.

Wright, a partner at the labor and employment law firm of Constangy, Brooks & Smith, led his dogs into the woods and pulled back bushes and vines to uncover old stones and long-hidden inscriptions.

“As I started reading the names of the people and the inscriptions on the headstones – there were people that had been buried there in the 1800s all the way up until the 1940s. And some of the people, based on the nature of the headstones, obviously were people of wealth. I spent about 20 minutes just wandering through the cemetery amazed that this had been here all these years – I grew up in Buckhead, I’ve driven past it a million times and never knew it was there,” he said.

He called on Sam Massell, former Atlanta mayor and current president of the Buckhead Coalition, and asked if he thought it was a good idea. Sam was enthusiastic and volunteered to be his first board member. Wright formed the Buckhead Heritage Society, began raising funds and set to work on its first project: restoring the hidden Harmony Grove Cemetery.

According to the groups website, the group “enlisted the services of mortuary archaeologists, landscape architects and headstone repair experts during the restoration, which lasted approximately three years and received the 2009 Excellence in Rehabilitation Award from the Georgia Trust for Historic Preservation. Harmony Grove Cemetery now exists as a functional green space in Buckhead and a tangible link to Buckhead’s rural past. Notable occupants of Harmony Grove Cemetery include Confederate Civil War veterans, prominent local businessmen, the father of Dorothy Shay (better known as “The Park Avenue Hillbillie”) and even the great-grandparents of actress Julia Roberts.”

Further archaeological study found evidence of African-American graves that could be the slaves of a nearby landowner who was buried in the cemetery in 1872. The group carefully restored the cemetery and today manages and maintains it as a green space, nestled quietly amidst the mansions and busy streets of Buckhead. 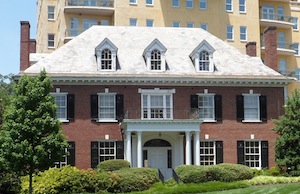 Randolph-Lucas House will be moved to Ansley Park due to efforts by the Buckhead Heritage Society.

Randolph-Lucas House will be moved to Ansley Park due to efforts by the Buckhead Heritage Society.[/caption]“We formed the organization in 2006 and restored Harmony Grove Cemetery. Since that time we’ve hired an executive director, we have a part time assistant, we have a board of approximately 15 people, we have more than 500 members,” Wright said.

The Heritage Society has fought to preserve other historic treasures in Buckhead, most recently making the news with an announcement this month of the planned moving to Midtown’s Ansley Park of Peachtree Road’s prominent Randolph-Lucas house, built in 1924 by Thomas Jefferson’s great-great-grandson. Wright and Executive Director Erica Danylchak worked closely with the City of Atlanta, the 2500 Peachtree Condo Association and other partners behind the scenes to create an opportunity to secure the future of the house that has long been threatened with demolition.

The group’s website catalogs other historic places and structures in the area and sponsors events and lectures to celebrate Buckhead’s history and raise funds for its efforts. Buckhead Heritage is also partnering with Livable Buckhead to make sure that Buckhead’s story is incorporated into the new greenspace initiative.

But it all started with that unintended turn up Chatham Road on an otherwise routine afternoon of exercise. Standing in the living room of the Randolph-Lucas House as we filmed our video earlier this month, Wright reflected fondly on that day.

“Knowing what I know now about what fulfills me, which is historic preservation, finding Harmony Grove Cemetery in that overgrown, unkempt parcel of woods was my Moment.” 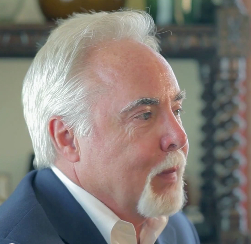 Next week in Moments: George McKerrow

Next week in Moments: George McKerrow, restaurateur, on a life-changing decision he made atop Mt. Kilimanjaro on January 1, 2000.