Sofia Coppola has a huge crush on Bill Murray.

So what? Most of us, male or female, have a huge crush on Bill Murray. For decades.

But Coppola, bless her heart, really fell for him when she nailed the mythic cool the actor embodies in her 2003 film, “Lost in Translation.”

Their new collaboration, “On the Rocks,” isn’t quite on the same sublime level, but it has its merits, most notably a stinging nostalgia for a pre-pandemic New York that seemed like it would never disappear. 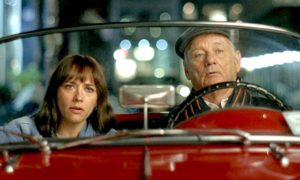 But gone it is, at least for a while, as death rates rise and an ex-President rails.

As she did in her earlier film, Coppola pairs Murray with a much younger woman. In this case, it’s his daughter Laura (lovely Rashida Jones). Laura has a yummy husband, Dean (Marlon Wayons), a huge Soho loft, two adorable little girls and a book contract.

But something doesn’t feel right. As Laura sinks into the everydayness of school lunches, ballet classes and writers block, she senses her husband, who’s launching a new business, is having a much more exciting life. He not at home as much as he used to be, and there’s this gorgeous long-legged assistant with whom he spends a lot of time. A lot.

Enter Daddy, aka, Felix, aka Bill Murray, aka Francis Ford Coppola (well, we’ll get to that in a bit).

Felix is a wealthy art dealer, a bon-vivant from an earlier era who can charm everyone from a Park Avenue doyenne to a young Irish cop (a hugely endearing scene) to a Russian ballerina who’s making ends meet by waitressing in a posh restaurant. His flirtations are essentially harmless, but oddly dated (hmmm, could Felix be Coppola’s own larger-than-life Daddy, Francis?)

Operating on the notion that it takes a womanizer to know one, Felix decides he and his baby girl may need to do a little sleuthing.  For Felix, that means picking her up in a candy-apple sports car equipped with champagne and caviar. 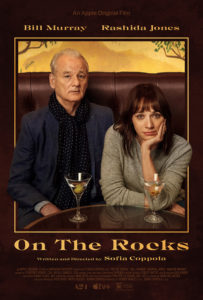 Movie poster of “On the Rocks”

“On the Rocks” is enjoyable without being especially memorable.  Little bits are surprisingly funny – such as the oh-so-Manhattan mom who somehow always lands up in line behind Laura as they drop off their kids, ready with a non-stop monologue about her dating life. Or Laura muttering to Dean that she hates being the “buzz kill” who insists on scheduling things like recitals, dentist appointments), etc.

And we’ve probably all been to a spouse’s work party where we’re the last person anyone wants to talk to.

Murray and Jones are sweet together, but they lack that spark he and Scarlett Johansson shared in “Lost in Translation.” Maybe it’s the father/daughter thing.  Or maybe…

There’s a funny little throwaway where, as part of Felix’s Womanizing 101, he explains to Laura that the Plaza Hotel is great for affairs because it has three different exits to the street.

But post-pandemic, that seems so long ago. So……huh?  And imagine if Harvey Weinstein were saying that, not Bill Murray.

“On the Rocks” is available for viewing only on Apple TV+.