The Big Three worker training programs – re-skilling, up-skilling and now, out-skilling – may best be addressed by credentialed, online classes that students have found – even as policymakers are focused on tuition-free and debt-forgiveness campus-based programs. 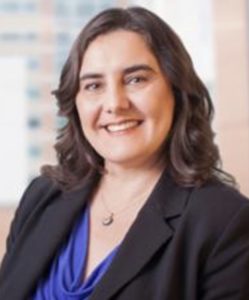 “Between the advent of technology and the fact that we’re going to live 100-year lives, there will be a constant need for re-skilling and up-skilling and, as I heard this week, out-skilling,” said Yakut Gazi, associate dean for learning system at Georgia Tech Professional Education. “Online is the most promising approach to all this.”

The first two “-skilling” programs Gazi cited are well-worn practices in today’s disruption economy. The last one, “out-skilling,” in an emerging effort that involves skills needed to transition from a layoff to a new line of work in a new company, according to a Jan. 6 report by wsj.com.

Cost is a major driver in this ongoing shift from a campus-based degree to one earned online. Tech charges less than $10,000 for courses that lead to a master degree in one of 13 sectors that are in high demand, including computer science, analytics and cybersecurity.

A masters degree is the classic example of up-skilling. However, the days of companies paying for the degree are passing, as they have for benefits such as health insurance. While details on these sorts of benefits are not readily available from the federal Bureau of Labor Statistics, according to a report by the trade journal GovExec Daily, a start-up received seed money last year to manage benefits for contract workers and other freelancers who don’t want to serve as their own human resources department, according to techcrunch.com. 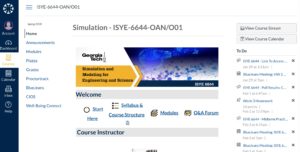 Now that such perks are fewer and farther between, enrollment in online programs nationwide and at Tech is rising. Individuals still want the degree, and are looking for cost savings now that they have to pay for it themselves.

The report of the latest available data by the independent research division of the U.S. Department of Education shows the proportion of all students enrolled in online undergraduate programs doubled from 2004 to 2016, from 4.9 percent to 10.8 percent. The rate of increase among black undergrads was even higher – the proportion tripled during the same time frame, from 5.1 percent to 14.9 percent, the report showed.

Among students seeking post-baccalaureate degrees, 28.9 percent of enrolled students intend to earn their advanced degree completely through a distance learning program, according to a related report from the DOE.

At Tech, a year-over-year growth rate in graduate enrollment of 17 percent was fueled almost exclusively from online growth, from 2018 to 2019, Gazi said.

“It’s very difficult for a person to put hands in their own pockets for retraining and professional education because they think things like, ‘When I do that, I’m taking money out of my daughter’s college fund,’” Gazi said. “Now students see that they can pay out of their own pocket; $10,000 is within the reach of a lot of people.” 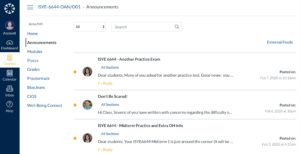 Announcements from the instructor are delivered to a centralized page and provide opportunities for students enrolled in this online class at Tech to communicate with the instructor. Credit: Georgia Tech

Gazi said online degrees are less expensive because of the scale and management of the program.

The fixed cost of teaching a course is incurred just once – when the online class is being developed and prepared. The scale of the program brings down the per-unit cost of delivering a class, Gazi said.

The quality of the online class is protected by steps that begin with the development of the curriculum, Gazi said. For starters, a professor works with an instructional designer, whose jobs is to make sure the goals of the program are actually delivered to students.

“It’s the exact opposite of the traditional method, where there’s a textbook and what the professor wants to teach – and students say the material on the test wasn’t covered in the lectures,” Gazi said. 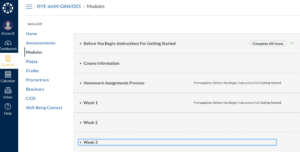 Students can track their progress in a course through a set of modules that are available on the website of an online class. Credit: Georgia Tech