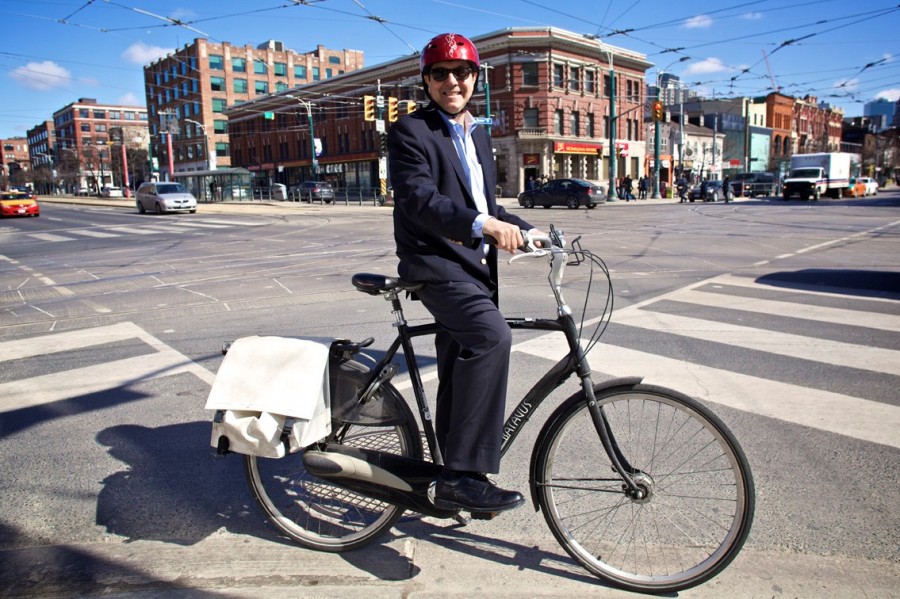 For city dwellers, there is no freer feeling than when people on foot or bicycles take over a street that’s been closed off to cars.

That feeling is so infectious that it is spreading throughout the country and the world – getting a foothold in a multitude of cities including right here through Atlanta Streets Alive – the next one will be held on Sunday, Sept. 27.

That will culminate the three day National Open Streets Summit, convening at Ebenezer Baptist Church’s Community Events Center from Sept. 25 to 27, when people from throughout the United States will gather to discuss best practices of how to make our cities more humane.

The keynote speaker of the National Open Streets Summit will be international visionary Gil Penalosa, former parks commissioner of Bogota, Colombia – the city that launched Ciclovia – the open streets concept internationally – and now attracts 1.3 million people on a weekly basis. 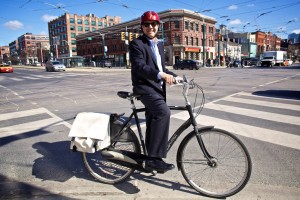 Penalosa also is the co-founder of the 8-80 Cities nonprofit. The last time Penalosa was a featured speaker in Atlanta was at Park Pride’s Greenspace conference in 2012 when he explained 8-80 Cities, an organization aimed at orienting cities for people. If a city is welcoming for 8-year olds and 80-year-olds, it will be welcoming for everyone.

“Public spaces have to be wonderful places for 8-year-olds and 80-year-olds,” Penalosa said. “When we look at cities from the air, the largest public spaces are streets. The cities we have been designing for 100 years have not been designed for people.”

The two day Open Streets Summit is a partnership between the Alliance for Biking & Walking and the Street Plans Collaborative. They have been documenting the rise of Open Streets nationally and internationally, and they are bringing together experts from the Open Streets Projects to Atlanta to share their experiences and lessons. It is the third annual Summit for the partnership.

Pinalosa has described this moment in time as a “tipping point” for the Open Streets movement nationally and internationally. 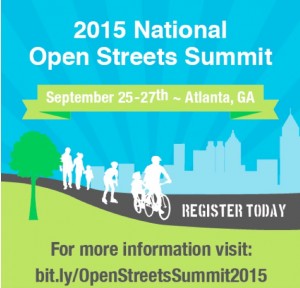 In Atlanta, the Atlanta Bicycle Coalition has been spearheading the effort through Atlanta Streets Alive.

The City of Atlanta recently awarded Atlanta Streets Alive a $150,000 grant from the 2016 fiscal year budget to support the initiative.

“A big thank you to Mayor Kasim Reed and the Atlanta City Council for approving this important source of support for open streets in our city,” Rebecca Serna, executive director of the Atlanta Bicycle Coalition, wrote in an email to members. “Now, we couldn’t be more excited for Atlanta Streets Alive Highland+!”

The 4.5 million loop will be open to people on foot, bicycle or with other human-powered mobile devices, and the streets will be closed off to motorized traffic.

The event will take place from 2 p.m. to 6 p.m., and it will begin with a bicycle parade starting at North Highland and Virginia avenues (start lining up at 1:30). 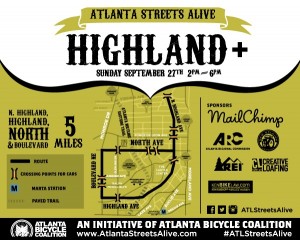 A range of activities hosted by a variety of organizations and businesses, and an interactive map can be downloaded on your phone, thanks to the folks at Walkabout.

In a recent interview with the Alliance for Biking & Walking, Penalosa summarized it this way:

“Open Streets is transformational. It really changes minds,” Penalosa said. “All the time we hear people say, ‘No, we cannot do this [build bikeable, walkable communities]. We need a change of culture, a change of mind.’ Well, Open Streets is changing minds more than anything else.

“First, people realize that streets are public spaces. Even though it’s right there in front of our noses; even though streets are, on average, 25 percent of the city; and even though streets — once you exclude housing and private space — are between 70 percent and 90 percent of public space, we don’t see it as public space. We see it as space to move cars from point A to point B, 24-7. With Open Streets people realize, ‘This belongs to everyone: drivers and non-drivers, old and young, rich and poor.’ That change of mindset is transformational.”