Ozone season has not arrived early in metro Atlanta and across parts of Georgia. The haze and poor air quality last week was the result of smoke from agricultural fires and should begin to dissipate by Monday, according to the state climatologist. 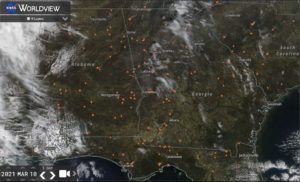 “This is not an ozone issue,” Bill Murphey, Georgia’s climatologist and chief meteorologist for the state Environmental Protection Division, said March 12.

“This is particulate pollution, mostly due to smoke from prescribed burns or agricultural fires,” Murphey said. “Every now and then you get a small wildfire or acreage fire in this environment, when the humidity is so low.”

The particulate pollution was so striking that the state Climate Office posted on its Facebook page a satellite image of the pollution. Smoke from more than two dozen fires is clearly visible in Georgia alone.

“If you’re downwind of any of those small fires, you’re going to pick up smoke, and it’s hazy,” Murphey said.

Smoke was particularly intense over the Columbus area during the middle of last week, Murphey said. Visibility was down to three miles, he said. Some smoke was drifting into Georgia from fires in Alabama, he said.

Albany was another danger area, where Murphy said a Code Orange Alert had been issued. Code Orange Alerts advise individuals with lung and heart disease, asthma sufferers, older adults and children to limit their time outdoors. 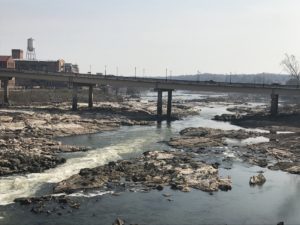 Smoke from fires obscures the tree line in the Chattahoochee Valley, less than a half-mile south of Phoenix City Riverwalk that leads to Columbus. Credit: David Pendered. March 12, 2021

In metro Atlanta, breathing difficulties and coughing had become commonplace by the end of last week among some individuals with respiratory problems. It was especially striking because the air has felt cleaner as traffic has been less congested during the pandemic over the past 12 months. Less traffic congestion has reduced the concentration of tailpipe exhaust that can fuel breathing difficulties for some sensitive groups.

Murphey said on March 12 the forecast indicated the smoke should no longer be a threat in metro Atlanta or statewide by the start of this week.

“The good news, the slightly good news, is that we have a frontal system approaching Monday and Tuesday, and the hope is that will help with dispersion and help clear out some of this,” Murphey said. “Not completely. But it will help a lot.

“We’ll get more dispersion and even some rain in the forecast, so hopefully that will help,” Murphey said. “This week, we didn‘t have any rain and we had high pressure over us … which gives stable conditions and you don’t get vertical mixing. It kind of traps the smoke.” 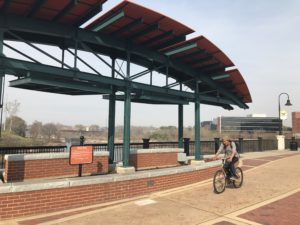 A cyclist peddled through through the smoke that is evident less than a half-mile north of the Phenix City Riverwalk, which connects the Alabama city with Columbus. David Pendered. March 12, 2021

On March 12, Accuweather’s air quality app warned of “Poor” air quality for fine particulate matter. This type of air pollution is especially dangerous because it can enter both the lungs and the bloodstream. PM2.5 stands for pollutants that measure less than 2.5 micrometers.

Accuweather’s app warned of the PM2.5 reading of 56: