Georgia needs to do all it can to deepen the Savannah port if it wants to remain a competitive.

That is the message that Roberto Roy, Panama’s Minister for Canal Affairs who is chairman of the Panama Canal Authority, delivered to Gov. Nathan Deal and Atlanta Mayor Kasim Reed on Thursday afternoon.

“It is a critical issue for Georgia and for Savannah,” Roy said in an interview outside the Governor’s office. “The reason is that the shipping fleet is totally changing. It is not only a matter of the ships being bigger The key is that the most important variable is the fuel costs.”

“That is the game changer,” Roy said.

Right now, the Panama Canal expansion is expected to be completed in April 2015, which will permit the bigger ships, known as “Post-Panamax,” to travel through the canal. As a result, a host of ports around the world also are looking to deepen their channels to accommodate the larger ships. 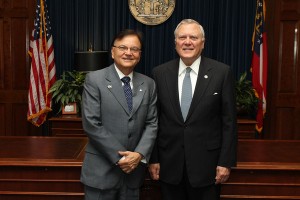 “You have to do the dredging because the fleet is radically changing,” Roy said about Georgia’s plans to deepen Savannah’s port. “In order for Savannah to compete, it needs to accommodate the big ships. If Savannah doesn’t, other ports on the Eastern seaboard will. Norfolk already does. It’s critical for Savannah to start dredging as soon as possible.”

Roy, who will be spending Friday in Savannah to meet with officials from the Georgia Ports Authority, understands that now it is largely up to the federal government to invest in the deepening of the Savannah port.

Georgia already has received the necessary federal approvals for the project, but it will need hundreds of millions of dollars in order to complete the deepening of the port. Mayor Reed has been working with state leaders to build support for the project within President Barack Obama’s administration and with other Democratic leaders.

“Georgia needs to do a hard lobbying in Washington to get approval for this dredging,” Roy said. “The message is the fleet is changing, and we are already late.”

Roy has a special affinity for Georgia. He received a mechanical engineering degree and his Master’s degree in industrial management from Georgia Tech, graduating in 1972. For old time’s sake, he had lunch on Thursday at the Varsity — dining on chili dogs, and he even got to ride the Ramblin’ Reck. He was scheduled to have dinner with Georgia Tech President Bud Peterson Thursday evening.

“Our relationship with Georgia is very long,” said Roy, acknowledging that it was President Jimmy Carter who arranged the transfer of ownership of the Panama Canal from the United States to Panama.

But the ties go deeper.

“It’s on several fronts. Some very prominent citizens — owners of corporations and politicians — went to Georgia Tech,” Roy said. “And now with the canal expansion, we have a direct link. We need to strengthen the relationship between Panama and Savannah and Georgia.”

In addition to chairing the board of Panama Canal Authority, Roy also is the chief executive of Metro de Panamá, a public transit system that is being built as one of the national government’s flagship infrastructure projects.