The hotspots for pandemic eviction filings in metro Atlanta have been in non-white, lower-income areas of south Fulton and DeKalb counties and in Clayton County, according to a report from the Federal Reserve of Atlanta. 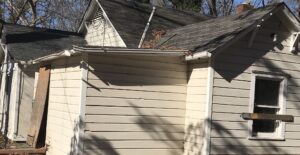 Vacant housing has a destabilizing effect on neighborhoods, whether the unit became vacant through foreclosure or eviction. This home is in the Oakland City neighborhood of southwest Atlanta. Credit: David Pendered

The pandemic-related eviction rate was 97.4% in a College Park Census tract where 92% of residents are Black, indigenous or people of color. Household earnings amounted to 45% of the area medium income, according to the report’s account of Census tract 106.04 for a one-year period ending April 16.

The pandemic-eviction rate was 57.2% in a district on Clayton’s southeastern border, between Stockbridge and I-675. The BIPOC population was 77% and household earnings were 42% of the area median income, according to the report.

Throughout these neighborhoods with high rates of eviction filings, significant social upheaval could affect both the evicted and those who remain after the eviction moratorium expires. 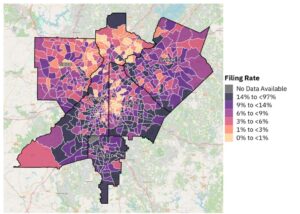 The darker colors in this map relate to the higher number of pandemic eviction filings as recorded by Census tract through April 16. The chart is based on an extrapolation of Fulton County filings because Fulton stopped reporting information in September 2020. Credit: Atlanta Fed

The evicted face immediate dislocation, and all that means for access to work and children in schools, as well as ongoing challenges in finding a new residence with an eviction on their credit history. The report observes:

For those who remain, the removal of non-paying neighbors does not mean a line of credit-worthy people of ample means are waiting to move into a vacant residence. The neighborhood may become a place of transition, as some who will be applying for a residence will have marred credit because their credit was marred by an eviction filing.

A comparison may be drawn from the foreclosure crisis of the Great Recession. Foreclosure reduced a dwelling’s value and had a ripple effect across neighborhoods as vacant dwellings were not maintained and sometimes attracted criminal elements. These remaining dwellings were described as “trapped underwater” because the owner was trapped by a home loan greater than the dwelling’s current market value.

The eviction report was issued June 3 by the Atlanta Fed’s Center for Housing and Policy Community and Economic Development Department. At the time, the eviction moratorium was slated to end June 30. It’s now been extended through Oct. 3.

This chart shows the Top 10 Census districts for pandemic eviction filings, using an extrapolation of figures for Fulton County because Fulton stopped reporting the information in Sept. 2020. Credit: Atlanta Fed

The Atlanta Fed intended for the report to send a cautionary message to policy makers in charge of providing relief to renters affected by the coronavirus pandemic, according to the brief.

One source of relief is the $100 million in federal relief funds that have been provided to, but not disbursed by, the City of Atlanta and the five core counties of Clayton, Cobb, DeKalb, Fulton and Gwinnett. The figure is derived from a June 30 report from the Treasury Department. Treasury is expected to released updated numbers this month.

To report the data, the study’s authors tracked eviction filings across the five counties from January 2020 to April 2021. One important caveat is that filings for Fulton County are incomplete because Fulton stopped reporting the information after Sept 18, 2020, according to the report.

The report cites what it calls three “key take-aways.” They are: