All apartments at Parkside are priced at 70 percent AMI or lower. (Photo by Hannah E. Jones.)

Parkside features 182 units — including one-, two- and three-bedroom apartments — with each unit priced at an affordable rate. In the new building, 57 units are priced at 50 percent area median income (AMI), 96 units at 60 percent AMI and 29 units at 70 AMI.

A look at the apartments at Parkside. (Photos by Hannah E. Jones.)

The apartment building offers living spaces with many amenities, including gazebos, a playground, a gym, a business center with computers and a garden open for resident use. The new complex sits at 1314 Donald Lee Hollowell Parkway, offering easy access to nearby parks, businesses and public transit.

Several city and state entities worked together to pull off this project, including the City of Atlanta, Atlanta BeltLine, Inc., Invest Atlanta, the Georgia Department of Community Affairs and Prestwick Development. 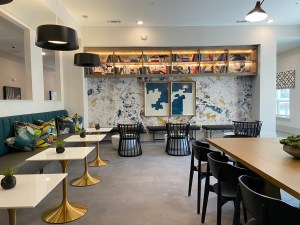 Prestwick broke ground in 2019, and the complex opened in November 2021. The community is now fully occupied, but interested folks can join the waitlist.

The building is only one block away from the Bankhead MARTA station and Proctor Creek Greenway, with the Atlanta BeltLine Westside Trail right around the corner, offering numerous ways for residents to ride, bike and walk around the community. Parkside also rubs elbows with two local greenspaces, Maddox Park and the Westside Reservoir Park, providing easy access for residents and families to get outside.

The apartment building sits within a BeltLine Overlay District, an inclusionary zoning measure that requires new residential developments to allocate 10 percent of the units at 60 percent AMI or 15 percent at 80 percent of AMI. Instead, the team opted to make the whole development affordable. 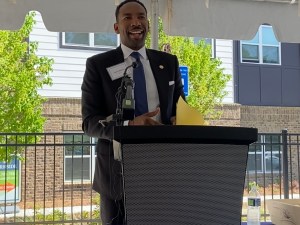 Atlanta Mayor Andre Dickens, regarded as a staunch affordable housing advocate for the city, joined the ribbon cutting to celebrate the project. Dickens campaigned on the promise of creating and preserving 20,000 affordable housing units within eight years, and he said that so far this year, the city has secured 1,500 units.

“Housing is foundational to a community’s health,” Dickens said during the ceremony. “Right now, we don’t have enough in Atlanta. The community sees the value of affordable housing. Once upon a time, people would say, ‘We don’t want more affordable housing,’ and now everybody says, ‘We have to have affordability in our neighborhood.’ Keeping that message going is definitely on our mind.” 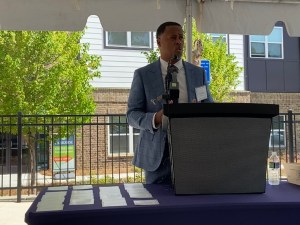 Atlanta BeltLine, Inc. President and CEO Clyde Higgs reinforced this sentiment, adding that affordable housing is critical in creating a city that supports all Atlantans.

“This brick, metal and wood that you see is just a conduit for outcomes we need to produce for these residents,” Higgs said. “This [development] represents the BeltLine’s mission — access to jobs, transportation, affordable housing and access to greenspace. This is going to be a booming neighborhood, but making sure that it’s booming for all of Atlanta is key.”