The death toll has risen to over 2,000 with thousands more injured.

International aid is needed for Haiti after a 7.2 magnitude earthquake caused significant damage and loss of life on Aug. 14. However, after investigations revealed previous humanitarian efforts were mismanaged, many metro Atlanta residents are wondering how they can best help. 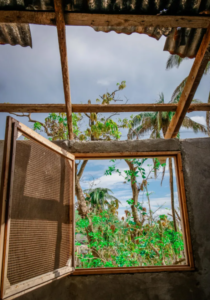 The steel roof of a house is blown away after Hurricane Matthew in Camp-Perin, Haiti.
Credit: Leticia Barr

Freelance PR and Marketing Agent Natasha Pierre Louis’s parents moved to the U.S. from Haiti in the 1970s. She has helped raise tens of thousands of dollars to directly help the beleaguered citizens of Haiti since the 2010 earthquake that caused $7.2 billion in damages and took nearly a quarter-million lives, says the recent disaster feels a bit like deja vu.

She told SaportaReport, “[These organizations] say ‘we’re gonna help,’ and the country’s not getting the money.”

Other humanitarians have had similar feelings. Over the past five years, tech blogger and founder of Tech Savvy Mama, Leticia Barr, has traveled to Haiti eight times to help with rebuilding efforts after Hurricane Matthew.

She said she was curious about Haiti after the 2010 earthquake and had an opportunity to help in 2012 with the rebuilding efforts in the country’s southern region. She said she was disappointed when she found out that major charities, like The American Red Cross, mismanaged donations that were intended to help the victims.

In 2015, an investigation by ProPublica and NPR showed that the organization received over half a billion dollars in donations for the Caribbean country. Still, only six homes were built using those funds. 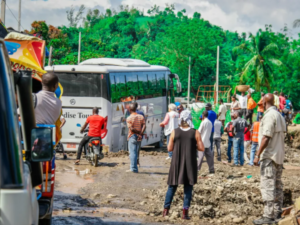 Pierre Louis, who has raised over $17,000 since the previous disaster  added, “everybody can say they have good intentions, and they’re going to give you a receipt so you can write it off on your taxes, but after that, we don’t know [where the money is going.]”

For those who want to make sure their dollars make a difference, Pierre Louis and Barr both say to give to organizations that make a direct impact on the ones who need them and encourage everyone to do their research before making a contribution.

Barr posted on her blog several local organizations that are on the ground helping the people in need. Charities like Project St. Anne, the Haitian Health Foundation (HHF) and the Community Organized Relief Effort (CORE) have been doing the work in providing clinics and proper healthcare, building schools and libraries for continuing education and supporting fair trade programs to provide a fair wage for employment and sustainable income.

Along with her church, St. Peter and Paul Catholic Church in Decatur, Pierre Louis is hosting weekly donation drives every Sunday from 1 p.m. to 4 p.m. In addition to monetary donations, they are accepting clothes, canned goods and other nonperishable items. Other churches in the metro area, including the Atlanta Haitian Church of God in Southwest Atlanta, have relief funds to help the people of Haiti.

She also suggests making donations to individuals of Haitian descent to give the goods directly to their family members and others in their community.

Not really a good idea