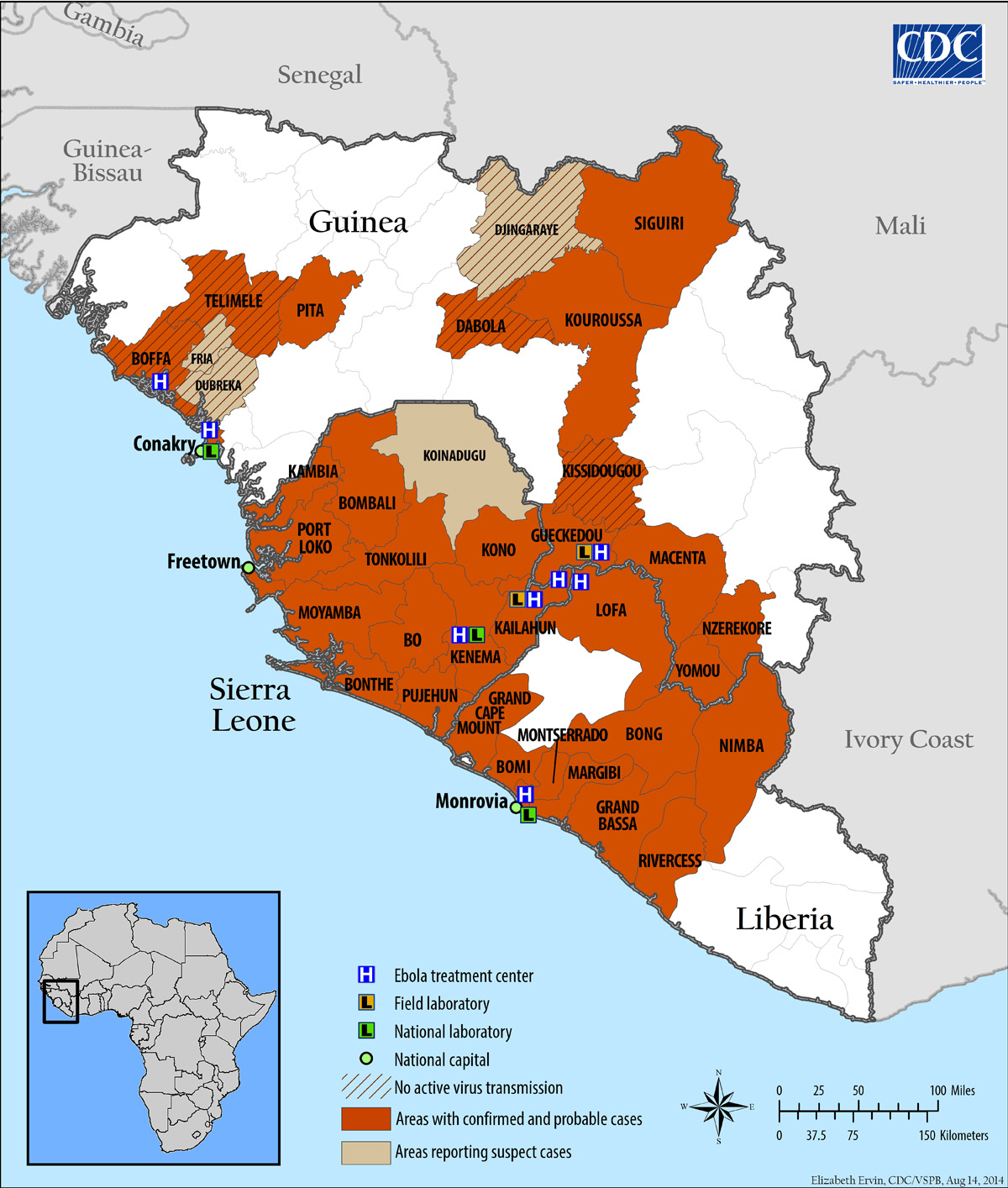 Where the Ebola outbreak is greatest (Source: the CDC)

The Atlanta-based CDC Foundation has received a $9 million donation from the Paul G. Allen Family Foundation to help combat the Ebola outbreak in West Africa.

The funding will support CDC’s efforts to establish emergency operations centers for the countries of Guinea, Liberia and Sierra Leone.

The 2014 Ebola epidemic in West Africa currently has 3,700 suspected cases and 1,850 deaths. The $9 million grant from the Paul G. Allen Foundation will advance the work of the U.S. Centers for Disease Control and Prevention and local Ministries of Health to establish those emergency operations centers in the three most impacted countries.

“Ebola is raging through parts of West Africa like an out-of-control forest fire but it can be controlled if the world comes together,” CDC Director Tom Frieden said. “The donation from the Paul G. Allen Family Foundation helps meet a critical need as emergency operations centers are vital to coordinating the response to stop this epidemic and to prevent other ones in the future.”

The grant from the Paul G. Allen Family Foundation was made to the CDC Foundation’s Global Disaster Response Fund, which is providing essential materials and assistance to advance CDC’s response to the Ebola outbreak.

In response to the Ebola epidemic, CDC activated its Emergency Operations Center in Atlanta and now has more than 100 public health experts in Guinea, Liberia, Nigeria and Sierra Leone.

The funding from the Paul G. Allen Family Foundation will build and equip emergency operations center infrastructure, including buildings where needed, and train emergency operation center staff in each of the three most affected countries.

These centers will help to better establish and fortify systematic actions to prevent, detect and respond to outbreaks through strong incident management systems, staff and protocols ready to act at a moment’s notice; surveillance data collection and analysis to guide prevention and response activities; access to laboratory testing to identify outbreaks early on; and communication systems to disseminate important health messages.

“CDC identified emergency operation centers as a key ingredient in helping to address the Ebola outbreak, particularly in Guinea, Liberia and Sierra Leone where the epidemic has been most intense,” said Charles Stokes, president and CEO of the CDC Foundation. “We are extremely grateful to the Paul G. Allen Family Foundation for this generous donation that provides speed and flexibility to advance the response efforts and provides a comprehensive approach to emergency management.”

To date, the CDC Foundation and its donors have provided funding and in-kind donations to assist in the Ebola response in West Africa.

For instance, the CDC Foundation and its donors have provided 200 computers equipped with software and printers for use in the field by CDC and in-country staff. In addition, they have provided personal protective equipment and thermal scanning thermometers for use by airport screeners. And funding has been provided for health worker training, medical supplies and public health communication in the region.

To strengthen the response going forward, the CDC Foundation will continue to work with donors to provide much-needed supplies and equipment for use on the ground in Guinea, Sierra Leone, Liberia and Nigeria. These items include personal protective equipment, hospital beds, infection control tools, ready-to-eat meals, vehicles, motorcycles, hiring of locally employed staff, exit screening tools and supplies at airports such as thermal scanners to detect fever.

In addition, the CDC Foundation’s board of directors has taken two actions to support CDC’s Ebola response. First, the board acknowledged the tremendous needs presented by the Ebola epidemic and committed $1 million in direct support of CDC’s efforts.

Second, the board agreed to absorb 100 percent of the Foundation’s administrative costs associated with the Global Disaster Response Fund so that every penny is used to support CDC’s emergency mandate in West Africa.