While the first wave of Georgia polling places opened Monday, candidates who want to represent Atlanta, the mountains and all of Georgia in Washington D.C. made their cases in a closely-watched state.

Republican U.S. Senator David Perdue is asking Georgians for a second term representing the whole state, arguing that his challenger Jon Ossoff represents frightening “socialist” change. Democrat Ossoff counters that it is indeed time for some change, but he means changing what he called the “swamp.”

In the Monday debate, each one returned several times to accusations familiar from their TV commercials: that Perdue is the pal of rotten big business, that Ossoff has worked for unfriendly foreigners. That the other is astounding or outrageous.

But there were some morsels for the policy-minded as well.

Ossoff called for a new Voting Rights Act, stronger civil rights laws, national standards for police use of force an an end to racial profiling.

That puts some distance between both men and the lock-em-up politics of previous generations.

But there wasn’t that much more kumbaya.

Perdue called the U.S. Department of Education an unmitigated disaster, saying that before it was put into place in 1974, U.S. students did much better against students from other countries. Asked about coastal sea level rise, Perdue mainly criticized the Green New Deal.

Ossoff said that the U.S. Department of Education runs Pell Grants and needled Perdue on whether he supports disbanding the Environmental Protection Agency.

Perdue’s close alliance with president Donald Trump may put the senator in a bit of a bind with voters turned off by the polarizing president.

Perdue didn’t play on the president’s name during the debate. Instead he offered a vision of the U.S. just before COVID-19: low unemployment, high output.

“I’ve traveled all over the state from Hahira to Hiawassee and listened to people and their troubles, and how they’re trying to deal with a federal government that has been bloated out of size,” Perdue said.

And if Ossoff has an image challenge, it’s that his youth and lack of experience in office may make him seem a greenhorn.

But Ossoff offers his own experience outside of politics and that politicians don’t serve the interests of ordinary people.

“Politicians like Senator Perdue have failed us, and the choice is very clear for voters in this election,” Ossoff said. “I run a business that investigates organized crime political corruption and war crimes all over the world.”

Meanwhile, Libertarian Shane Hazel said his mission is to bring people together while preserving freedom. Libertarians generally support strict limits on the size of government and minimum interference in peoples’ lives. And to that end, many of his comments were about the role of government itself, not bread-and-butter issues per se. He said it’s time to end the drug war, restore sound money (typically money redeemable for gold), and that COVID-19 response should be left to states and people.

He also criticized Georgia voting laws — which give the two top vote-getters a runoff if no one gets a majority of votes.  Or a “do-over,” as he put it.

Northeast Georgia’s Ninth Congressional District is about as red as they come, and gun store owner Andrew Clyde, who emphasizes his evangelical religion, support for President Trump, disdain for the IRS and career in the U.S. Navy, also has hundreds of thousands of dollars of his own money to bankroll his run for what seems a safe seat.

But Democrats hope a blue wave might wash over the mountains, navigated by Democrat and self-proclaimed progressive Devin Pandy, a supporter of universal basic income and a carbon tax.

Both men would be new to elected office, but Clyde is not new to the spotlight. His name is on a congressional act that limits the IRS’ power to seize assets from companies on the suspicion of wrongdoing. Clyde is now campaigning to dismantle the whole agency and income taxes. He’d replace graduated income tax with a flat national sales tax.

This year, Clyde’s business was one of several plaintiffs in a suit against Athens-Clarke County over a local shelter-in-place order enacted to stop the spread of COVID-19. Pandy asked Clyde whether that move was about public safety or about having the Clyde Armory store declared an essential business.

Athens-Clarke County was also trying to keep people in their homes and deny people their first amendment rights under the Constitution, Clyde charged.

The local Athens ordinance didn’t shut down the gun store — it applied to bars, restaurants and large gatherings.

A federal judge dismissed the case as moot, after the state set up its own COVID-19 shelter orders.

Pandy, who spent 21 years in the U.S. Army, sought to make himself relatable, saying he’s barely a “thousand-aire,” much less a millionaire.

He said he supports a universal basic income that would be bankrolled by a carbon tax, and he called out Clyde for denying that humans contribute to climate change.

“Humans may not have started it, but we’re definitely making it exponentially worse,” Pandy said. “It wouldn’t be something that that sets the entire west coast on fire if it wasn’t real.”

Motivational speaker and author Angela Stanton-King is arguing that she’s the Republican that can flip the deep blue Atlanta-area congressional district long held by the late Congressman John Lewis, even as she’s an outspoken supporter of President Donald Trump. 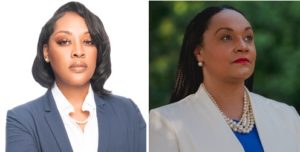 Stanton-King began the Fifth Congressional District debate by calling out Democrat Nikema Williams for declining the debate, saying that Wiliams is “not willing to stand before the people.”

Williams has said she declined the debate invitation because she didn’t want to give Stanton-King “a platform to spread her Trump Republican lies and baseless conspiracy theories.”

Stanton-King attacked the Democratic Party and abortion, saying that adoption and pregnancy prevention ought to be funded. On climate change, Staton-King said that she supports Trump’s initiatives and energy independence, without being more specific. On criminal justice, she tacked toward the center, saying that to reduce crime, poverty has to be reduced.

She’s also open about her own history with the criminal justice system, including a conviction for participating in a car theft ring some 15 years ago — for which she received a 2020 pardon by President Trump.