Not surprisingly, A.D. “Pete” Correll planned his own funeral service.

And Correll made sure no friends and families spoke during the celebration of his life on Wednesday at First Presbyterian Church of Atlanta – other than two pastors who had counseled Correll for many years – Rev. Joanna Adams and Rev. Tony Sundermeier.

“About two weeks ago, we got together to plan the service,” Sundermeier said. “He even wrote something for me to read – guaranteeing that he would have the final word.”

True to form, toward the end of the service, Sundermeier read “Pete’s Final Words.”

A dedicated civic leader, Correll was retired CEO of Georgia Pacific, who died May 25 at the age of 80.

Correll’s closing message to those attending the service was as follows:

“Thank you for coming. If Tony is reading this note, I must be dead. But there are a few things I want to say. Please don’t be sad. I have lived a rich life.”

He then spoke about his Presbyterian faith. 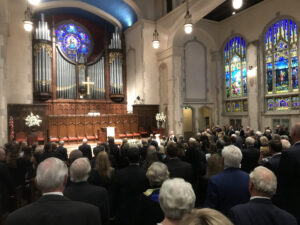 Service for A.D. “Pete” Correll at the First Presbyterian Church of Atlanta (Photo by Maria Saporta)

“I have known God put me on this earth to do something. Grady was it. God must have been preparing me for this my whole life,” Correll said. He added that God had been preparing him for 70 years to save Grady Hospital, which had been on the verge of insolvency until Correll, Tom Bell, Michael Russell led Atlanta’s business and philanthropic community to rally behind the effort to save the public health institution.

A true cross-section of Atlanta’s leaders attended the service, including Dr. Louis Sullivan, former president of the Morehouse School of Medicine and former U.S. Secretary of Health and Human Services, who Correll had tapped to serve on the Grady Hospital board. His wife, Ginger, was by his side.

“He saved Grady, and he saved Atlanta,” Sullivan said after the service. So many other urban hospitals around the country had to close down, but Grady was able to survive and thrive, Sullivan said.

Many of the players in that drama were present at the service: Philanthropist Bernie Marcus (co-founder of the Home Depot); Tom Bell; former Woodruff Foundation President Pete McTier (and his wife, Marci); former Metro Atlanta Chamber president Sam Williams as well as the current MAC President Katie Kirkpatrick.

Grady Hospital CEO John Haupert was there. So were Larry Gellerstedt, chair of Grady Hospital’s board; Liz and Frank Blake, past Grady board chair; and Joselyn Baker, president of the Grady Health Foundation, and the former president, Renay Blumenthal. 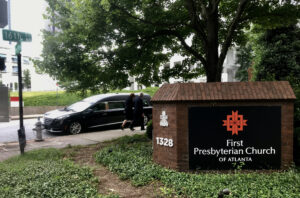 The church included a note saying masks were optional once people were seated – except for those who had not yet been vaccinated. Few masks were worn in the nearly full church. Correll’s service provided a post-pandemic opportunity for people to see each other face-to-face.

Both Rev. Adams and Rev. Sundermeieir spoke of Correll’s desire to contribute and make a difference in the communities he loved – especially Atlanta and his hometown of Brunswick.

Sundermeier shared a quote from poet Ralph Waldo Emerson: “The purpose of life is not to be happy. It is to be useful, to be honorable, to be compassionate, to have it make some difference that you have lived and lived well.”

Correll ended his “Pete’s Final Words” by saying: “I led the perfect life, but it’s time for me to leave the field of play.”

The service ended with the Georgia Brass Quintet playing – When the Saints Go Marching In – just as Correll had planned.