The Atlanta Eagle gay bar, at left, and the adjacent Kodak building are up for City landmark status.

Historic Atlanta, Inc. has secured the money needed to begin a pioneering study of the city’s LGBTQ+ history, an effort that will lead to preservation efforts like landmarking and listings on registers of historic places.

And while that’s a big step for an organization founded to expand the definition of “historic,” it’s just a start. Historic Atlanta is already discussing its next project: an effort to spotlight the underrepresented history of Atlanta’s immigrant, Latinx and Asian communities. 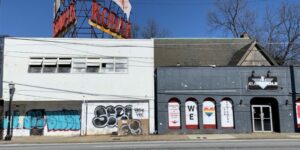 The Atlanta Eagle gay bar, at left, and the adjacent Kodak building are under consideration for City landmark status.

Historic Atlanta aims to issue a request for proposals from consultants for the LGBTQ+ study, formally known as a “Historic Context Statement,” within the next month. The study would take 10 to 12 months to complete.

A Historic Context Statement sketches out the history of a community, place or culture — not necessarily listing every single thing, but naming key people, places and events while suggesting how preservations could identify further significant sites. The document will go on file with the Georgia Historic Preservation Division, the National Parks Service and the City of Atlanta to guide preservationists there and inform such efforts as listings to the National Register of Historic Places.

Historic Context Statements are common in the preservation world, Lawrence said, covering such topics as the U.S. steel industry. An existing local one covers the Civil Rights movement in Atlanta.

Historic Atlanta says the new Historic Context Statement will focus on “LGBTQ+ rights movements since the mid-1900s,” including but not limited to:

Historic Atlanta was founded in 2018 to focus on underrepresented history. It quickly drew attention and some preservation action for its Special Committee on Black Heritage, which produced a list of 25 endangered sites. 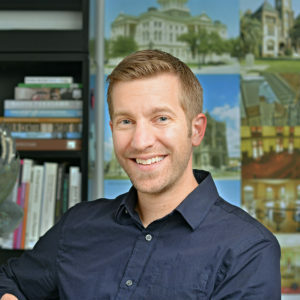 For the LGBTQ+ Historic Context Statement, Historic Atlanta has been raising the $35,000 to $40,000 needed for the study for roughly two years. The Atlanta-based marketing company Mailchimp was a major donor at $10,000, and the National and Georgia Trusts for Historic Preservation provided grants, with individual donors contributing as well. This month, Historic Atlanta received the final funding piece, a federal matching grant of $24,604.52 provided through the Georgia Department of Community Affairs.

For the DCA grant, Historic Atlanta partnered with the City of Atlanta essentially as a funding conduit. The organization and the Atlanta Department of City Planning say the city is not providing any money or staffing to the study. It’s “100% Historic Atlanta’s effort,” says Lawrence.

But the work aligns with the City’s own broadened idea of historic preservation outlined in its “Future Places Project.” And Historic Atlanta’s advocacy recently helped to get the City going on landmarking the Midtown building housing the Atlanta Eagle, a legendary gay bar and target of an infamous 2009 police raid. Historic Atlanta and the City have disagreed on the extent of preservation of that site in a discussion where the organization has said a Historic Context Statement would help.

Mayor Keisha Lance Bottoms praised the effort in a press release, saying, “Atlanta’s leading role in human and civil rights on both the national and international stage is due in large part to the contributions from our LGBTQ community over many years. Thank you to Historic Atlanta, Inc. and the many partners who have assisted this collective effort to preserve LGBTQ sites of significance and enshrine the LGBTQ community’s story in Atlanta history.”

Lawrence says the work is all part of changing the notion of “historic,” where “the focus for such a long time has been on the homes of rich, dead, white people.” With the Black Heritage work under its belt and the LGBTQ+ study gearing up, Lawrence says Historic Atlanta’s small, all-volunteer board hopes to work next on “the third leg of the underrepresented history stool.” That’s “the history of immigrant, Latinx and Asian communities, [which] really is a story that isn’t told at all.”