The Halfway Crooks brewery building in Summerhill was among the 2021 Design Award winners. (Special: Department of City Planning)

Historic preservation and reuse projects took home a majority of the City of Atlanta’s 43rd annual Design Awards in a May 18 virtual ceremony. Meanwhile, city planners teased their intention to diversify their definition of historic sites, as they seek a grant to study LGBTQ history and may landmark more icons of Atlanta’s Black culture and radical politics.

The awards are intended to honor achievements in new construction, historic preservation, public art and landscape design. They include the “Awards of Excellence” bestowed by the Atlanta Urban Design Commission (UDC), which oversees changes to historic buildings, and the “Community Design Awards,” which are voted on by Neighborhood Planning Units for a variety of sites and services.

Among the Awards of Excellence winners were the David T. Howard Middle School for historic preservation, the 725 Ponce mixed-use mega-project on the former “Murder Kroger” site for new construction, and Oakland Cemetery’s new east gate for parks and landscape design.

While technically annual, last year’s awards were canceled due to the COVID-19 pandemic and many of this year’s winning projects dated to 2019 or earlier. 2020’s own historic moments — the pandemic and the “social justice awakening” — emphasized the role the “built environment” plays in society’s responses to such events, said UDC chair Desmond Johnson. 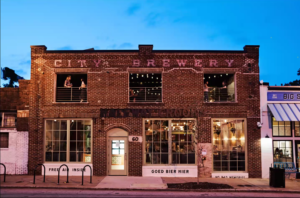 The Halfway Crooks brewery building in Summerhill was among the 2021 Design Award winners. (Special: Department of City Planning)

This year’s awards come as planners were already grappling with equity issues in urban design and as the city is seeing what Tim Keane, commissioner of the city’s Department of City Planning, said is a “literally unprecedented” amount of construction at every scale. The awards in part reflect those concerns, he said.

“We want the city, as a result of all of this development and construction, to be a better place. And that can’t happen without careful consideration and attention to the overall quality of design,” said Keane, adding that includes respect for communities’ residents and history.

And at the planning department, “we’ve got to make a conscious effort to correct and reverse discriminatory practices that have happened in the past” in development regulations, Keane said. “That should be reflected in all that we’re doing and all that we’re celebrating tonight.”

The city last year completed an update of its historic preservation ordinance, dubbed the “Future Places Project.” Doug Young, the city planning official who oversees historic preservation, said that the department is now moving ahead on broadening its view of historical significance. That includes the pursuit of the grant to study LGBTQ history, for which details were not immediately available but Young said would be the subject of an announcement soon.

In recent months, the planning department has advocated landmark status for some buildings beyond the typical mansions and offices of old-time power brokers. The sites include the legendary Midtown gay bar the Atlanta Eagle; the Fuller-Freedom House in the Old Fourth Ward, which served as an organizing refuge for members of the Student Nonviolent Coordinating Committee during the Civil Rights movement; and the Capitol View Masonic Lodge, which doubled as an office for a union founded by Black federal workers to combat racial discrimination. Those efforts, Young said, are just the beginning.

He said that “we anticipate several more designations this year that will continue to redefine what we think and what the community thinks is a landmark building or site [and] really reflects the broad breadth of the city’s history.” 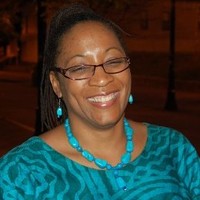 Dr. R. Candy Tate, winner of the Jenny D. Thurston Memorial Award, in a photo from her LinkedIn profile.

In that vein, the UDC gave its individual honor, the Jenny D. Thurston Memorial Award, to a champion of African American history. Dr. R Candy Tate is a historian with the Atlanta chapter of the Association for the Study of African American Life and History, and a board member at Historic Atlanta, a relatively new group focused on promoting equity and social justice with an emphasis on Black and LGBTQ history. Known for her work on the preservation of Fountain Hall at Morris Brown College, Tate is an adjunct professor at Clark Atlanta University and assistant director of the Emory College Center for Creativity & Arts. Keane said the city owes an “incredible debt to her” for her efforts.

A video of the awards presentation is available on the planning department’s Facebook page. (At the ceremony, the UDC mistakenly left one project, The Works, off the list of Adaptive Use winners.) The full list of winners includes:

101 Peachtree Lofts
Conversion of a building at 101 Peachtree St. in Downtown, possibly dating to the 1890s, to lofts with ground-level retail space.

Brown Hayes department store
Renovation of a building dating to 1899 at Edgewood Avenue and Boulevard in the Old Fourth Ward, used by music startup Spinrilla. 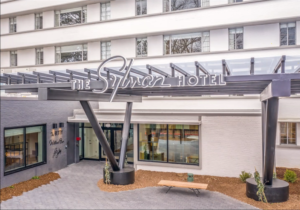 The Kimpton Sylvan Hotel in Buckhead won an award for adaptive use. (Special: Department of City Planning)

Grace Midtown Church
Renovation of warehouse at 579 Travis St. in the Westside into a church with Atlanta BeltLine access.

Indie Studios
Renovation of an industrial building dating to 1950 at 190 Ottley Drive in Buckhead into a shared workspace along a planned segment of the Atlanta BeltLine.

Kimpton Sylvan Hotel
Conversion of a former 1950s-era affordable apartment building at 374 East Paces Ferry Road in Buckhead into a 216-room hotel with a “secret garden.”

United Lofts
Conversion of a former church school at Woodland and United avenues into condos.

The Works
Conversion of 1950s warehouses along Chattahoochee Avenue in the Westside into mixed-use development.

1375 Peachtree
Renovation of the Pershing Point Plaza office and commercial building at 1375 Peachtree Road in Midtown with a large glass lobby and workspace.

YMCA of Metro Atlanta Leadership & Learning Center
Expansion of a traditional Y at 569 Martin Luther King Jr. Drive on the Westside with training, learning and recreation facilities and the YMCA headquarters offices. 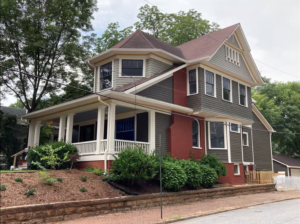 Renovation of the former home of movie executive William Oldknow in Grant Park was among the historic preservation award-winners. (Special: Department of City Planning)

Back 40
A Tudor-style home in Druid Hills dating to 1923 and known as the “Back 40,” with a renovation and addition that preserved the structure.

Oldknow residence
Renovation of a house located on Cherokee Avenue in Grant Park built by pioneering movie executive William Oldknow, who ran the city’s first movie theater and ran such drive-ins as the Starlight. 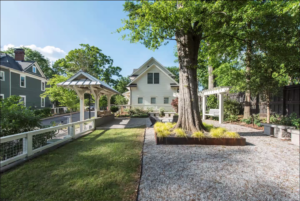 A view inside La France Walk in Edgewood, one of the winners of an award for new construction. (Special: Department of City Planning)

Juniper and Fifth
Condos at the Midtown intersection with a terraced design that UDC says “raises the bar for future development” in the area.

La France Walk
Located on La France Street in Edgewood, this 24-home “pocket neighborhood” was built wiht a variety of house styles and limited room for cars to create a mixed-income community attainable for more residents.

The Works parking garage
A garage serving The Works, which also won as an overall project in the Adaptive Use category.

East gate at Oakland Cemetery
A new gate created in the wall of the historic cemetery at the intersection of Memorial Drive and Boulevard.

Brookwood Hills community park
A renovation of a park run by the Community Club on Wakefield Drive in Brookwood Hills, a Buckhead neighborhood dating to the 1920s that is on the National Register of Historic Places.

The Stacks Squares mural project
A rotating series of murals created at the rear of the Fulton Cotton Mill Lofts at Carroll and Tennelle streets in Cabbagetown.

Update: This story has been updated with the award for The Works, which the UDC mistakenly left off of the list in the ceremony.