Atlanta is poised to join an emerging national movement to restrict dollar stores from crowding into blighted neighborhoods and not selling fresh fruits and vegetables. The first major vote is set for Thursday by the city’s Zoning Review Board. 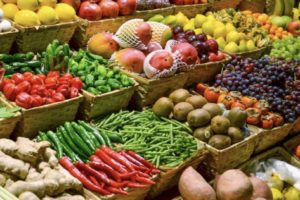 Tulsa, OK has already grappled with the issue in neighborhoods with low-income black residents. Tulsa’s situation gained national attention through a December 2018 report by the Institute for Local Self Reliance. Reports in forbes.com, theguardian.com and biznow.com have described the trend that’s unfolding in urban and rural areas.

The business model calls for a dollar store to open a shop in a blighted neighborhood and sell sundries and groceries, and no fresh fruit or vegetables. Residents patronize the shop in order to avoid a cumbersome trek to a full-service grocery store, even though their food options are limited at the dollar store.

In some case, groceries closet to the dollar stores have closed because they couldn’t compete with the national chains, just as small retailers can’t compete with Walmart and Amazon, according to the ILSR report.

Atlanta City Councilmember Marcia Collier Overstreet has introduced a proposal that aims to help Atlanta get a handle on these types of businesses. The ZRB is slated to consider the measure during its meeting that begins at 6 p.m. at Atlanta City Hall. 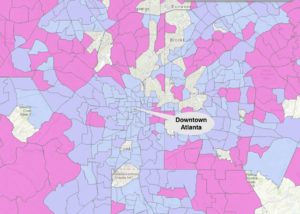 This map of Atlanta’s food desert uses pink to denote Census tracts in which at least a third of residents reside at least a mile from a supermarket. The blue color shows tracts where at least a fifth of residents are in poverty. Credit: ers.usda.gov/David Pendered

The intent of the legislation is explained in a paper that’s worked it way through the city’s network of Neighborhood Planning Units:

The actual definition of a “small discount variety store” in Overstreet’s legislation states:

In the paragraph above, No. 8 relates to a provision on retail shops in multi-family buildings with 50 or more residences.