Planned charging stations for e-scooters, e-bikes could ease tension over their use 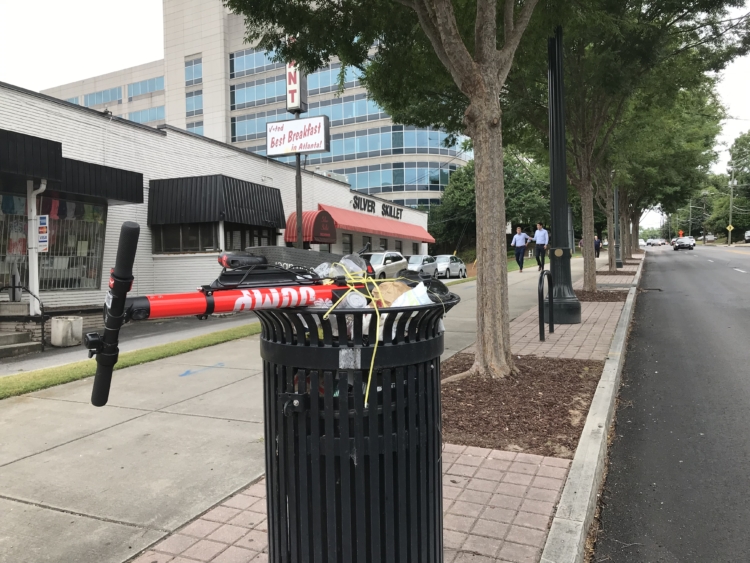 An e-scooter was placed in a trash receptacle outside the Silver Spoon restaurant, on 14th Street in Atlanta. A planned network of charging stations could help reduce tensions over the devices. Credit: David Pendered

The free market has found a way to create a new revenue stream off electronic bikes and scooters, and this answer promises to resolve one thorny issue regarding the devices – where and how the devices are charged. 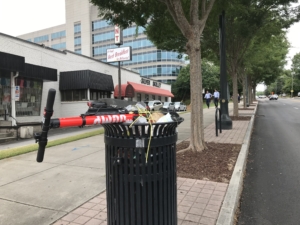 An e-scooter was placed in a trash receptacle outside the Silver Skillet restaurant, on 14th Street in Atlanta. A planned network of charging stations could help reduce tensions over the devices. Credit: David Pendered

GetCharged, Inc., a New York-based company, has signed a deal with property owners to provide 250 charging locations in Atlanta. The first 25 are to be operating before the end of summer, according to a statement.

These 25 stations are part of a package of 250 stations that are described as, “under agreement to potentially install Charge’s docking stations,” according to a map posted on the company’s website. Most potential docking stations are marked in Atlanta, with additional sites near Chamblee, and the business districts at Cumberland and Perimeter.

The idea is for owners of parking lots and structures, and other sites with adequate space, to add charging equipment to some spaces and open the spaces as charging stations.

Price points are not mentioned, suggesting they will be up to the discretion of the property owner.

The take-away from the sales pitch to property owners that’s posted on the company’s website is too good to refuse:

Atlanta City Councilmember Andrea Boone said in the company’s statement that she endorses solutions to help managing the devices that are causing a great degree of consternation as they are ridden in places they are not allowed to operate.

“As the city of Atlanta continues to grow, so has the need for alternative, eco-friendly modes of transportation like e-scooters and e-bikes,” Boone, who serves as vice-chair of the council’s Public Safety Committee, said in the statement.

“But these innovative transportation solutions, while fantastic for so many reasons, have cluttered our city streets and sidewalks,” Boone said. “We would welcome a solution that addresses the safety and aesthetic issues caused by these devices.”

The market for electronic devices is burgeoning as local governments across the country are trying to get a handle on their regulation. Atlanta is grappling with the problem and a recent story in saportareport.com indicates final solutions aren’t likely anytime soon.

Charged is moving into one niche being created by the electronic mobility devices. The two co-founders cite pedigrees that include investments in cannabis and a record of “executing disruptive approaches to a wide range of industries.”

Andrew Fox, GetCharged’s CEO and one of the co-founders, described his perspective of Atlanta’s market:

According to the statement, Charged’s devices are designed to be compatible with most brands of e-scooters and e-bikes. The devices are able to function indoors, outdoors and in mobile docking stations.