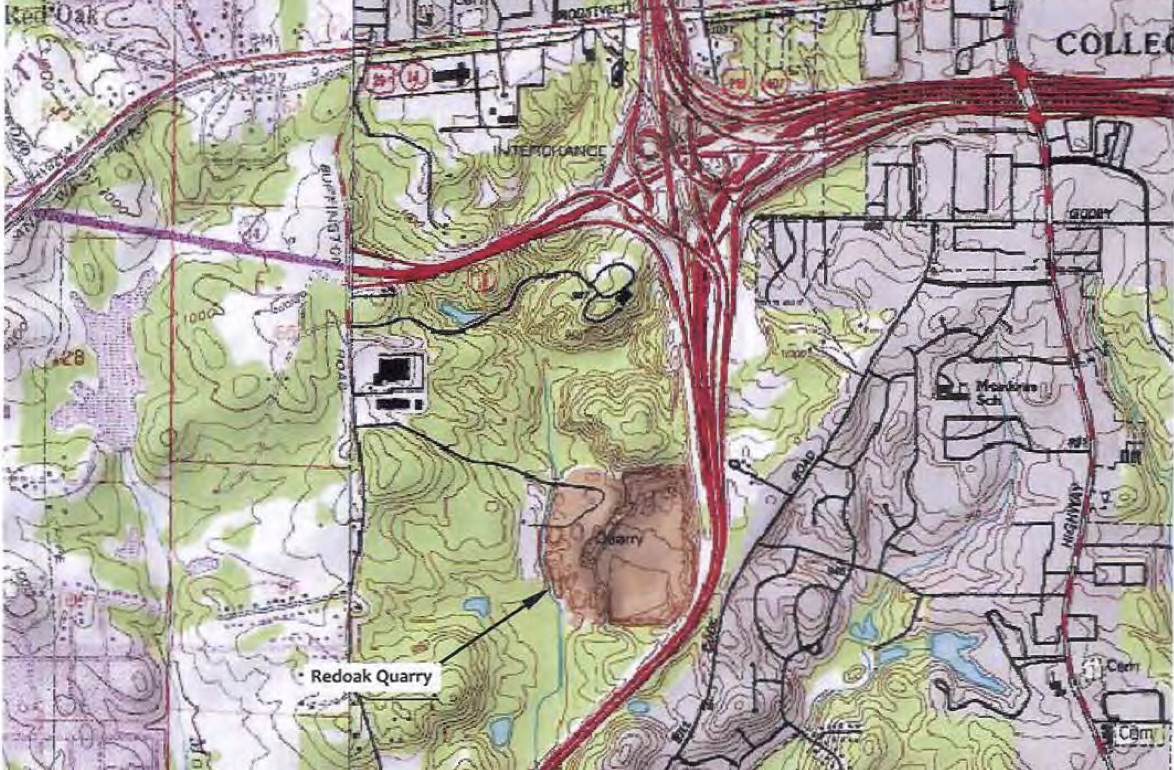 The owner of Red Oak Quarry has filed a request to expand the quarry, which is marked as a beige oval and is located in the southwest quadrant of intersection of I-285 and I-85, represented by the thick red lines. Credit: U.S. Army Corp of Engineers
Share
Tweet
Share
Pin
Pocket
WhatsApp
Buffer6
Email
Reddit
6 Shares

A proposal to expand a rock quarry near Atlanta’s airport has flown under the radar amid the controversy over a plan to mine sand near the Okefenokee Swamp. The local quarry owner excavated wetlands in an unregulated venture in previous work at the site and later bought mitigation credits, and the planned expansion follows settlement of a federal antitrust lawsuit, federal records show. 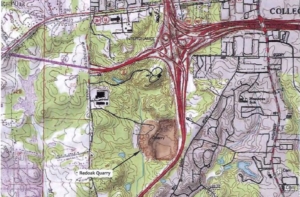 The owner of Red Oak Quarry has filed a request to expand the quarry, which is marked as a beige oval and is located in the southwest quadrant of intersection of I-285 and I-85, represented by the thick red lines. Credit: U.S. Army Corp of Engineers

The quarry owner is seeking to expand this plant, adding 50 years to its lifespan, now that an antitrust lawsuit filed by the U.S. Justice Department and the State of Maryland has resulted in a settlement that required the owner to sell a quarry near Suwanee and another near Hagerstown, Md.

The sale addressed concerns about the potential for monopolistic control over an essential component of road construction. Quarries produce aggregate, which is an ingredient of asphalt and ready mix concrete.

Martin Marietta retained its Red Oak Quarry, located near Union City and about a mile southwest of Atlanta’s Hartsfield-Jackson Atlanta International Airport. This is the site of the proposed expansion.

The Red Oak Quarry has filed permits seeking state and federal permission to move an existing quarry plant and processing facilities to another site on its property.

The move is part of the owner’s plan to expand the existing mine pit to extend its operational lifespan by 50 years, according to a report from the U.S. Army Corps of Engineers office in Savannah. A total of 55.6 acres is involved.

This project would eliminate wetlands and streams – “3.73 acres of four forested wetlands and 1,161 linear feet of two perennial streams,” according to the report. To offset the loss, the company proposes to “protect aquatic resources” by purchasing 22.38 grandfathered wetland credits, and 10,449 grandfathered stream credits from an approved mitigation bank in the watershed.

The plan calls for construction of an aggregate conveyor and road access, in order to expand the existing mine. The overburden from the operation would be stored nearby, according to the Army’s report. 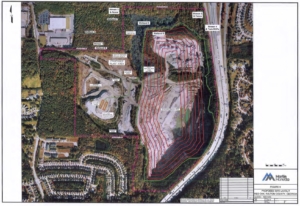 The Sable Chase neigbhorhood is located to the west of the Red Oak Quarry, where the owner proposes an expansion that would add 50 years to the life of the mine, according to the permit request. Credit: U.S. Army Corp of Engineers

The most recent federal permit for the quarry was issued in October 2015, following a request submitted the previous April. This is how the report describes the unregulated expansion that was part of that project:

Regarding Martin Marietta’s purchase of Blue Grass Materials, the Justice department and Maryland contended in an anti-trust action filed in U.S. District Court in Washington that taxpayers in the two states will benefit from continuing competition in the aggregate business only if Martin Marietta divested itself of a quarry near Suwanee and another near Hagerstown, Md., according to the statement.

With out the sale of the two quarries, the new company would have established monopoly control over a critical component of road construction s in north Fulton County and parts of Maryland, according to a terms outlined in the federal lawsuit.

The two firms are among only three competitive sources of aggregate that are qualified by the transportation departments in Georgia and Maryland, according to the lawsuit. The lawsuit cited the likelihood of, “higher prices and poorer customer service for aggregate customers in these areas,” if Martin Marietta were allowed to complete its planned purchase of Blue Grass.