A new report on the construction status of the Vogtle nuclear plant, released Wednesday by Moody’s Investors Service, provides greater detail than a May 10 statement released by Georgia Power and cites a number of risks that could further delay the plant’s opening date. 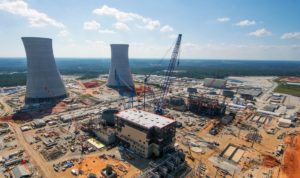 Georgia Power’s statement hit the highlights of the Semi-Annual Construction Monitoring Report, which was released in February. Here are some of the highlights cited in the May 10 statement:

A nuclear facility being built in China with the same design as the Westinghouse reactor at Plant Vogtle was to open in 2014. The first fuel was loaded in February, but stopped for ‘safety concerns’ and was started again in April. Credit: cnnc via world-nuclear-news.org

Moody’s report addresses a list of frequently asked questions about the Vogtle project as it relates to MEAG, the Municipal Electric Authority. MEAG is a partner in the Vogtle project, along with Georgia Power, Oglethorpe Power Corp., and the City of Dalton Combined Utility.

Commercial operations are to begin before the planned dates of November 2021, for Unit 3, and November 2022, for Unit 4, according to the Moody’s report and Georgia Power statement.

Moody’s report evaluates potential problems that could affect the opening date, including the loading of nuclear fuel into the plant. The report cited delays in loading fuel into a similar nuclear plant being built in China. That plant was to begin operations in 2014 but, in February, China halted fuel loading citing “safety concerns”, according to a report by Reuters. The loading did begin on April 25, according to a report by World Nuclear News.

This is how Moody’s analysts described the potential scenario at Plant Vogtle, which includes concerns in addition to fuel loading:

The first-of-its-kind technology could create delays in getting the Westinghouse Electric Co’s AP 1000 reactors at Plant Vogtle certified for use by the Nuclear Regulator Commission, according to a report by Moody’s Investors Service. File/Credit: theconstrutionindex.co.uk