The next definitive update on Plant Vogtle’s cost and opening date is due in February. Until then, ratepayers are sifting through testimony from a monitor whose report conflicts with statements from the company. 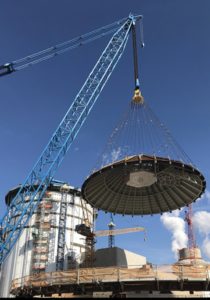 A roof is placed on the shield building at Vogtle Unit 4 in December 2020. Credit: Georgia Power Co.

This morass has existed for years, as construction of the nation’s only nuclear reactors now underway has continued through economic downturns, a pandemic and – now – its third presidential administration. To add to the drama, Westinghouse went bankrupt during Vogtle’s construction and Bechtel was brought in, in 2017, to oversee the remaining work.

The latest statement from Georgia Power, issued Jan. 11, states that the company expects the reactors to open on schedule. The statement does not address construction costs of the two reactors, which have increased above initial expectations and have been approved by the state utility regulator, Georgia Public Service Commission.

The statement does note that construction of the two reactors has been impacted by the pandemic. “Significant adjustments to work practices” have been implemented, according to the statement that says the changes were:

More information is to be provided in a routine earnings call with Southern Co., parent of Georgia Power, on a date in February that’s to be determined, according to the statement.

According to written testimony provided Nov. 24, 2020 by a monitor, Vogtle is months behind schedule, likely won’t open as scheduled, and is over its approved budget by $1.5 billion to $2 billion. Highlights from the conclusion of the monitor’s testimony observe:

In a separate filing, Southern Co. noted a loss of $149 million related to Plant Vogtle in its latest quarterly report filed with the federal Securities and Exchange Commission, on Oct. 29, 2020.

Challenges described in the report include everything from trying to build a reactor with technology so new it’s barely known, to “major equipment failure,” to legal challenges and “inconsistent quality of equipment, materials….” One section in a cautionary section cites risk factors including:

Previous Article
After a Contentious Year of Elections, Look to Local Races in 2021
Next Article
King Holiday Atlanta – January 2021