As Plastic-Free July Challenge 2020 begins for many with a July 4th party amid concerns about the spread of COVID-19, advocates have a simple suggestion – eat, drink and be merry, and be sure to use something other than single-use plastic plates, glasses and flatware. 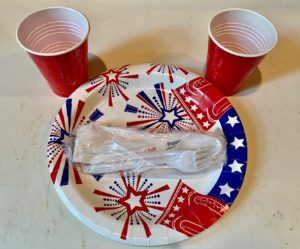 Kicking the plastics at July 4th parties by bringing reusable cups, plates and flatware from home is one way to start the Plastic-Free July Challenge 2020, according to Paulita Bennett-Martin, Oceana’s representative in Georgia. Photo illustration: Kelly Jordan

“This is an unprecedented time, but there are plenty of great ways to reduce single-use plastics while following safety precautions of public health authorities,” said Paulita Bennett-Martin, campaign manager in Georgia for Oceana, a global organization that seeks to protect oceans.

Bennett-Martin said she recognizes that single-use plasticware may seem like the quickest solution to reduce fears of transmitting the virus through containers for food and beverage. The use of disposable dinnerware and utensils is not cited among the federal advisories on coronavirus.

That’s why Bennett-Martin feels safe in offering this simple suggestion:

And with that simple step, folks can join an initiative that has spread to some 170 countries around the world from its origins in 2011 in western Australia.

Plastic-Free July, as with many movements, started small. This one began in Australia, with a decision to change the waste stream that was implemented by the governmental entity that manages waste and recycling in its region, the Western Metropolitan Regional Council. A foundation grew from the council’s effort. Here’s how the Plastic Free Foundation describes its beginning: 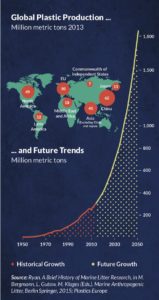 The amount of plastic produced globally is forecast to quadruple from 2014 to 2050, according to projections reported by Oceana. Credit: usa.oceana.org

A few Georgia governments have taken steps to reduce the amount of plastics consumed. In metro Atlanta, for example, Fulton County halted the use of single-use plastics in county-owned buildings and facilities. Atlanta followed suit, with a similar measure that’s to take effect by Dec. 31 – including at Atlanta’s city-owned airport.

The Georgia Senate declined to take up two proposals submitted this year that were intended to reduce single-use plastics.

In the meantime, the Plastics Free Foundation posts a blog with tips for consumers who want to reduce their consumption of single-use plastics. Recommendations include: