A scene from "Portrait of a Lady on Fire"

Set on the rough romantic shores of Brittany in the late 18th century, the movie begins with the arrival of Marianne (Noemie Merlant), a portraitist with a difficult assignment. She is to paint a noblewoman named Heloise (Adele Haenel) to help seal the deal on her upcoming marriage to a Milanese gentleman. (Henry the VIII similarly asked for a portrait of wife # 4 – Anne of Cleves). 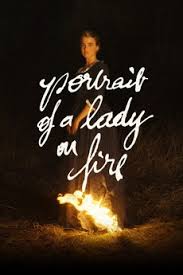 Poster of “Portrait of a Lady on Fire” movie

One problem: as the young woman’s mother (Valeria Golino) explains, Heloise resisted the attempts of the previous painter. No explanation is offered, except we do know she has been convent-raised and that her sister, who was supposed to be the bride, instead jumped off a cliff.

So, Marianne must complete her painting in secret, pretending to be on the premises merely as Heloise’s companion. On their first seaside stroll, she can barely see her subject; because of the windy weather, Heloise is hooded like Meryl Streep in “The French Lieutenant’s Woman.”

Nonetheless, glances are exchanged. As Marianne watches Heloise, trying to commit details to memory, Heloise watches back. Thus, each studies the other.

Then the mother conveniently takes off for five days. Left to their own devices, the women play cards, walk by the sea, read aloud to each other and help the maid with her unwanted pregnancy. Their methods include having her run up and down the beach, hang from the ceiling while drinking some foul concoction and ultimately – in one of the most amazing scenes I’ve ever seen in a movie – take her to the village abortionist (amazing not because of blood or pain or the usual movie complications, but because of a jaw-dropping juxtaposition).

And of course, the two end up joyously in bed together. For a time… 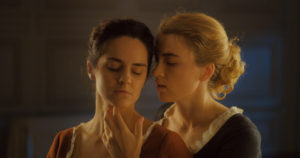 A scene from “Portrait of a Lady on Fire”

Though an unabashedly gorgeous movie, “Portrait” is not an easy film. It is deliberately slow and hypnotic, demanding you adjust to its rhythms and mood. And while it’s a total original, Sciamma does pay homage to other masterful women-on-women films; several of the twinned profile shots could have been lifted directly from Ingmar Bergman’s “Persona.”

Perhaps the most meaningful exchange comes when the three women read the myth of Orpheus and Eurydice aloud to each other. They argue over why, at the last moment, Orpheus looks back, ignoring the King of the Underworld’s instructions and losing his beloved forever.

He makes the poet’s choice, not the lover’s, says one. He chooses the memory of her over the reality.

Or, suggests another, maybe Eurydice was the one who whispered, turn around.

Either way, those conflicting possibilities are essential to the spell “Portrait” casts. Did someone make the artist’s choice instead of the lover’s? Or did someone fail to ask, turn around?