It’s a story of rebirth – the human kind and the physical kind.

A benefit concert for the Westside Singing Ambassadors on Nov. 29 at 960 Martin Luther King Jr. Boulevard provided a symbolic spark of what once was and what could be again. 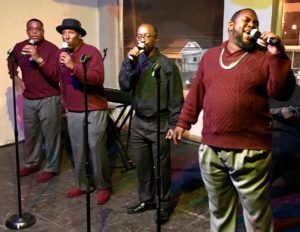 The singing group, led by Idus “Fatz” Parks and Charlie Brown, had previously been called Testimony. Virtually all the singing ambassadors have spent long stretches of their lives behind bars, and yet they have embraced their freedom with a with an amazing spirit and will to change people’s lives.

“We came out of prison MAD,” Parks told the 50 or so people who came to hear them sing. “We want to Make A Difference.”

The benefit was held at a building near the intersection of MLK and Joseph B. Lowery Boulevard SW – once the thriving Hunter-Ashby commercial area that served the retail and cultural needs of a mostly black clientele. The benefit attracted former Spelman President Beverly Tatum, 50-year Vine City resident Hattie Pollard, longtime community leaders Bill Bolling and Neil Shorthouse as well as John Stephenson, executive director of the J. Bulow Campbell Foundation.

Rev. Winston Taylor remembered growing up in the area, and he saw the commercial district decline as residents of Vine City, English Avenue and Ashview Heights moved away.

Three years ago, Taylor acquired the 960 MLK building, which was in foreclosure.

“It had been vacant for 15 years,” Taylor said. “We bought it with the purpose of incubating lots of businesses. When you look up and down MLK, there are lots of empty buildings and empty spaces.”

Within six months, Taylor hopes to have as many as 20 businesses operating out of 960 MLK – with the hope that many will grow and move to new locations along the corridor.

He is partnering with Candy Tate, an expert in historic preservation who is executive director of Culture Centers International, to have Martin Luther King Jr. Boulevard declared at “Main Street” of the National Trust for Historic Preservation as a way to market the entire corridor. 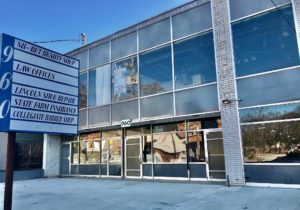 “The idea is to use historic preservation as a catalyst for economic development,” Tate said.

After the benefit concert for the Westside Singing Ambassadors, Tate asked me to imagine the whole corridor being full of galleries, shops, businesses and entertainment venues – in short to bring the street back to its historic significance.

So many historic treasures exist along MLK – starting with the Phyllis B. Whatley YWCA. There’s also the fire-damaged Gaines Hall and the vacant Fountain Hall located on the crest of what was once called Atlanta’s “Diamond Hill.”

A bit further west, there’s the vacant Paschal’s Motor Hotel and Restaurant  as well as the location of the now-closed La Carousel jazz club. And across from the 960 building, there’s the former Ashby Theater – all remnants of an active commercial corridor.

Taylor would like to see the 960 MLK building help spark a renaissance. As a trained architect turned community developer and preacher, Taylor see how all those pieces fit together. He had invested in real estate in the Old Fourth Ward in the 1980’s, but he became dismayed at how gentrification had changed the community.

“If this community is to become a beloved community rather than gentrified like Old Fourth Ward, the only way to do that is as a collective,” Taylor said. “You cannot revitalize neighborhoods in silos or as individuals. It has to be a collective.”

“All these pieces work together for me,” Taylor said. “I see that as part of the larger picture of building healthy sustainable communities. I see this as being a cultural center on the westside with galleries, music and event spaces.” 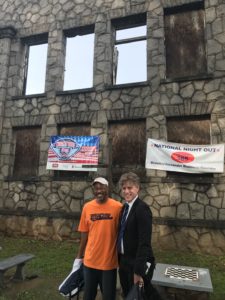 Several businesses already are growing roots in the 960 building. There’s Chef Calvin Rouse and his business partner Brett Smith with their shared kitchen concept – EDC Kitchens. There’s the Art & Soul Café, which is providing a place for local artists to display their work.

And Taylor would love to see the upstairs become an entertainment venue, where groups like the Westside Singing Ambassadors can provide music with a message.

“It’s not the building that’s evolving. It’s the people,” said Taylor, who said his older brother (who is now deceased) was a boxer, who served in prison where he got to know Charlie Brown. After getting released, his brother was able to rebuild his life on the outside – just as the Westside Singing Ambassadors have been trying to do.

Idus “Fatz” Parks reinforced that point at the benefit. The Ambassadors hope to inspire former inmates to stay out of jail. And they also hope to inspire young people to avoid making the same kind of mistakes they had made that led to them spending decades in prison.

“Charlie Brown and those guys can spark hope in people,” Taylor said. “They show that life can be different, that life is transformable. People are meant to be sparks. The real term is hope. They give us hope.”

And that’s how we rebuild community – one building and one person at a time.

Historic Roswell farmhouse on sale for $125K and preservation agreement