A rain-soaked crowd of thousands had been waiting hours when Morehouse College President John Wilson and U.S. President Barack Obama emerged from a side door of a building to enter onto Century Campus for the 129th Commencement of one of the nation’s most prestigious black colleges.

An enthusiastic cheer greeted the two presidents and the official start of the graduation ceremonies as they tried to ignore the return of the dark clouds and the rain. The thousands of people in attendance heard inspirational stories about the Salutatorian  Ernest James Nelson from Albany, Ga. who will be going to the Medical College Georgia at Georgia Regent University; and Emmanuel Denyo Yao Adanu, a dual-degree graduate from Morehouse and Georgia Tech with a 4.0 GPA.

Then Valedictorian Betsegaw Tadele, a computer science major, took the stage. “We shall remember this day,” Tadele said repeatedly in his powerful speech that called for imagining a world free of poverty and where people can live harmoniously. “We will remember this day. We will be among the few graduates 50 years from now who will remember who was their commencement graduation speaker — Barack Hussein Obama.” 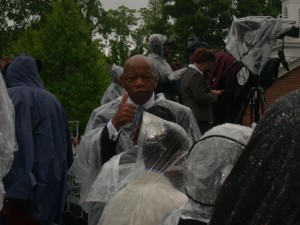 When it was President Obama’s turn to speak, he seemed to relish being with a warm and welcoming audience as someone yelled: “We love you.”

“I love you back. That’s why I’m here. It is one of the great honors of my life to be able to address you today,” said Obama, who several times in his talk to the graduating seniors of Morehouse Men seemed to be talking about himself.

“It’s a little hard, not to follow Dr. Wilson, but the skinny guy with the funny name,” Obama said referring to Tadele but who could have easily been referring to himself three decades ago. “I also hate to say this: Y’all are going to get wet. I would be out there with you if I could, but Secret Service gets nervous.”

Obama made several inside references and jokes about Morehouse and Spelman and the stresses of registration and graduation. And he made special mention of how proud he was to be receiving an honorary degree from Morehouse College so that now he too could become a Morehouse Man. 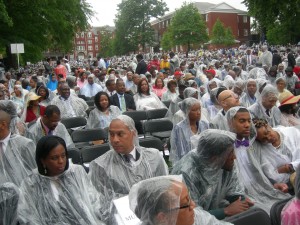 “You can always tell a Morehouse Man, but you can’t tell him much,” Obama joked. “That makes my task a little more difficult.”

He then shared highlights of Morehouse’s distinguished history, from its beginnings in 1867 just two years after the Civil War operating under several names for the next three decades. Then in 1913, it was renamed Morehouse  College gaining national prominence under the leadership of Dr. Benjamin E. Mays, its sixth president — serving from 1940 to 1967 and becoming a mentor to Martin Luther King Jr.

“Dr. King was just 15 years old when he enrolled here at Morehouse,” Obama said. “I think it’s fair to say he wasn’t the coolest kid on campus. His classmates called him ‘Tweed.’” 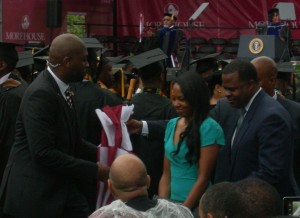 But it was at Morehouse where King was exposed to the teachings of Gandhi and non-violence, lessons that helped him lead the Civil Rights Movement.

Obama said he knew that spirit was still alive because Morehouse seniors were not afraid of some bad weather and wanted to proceed with graduation ceremonies outdoors along Century Campus under the watchful eyes of the Benjamin E. Mays statue.

“Y’all had a choice and decided to do it out here anyway,” Obama said, adding that King learned to be unafraid at Morehouse, and in time, taught a nation to be unafraid — to the point that “someone who looks just like you can come to serve as president of the United States.” 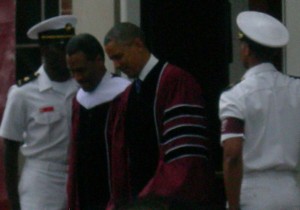 The crowd burst into an enthusiastic cheer.

“The history that we share should give you hope,” Obama said. “You are graduating into an improving job market, and you are uniquely poised. That doesn’t mean we don’t have work to do. Too few of our brothers have the opportunity that you have had here at Morehouse.”

In communities close to Obama’s Chicago home and within a couple of miles of the Morehouse campus, job opportunities are scarce and wages are still too low.

“Policies that generate more opportunities for everybody, reduce poverty, provide security of health care — that’s my job,” Obama said. “It’s important for all of us to advocate for an America where everybody has a fair shot. As Morehouse Men, you are obliged to do so. You have the power of your example. Use that power for something larger than yourself.”

Obama said that no one expects the new graduates to “take a vow of poverty,” but they must not just think about the goods they can buy but about the good they can do.

At times, Obama seemed to go off-script. He said it was important for them to make the most of themselves and to not make excuses like “the world trying to keep a black man down.”

“There’s no longer any room for excuses,” Obama said. “Nobody is going to give you anything you have not earned. Whatever you have gone through pales in comparison to the hardships that other generations have gone through, and if they can endure them, so can you.” 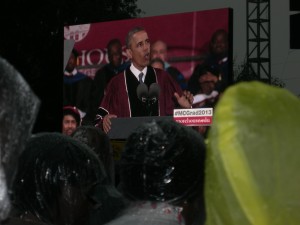 A Morehouse degree will not be enough for them to get by in life; they will have to stay hungry and keep working to be better.

“Be the best husband to your wife or the best boyfriend to your girlfriend or your partner,” said Obama, who then recalled having to grow up without a father. “I wanted to break that cycle where the father in at home. I want to be a better father, a better husband and a better man. It’s hard work. Michelle will tell you I’m not perfect.”

Then Obama said his success in life was not because of his Ivy-league degrees or GPA scores but because he had a connection and empathy for others. 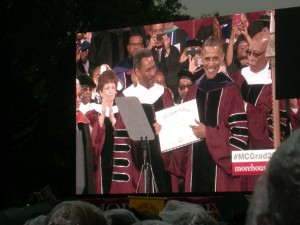 Obama ended his commencement address by calling out Leland Shelton, a political science major. When he was four-years-old, Social Services took him away from his mother to live with his grandparents. Then he was put into foster care at 14. Three years later he enrolled at Morehouse, graduating Sunday Phi Beta Kappa and headed to Harvard Law School. Shelton also is a member of the National Foster Care Youth and Alumni Policy Council, and he wants to use his degree to “make sure kids like him don’t fall through the cracks.”

Perhaps in Shelton and in the other Morehouse Men, Obama saw a mirror image of himself — of a young man who defied many odds and was able to become the most powerful person in the world. Yet the weight of the office and the world’s problems were probably more than Obama could have ever imagined.

As he ended his talk with the hopeful words of working together to perfect our union, a prolonged deep thunder sounded from the skies and the rain intensified.

Morehouse President Wilson, who worked in the Obama administration before becoming the 11th president of the college on Jan. 28, then awarded Obama his honorary degree. The nation’s first black president had now officially become a Morehouse Man.