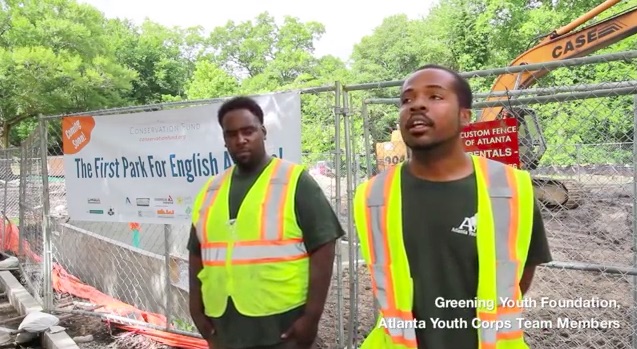 Note to readers: I had intended for this week’s column to be a Part 2 about Metro Atlanta Chamber’s plans to sell its building for the expansion of Centennial Olympic Park. But I ran out of time and didn’t reach out to the various people I thought should weigh in on the topic. So my plan will be to write that column next week.

Proctor Creek. Those two words conjure up so many images for people who know Atlanta.

Long-time residents of the 38 neighborhoods that live in the Proctor Creek watershed – either along the creek or near the tributaries that flow into it – remember fishing and even swimming in what used to be clean flowing waterways.

Of course the severe pollution that later plagued Proctor Creek became a metaphor for many of those once thriving neighborhoods – today victims of disinvestment and deterioration.

For me, Proctor Creek reminds me of my late father – Isaac “Ike” Saporta, who had bought land in the Carver Hills neighborhood. The land was bordered by a tributary and Proctor Creek.

He teamed up neighborhood and environmental leaders – launching a major clean-up of the property. It was disgusting to remember how many tires and how much debris we removed from the property and the creeks. 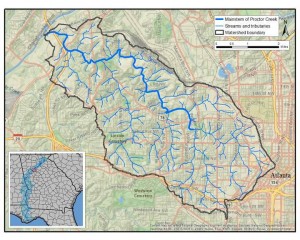 Papa then donated the property to the environmental group – and it was known for a short time as the Saporta Nature Preserve. But then the environment group went defunct, did not pay taxes, the property reverted back to us with taxes owed. We later settled with the city, which acquired the land as part of its green space acquisition program along the city’s waterways as part of its federal Consent Decree.

Na’Taki Osborne Jelks, who was at the Saporta Nature Preserve ribbon cutting in the mid-1990s, remembered coming to Atlanta to attend Spelman College.

The watersheds of Proctor Creek, Sandy Creek and Utoy Creek – all in the western and southwestern section of the City of Atlanta – as being “the forgotten part of the Chattahoochee River.”

So Osborne Jelks joined up with others to start the West Atlanta Watershed Alliance (WAWA), which she chairs. She now also is co-chair of Proctor Creek Stewardship Council.

Proctor Creek was the focus of the Sustainable Atlanta Roundtable on July 12, when panelists were able to provide some insights about where several projects and developments stand.

Here are some conclusions.

There are dozens of entities – governments, nonprofits, for-profits, neighborhoods and a myriad of subgroups as well as forceful personalities all playing in the Proctor Creek watershed.

It is confusing for people who have been watching and following developments for years, if not decades – so you can imagine how complicated it must be for people who are new to the area.

There a grand visions to transform the banks of Proctor Creek into an “Emerald Corridor” with accessible greenways on both sides; to build major new parks – one around the Bellwood Quarry and another one known as Mims Park.

But it’s hard to know who is in charge of what and how these various projects will evolve. 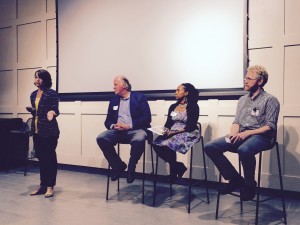 Michael Halicki, executive director with Park Pride, said the area is suffering from a case of “planning fatigue” – there have been so many plans with little implementation.

“There isn’t a comprehensive vision of what needs to happen,” Halicki said. Then there’s an added problem that there reportedly are some new plans are in the works, but they haven’t been shared with the community.

“Up to this point, the efforts of public involvement and engagement have not been as robust as they could be and should be,” she said.

Ideally, the residents would get “to stay in place” helping improve the watershed and not be victims of that success by being priced out of the area. 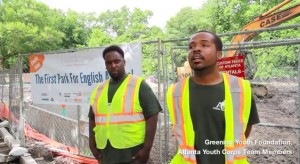 “We have to pay attention to the process – how things are done,” Osborne Jelks said. “Process is just as important as results.”

In a follow-up telephone interview, she said: “The people who are most impacted by decisions should be at the table.”

Eric Fyfe, the Proctor Creek Coordinator who is hosted by Park Pride, said it was important to celebrate the successes that have occurred.

Everyone points to the success of Lindsay Creek Park – the first park developed in English Avenue. (See YouTube video from the Conservation Fund).

Osborne Jelks said that what made that different was that the idea bubbled up from the community. The Conservation Fund and all the various partners have joined up with the neighborhood every step of the way – even partnering with the Greening Youth Foundation to hire residents to fix up the green space.

They will hold a community celebration at the new park on Saturday, July 18 from 12 to 3 p.m.

Ray Christman, senior vice president and Mid-South Division Director Trust for Public Land, said Proctor Creek is the greatest contributor to pollution to the Chattahoochee River in the City of Atlanta.

He is convinced that the Westside of Atlanta will be the epicenter of new development and redevelopment in Atlanta.

“It’s not a question of whether we will grow, but how we will grow.,” Christman said. “I hope it will grow in a way that is tied to the communities… There are a whole host of activities going on – so many that none of us can keep track of them.”

We can help Proctor Creek and Atlanta’s Westside recapture their former vibrancy and glory. But with so many players, everyone must agree to the Hippocratic oath – first do no harm.

Do not destroy the tremendous history that exists in this part of Atlanta. Do not displace the people who live here – but help them improve their quality of life – especially the long-time residents who remember when one could wade in the clear, clean waters of Proctor Creek.

That way younger generations will make their own special memories of a renewed Proctor Creek in Atlanta’s Westside.