In the jaw-dropping “Promising Young Woman,” the phenomenal Carey Mulligan takes us into the very darkest heart of rape culture, touching on everything from your obvious open schoolboy rape (as the song in “The Fantasticks” goes) to deeper consequences brought up by such real-life cases as Harvey Weinstein and, yes, even the proven-innocent Brett Kavanaugh.

However, writer/director Emerald Fennell knows exactly what she’s doing. “Promising Young Woman” has much more in common with “Death Wish” than legal documents. It’s a harsh film, rough and ready and daring as hell.

Oh, and did I mention it’s darkly funny, too? 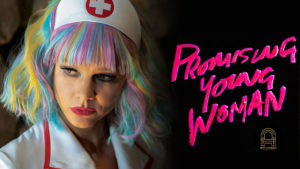 Cassie was once what you’d call “a promising young woman.” A cupcake-yummy blue-eyed blonde, she was enrolled in medical school until a trauma she still can’t shake caused her to drop out.

Now she works as a barista by day.  At night, she hits the bars and apparently gets plastered. And the nearby young men can’t help but notice her, splayed against a bar booth, disheveled, her legs spread wide, her phone gone missing.

What else is a “nice guy” to do except help her get home? Except, inevitably, the nice guy takes her to his place, just to, you know, check on her, make sure she’ll be ok. “What are you doing? “ she slurs, seemingly semi-conscious at best as he starts taking off her clothes. He doesn’t bother to answer until suddenly, in a stone-cold sober voice, she asks again, “What are you doing?”

If this were really the feminist version of “Death Wish,” she might whip out a knife and perform a little unsterile surgery on his privates. But Fennell, who played Camilla in “The Crown,” has created a much more complex, much more disturbing picture. Cassie metes out vengeance, but not in such a straightforward, bang-you’re dead manner. Not, that is, until the last act when the movie takes one risky twist after another. Here’s an ending you won’t see coming.

“Promising Young Woman” dares to explore every sordid nook and cranny of rape, starting with the she’s-asking-for-it mentality (“Girls like that put themselves in danger” notes one would-be “rescuer” before making his move). Another, after trying to force some coke up a seemingly unconscious Cassie’s nose, squeals he’s a nice guy once the tables are turned. And in one chilling scene, Cassie confronts a dean at her former med school with an OMG scenario that cuts through all sorts of equivocation and second-guessing about how much female victims bring this stuff on themselves (in a nice touch, the dean is female). 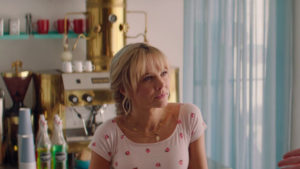 Aside from the very real possibility that Cassie may be doing herself more harm than good with these revenge scenarios (no matter how effective or satisfying they may be), another complication arises when a former med school classmate (Bo Burnham, who wrote and directed the expert “Eighth Grade”) shows up. Good looking and full of self-deprecating humor, he would seem to be just the Prince Charming Cassie needs to break out of her cursed cycle. But is he – and can she?

The movie is smart enough to know all predators aren’t frat boys or fat movie producers or flashy dudes with gold jewelry. They come in every possible shape, size and line of self-justification. One would-be seducer even does a little song-and-dance on how make-up “oppresses” women. I can’t remember if that’s before or after he puts his hand up Cassie’s skirt.

There are some missteps. Cassie doesn’t quite fit with her parents (Clancy Brown and Jennifer Coolidge) and her parents don’t really seem to be the type to watch “The Night of the Hunter” on the local Movie Matinee. But mostly, the movie is sure-footed and full of surprises.

As is Mulligan’s superb performance. She does funny, bitter, seductive, vengeance-minded, broken-hearted – sometimes all in the same scene. What a phenomenal actor she is. Fingers crossed, someone will keep giving her remarkable material like this to work with.