I spent some time in a few downtown dumpsters this weekend.

Don’t be alarmed. I was viewing D­_MPSTERS, a multi-artist, weeklong project by the Goat Farm and curated by Elevate Atlanta.

Much like Central Atlanta Progress’ PARK(ing) Day repurposed on-street parking spaces for place-making, this unique Elevate Atlanta project mirrored that focus but throughout the Fairlie-Poplar district and with an emphasis on art.

Public art is not new to the city, a refrain noted during an Elevate “Social City” lecture by Atlanta historian and Georgia State University professor Dr. Timothy Crimmins. Our first sculpture was a Confederate memorial at Oakland Cemetery. With a population of just 60,000, nearly a quarter of the city’s residents showed up to its dedication.

For more than a century, prominent public art has focused on honoring the city and state’s history makers such as Benjamin Harvey Hill, Henry Grady, Booker T. Washington and John Wesley Dobbs. In recent years, that honor has shifted to renaming downtown streets – erasing one moment in history for another. 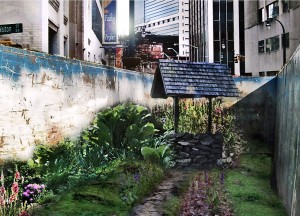 Also of note, these public displays focused on the accomplishments of a single individual or the events in a period, rather than incorporating the public at large.

Fast-forward to the digital age and many of our public installations invite public participation thanks to modern technology. For example, Atlanta-based multimedia artist Danielle Roney worked with the National Black Arts Festival to Skype, just a year into the online platform’s beta release, with artists from South Africa, allowing participants to transcend geographies.

Elevate, FLUX, glo and Art on the BeltLine are all using technology – particularly social media – to amplify the artists’ voice and to create a new-aged mixed media experience such as images projected on a building or wall that complement the movements of dancers or that are mimic the cadence from a musician or band.

The progression of the city’s public art has been more events focused with short-lived installations, including Elevate oftentimes touching on public policy needs.

Well Wishes, the first stop of my D_MPSTERS tour, offers, according to artist Kris Pilcher, a wishing well set in the middle of a secret garden, invites citizens off the sidewalk into a fantasy like environment where they can deposit their wishes in the well, and hear the whispers of other Atlantan’s desires for the city. The project aims to create a discussion about our future, create a refuge for our dreams and bring a bit of our beautiful natural resources closer to the city center.

Pilcher’s piece simply addresses two critical issues – this desire to create the Atlanta of our dreams and the need for more green space intown.

A few years before Elevate came into existence, Roney worked with other artists to create Human Storage, a Castleberry Hill exhibit that projected images of homeless individuals at the Rescue Mission on the U-Haul Moving & Storage building. A poignant juxtaposition indeed.

The public impact of art can be incredibly profound – provided we give these artists the platform – and frankly, the funding – to express these societal concerns.

It’s refreshing to see these conversations take place outside of the government pulpit. Let’s just hope they recognize how vital the arts are to expanding the hearts and minds of our citizens.

Previous Article
Will an app or a wearable make you healthier?
Next Article
King Center to honor Bill Clinton at 2015 Salute to Greatness dinner