The controversial plan to build a public safety training center at the former Atlanta Prison Farm site is heading to City Council for consideration Aug. 16 in a downsized version that is still opposed by a coalition of community and activist groups.

The council’s Finance/Executive Committee on Aug. 11 approved a version of the plan hurriedly chopped down from 150 acres to 85, conditioned on a final lease agreement being available to the full council for review. The deal would lease the City-owned property along Key Road in DeKalb County to the private Atlanta Police Foundation for $10 a year. The rest of the site would be guaranteed as green space, with at least 170 acres preserved for “strictly public purposes.”

Secretly developed by the APF, the Atlanta Fire Rescue Foundation and City administration officials, the training center is pitched as urgently needed to respond to crime and as a goodwill gesture to police officers in a time of discontent over protests. The smaller version is intended as a compromise with another City-approved vision for the Prison Farm: a piece of the South River Forest, a proposed 3,500-acre network of green spaces in southeast Atlanta and southwest DeKalb. 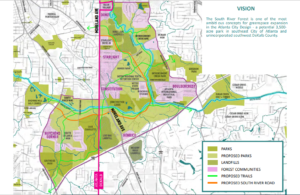 A map of the South River Forest concept as currently drawn by The Nature Conservancy.

The South River Watershed Alliance previously issued its own opposition statement, referring to the South River Forest plan and saying that “the community is sending a single unified message to the council – stand by your promise and commitment.”

The East Atlanta Community Association last month also issued a statement of opposition, saying the Prison Farm site should be preserved for green space, natural habitat and public recreation. It also called for a “qualified and transparent feasibility study” of what kind of public safety training center is needed and where it should go.

Davis also pointed to two alternative sites floated by opponents and even by the APF and other officials. One is a similar training facility planned by Fulton County that Sheriff Patrick Labat is said to have suggested sharing with Atlanta; Labat has not responded to comment requests.

The other is Atlanta Metropolitan State College, which this month began temporarily serving as the new home of the Atlanta Police Academy. According to a report by the advisory council of officials that came up with the training center plan, AMSC was one of three sites that made its short list, but was rejected for lack of space and statements from college leadership that only temporary use would be “reasonable.” (For a copy of that alternatives report, click here.)

The Nature Conservancy recently met with AMSC president Dr. Georj Lewis about the plan. Davis, the TNC Georgia executive director, claimed in his letter, “The president of the College, Dr. Georj Lewis, has expressed serious interest in exploring this alternative.”

Michael Montgomery, AMSC’s director of development and external affairs and head of its foundation, confirmed that Lewis met with TNC. Montgomery partly contradicted the advisory council’s report that the college had discussed and rejected a permanent training facility use on its campus.

Montgomery said that, “…to our knowledge, we have not been considered as a permanent location for the public safety facilities.”

He also provided a written statement from Lewis indicating an openness to discussing the idea.

“We are always open to discussions with our partners on how to provide educational opportunities and programs to our constituents,” said Lewis. “We continue to be excited about our current partnership with APD as the temporary location for the Atlanta Police Training Academy, and look forward to working with them as they build their permanent facilities.”

Update: This story has been updated with comment from Atlanta Metropolitan State College and with a link to the Atlanta Public Safety Training Center Advisory Council report on training facility site recommendations.