The Atlanta City Council has approved a controversial plan to build a public safety training center at the Prison Farm site. Proponents are cheering what they say is a crime-fighting landmark, while opponents are indicating the political battle may have just begun.

The 10-4 vote in a Sept. 8 virtual meeting was preceded by 17 hours of public comment — most of it in opposition, one councilmember said — and with protesters audibly chanting outside Councilmember Natalyn Archibong’s house. Gov. Brian Kemp weighed in at the last minute with a letter of support.

“We are confident this facility will usher Atlanta into a new era of 21st century first responder training and operations,” said Dave Wilkinson, president and CEO of the Atlanta Police Foundation, a private nonprofit that is leading the plan and would hold the right to build the center under a City lease. Councilmember Joyce Sheperd called it a “win-win, and at the end of the day it’s a win for everyone,” citing more public input through a community advisory committee required by the legislation.

Some opponents who criticize the lack of transparency in the choice of the wooded site remain unappeased. Archibong, who was one of the “no” votes, noted the lease allows the City to terminate it for any reason with 180 days’ notice and described its future as a “maybe.” The activist group Defend the Atlanta Forest indicated it will continue street protests, saying on social media, “We will #StopCopCity,” an opposition term for the center.

The South River Forest Coalition, a main local group in opposition, isn’t giving up, either. “Its passing is understandable as a feel-good, quick fix for public safety, which it’s not. Morale and retention of public safety officers could have been assured with allocation of funds, not forest,” said Allen Doyle, a leader of the group. “The next mayor may overturn this hurry-up, secretive process…,” he said, and analyze other possibilities like a partnership with Atlanta Metropolitan State College, current home of the police academy. 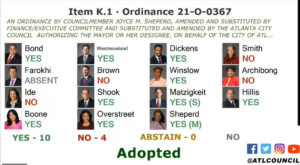 A screenshot of the official tally of how each City Council member voted on the lease agreement that permits the public safety training center to be built at the former Atlanta Prison Farm.

The controversy looks to remain a campaign issue for this fall’s municipal elections, where three councilmembers are running for higher offices and several of the others face challengers.

Brown and Dickens are running for mayor and Archibong is running for council president. Current President Felicia Moore is also running for mayor; in her position, she only votes in the case of a tie and stated no stance during the debate.

The site and the vote

The APF, which has taken the lead on the planning, has pitched the training center as urgently needed to respond to crime and to recruit and retain officers with a high-quality facility. It also would simply be cheaper and easier for Atlanta to have a centralized, City-owned facility instead of today’s rented and scattered ones, it says. The Prison Farm site was the best among those reviewed by a City-appointed advisory council, APF says. Another influential part of its pitch is a claim to have $90 million in private funding lined up — APF won’t name the donors — with the City to provide $30 million.

The Prison Farm site is a City-owned property along Key Road within unincorporated DeKalb County already used as a shooting range and once hosted the police academy. That use is in conflict with another City-approved vision for the Prison Farm: a piece of the South River Forest, a proposed 3,500-acre network of green spaces in southeast Atlanta and southwest DeKalb. To some local advocates, it continues a trend of imposing undesirable facilities like landfills and prisons on southwest DeKalb and southeast Atlanta. Neighbors in unincorporated DeKalb have no political representation in the City of Atlanta, which controls the site and its uses.

The site was selected by APF and City officials behind closed doors and with most documentation still not publicly available. Aside from council committee hearings, the public process consisted of three virtual meetings, two of which did not allow questions or comments. In response to some of the concerns, particularly from the South River Forest Coalition, the council reduced the size of the plan and required a “community stakeholder advisory committee” to oversee the work. However, some of the ramifications continue to emerge; the APF previously told SaportaReport that the smaller size means some facilities would have to go on other sites.

Before approving the lease deal Sept. 8, the council approved another amendment, proposed by Westmoreland, that tightened the advisory committee language further. It requires the committee to be appointed by the City Council and the DeKalb County Commission and for it to review virtually every imaginable type of community impact. 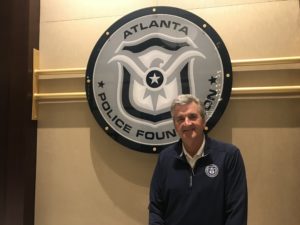 Wilkinson said that is among the work the APF will now undertake. “City Council’s approval of the ground lease for the Public Safety Training Center promises to be the most impactful legislation in support of public safety that our City has passed in a half-century,” he said in a written statement. “Our task now is to complete our engineering surveys, seek the counsel of the Community Advisory Committee, develop the final design, and begin the permitting and construction process.”

Three other motions aimed at delaying the decision or further tightening the community accountability all failed. Ide unsuccessfully moved to delay the execution of the lease until Jan. 4 — when a new mayor and council will take office. Also unsuccessful were Archibong’s motions to table the legislation again and to require APF to provide updates to the advisory committee every 60 days or be in default of the lease.

The roughly 17 hours of pre-recorded public comments from more than 1,160 people was an unusual extreme for the council and forced the meeting to be extended over two days from its Sept. 7 start. Brown said the majority of comments were in opposition, which seemed to be the case with several hours’ worth that SaportaReport listened to, though supporters were a significant percentage.

Gov. Kemp sent a letter to the council backing the rationale of improving morale and recruitment, and alluding to police reform movements.

“Increasing training and support for public safety personnel has united all sides of the political spectrum here in the Peach State in the past,” Kemp wrote in part, “and at a time when residents in our capital city are being plagued by a drastic rise in violent crime, I am encouraging the council to promptly approve this facility.” The Governor’s Office declined further comment when asked about the opponents’ concerns about the site and transparency.

The councilmembers themselves were not nearly so talkative. Sheperd was the sole supporter to comment about the vote. Previously dismissive of public input concerns, Sheperd said she would be introducing legislation to activate the stakeholder committee and “make sure there is real community input.” She noted the former police and fire academies, in infamously decaying buildings, were in her district and the new one will be a boon. (Both academies are currently in new, rented facilities.) 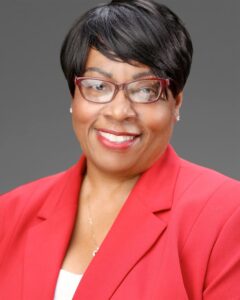 The “no” voters had more to say, with only Smith remaining silent. Brown said the decision was rushed in an election year and ignored the public will. “The whole process has been flawed from the beginning,” he said.

Archibong and Ide both said that APF floated the idea of a new training center to them years ago, but then went behind closed doors.

Ide said APF met with her in spring of 2018 but the next information was the filing of the current legislation. “I couldn’t even tell you what the criteria was for finding a location,” she said. “… “And the end of the day you can’t fix or overlook bad process and there was incredibly bad process here.” She continued to argue the lease’s execution should be delayed until a new City government is in place.

Ide criticized both sides of the “polarized” debate as making false and scare-tactic claims: that supporting the center means supporting bad cops, or that opposing the facility means opposing police and firefighters or letting crime run rampant. “The noise on either side has made this a more difficult process than it needed to be,” she said.

Archibong said Wilkinson met with her in 2017 about the training center idea and the Prison Farm site. She said she urged him to seek public input. “And instead of heeding my recommendation, it was ignored,” she said. “And we now see the manifestation of what happens when the government, albeit well-intended, moves ahead of the public that was trusting them to keep them engaged. … [the] bungling of the comm engage piece has resulted in an outraged population.”

Archibong noted the lack of detail on such issues as maintenance costs and also blasted some supporter arguments. “How irresponsible for the narrative to be [that] building this facility will magically reduce crime,” she said. She also said some supporters presented her skepticism as not supporting the police. “I cry foul. I cry unfair. And it’s another part of a rush to a decision that is not grounded in real, solid community engagement and throwing to the wind accuracy,” she said.

APF deserves credit, Archibong said, for gathering significant private funding and identifying a plausible City-owned site. “But the ‘we, the people’ part of our government matters,” she said.

Update: This story has been updated with comment from the South River Forest Coalition.