Debt-laden Puerto Rico has delivered 16,000 pounds of fresh produce to expatriots and Hispanics who reside in New York City. The donation represents a “Thank you” for help received after Hurricane Maria crippled Puerto Rico. 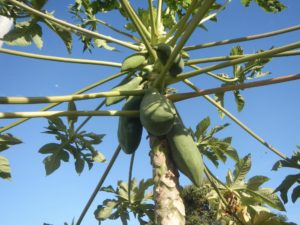 The poor, the elderly, and first responders in the South Bronx were first in line to receive the fresh fruit, plantains and local vegetables, according to a report by fordham.edu. Distribution was coordinated by City Harvest, a non-profit food rescue mission in the Bronx with a relationship with Baldor Specialty Foods.

The donation doesn’t seem to have garnered much attention.

Fordham University’s newsletter reported the story because an alumnus coordinated the effort through his family’s company in Puerto Rico. A trade publication for merchant mariners, professionalmariner.com, reported on the company that handled the tractor-trailer sized container filled with food, a subsidiary of Crowley Maritime Corp., and others involved in the logistics.

The donation seems to have meant a great deal to those who work with the recipients. That’s according to Thomas McQuillian, a vice president with Baldor. McQuillian was quoted in the story in professionalmariner.com:

The shipment grew out of a trade agreement fostered by Fordham University graduate Gualberto Rodriguez-Feliciano. He chairs a holding group of Caribbean food distributors that his grandfather started more than 60 years ago.

The trade agreement calls for New York to buy produce from Puerto Rico. In exchange, Puerto Rico buys apples from New York. The deal was arranged by Rodriguez-Feliciano and New York’s commissioner of agriculture, Richard Ball, according to the report by Fordham. The food donation was coordinated through this network.

Rodriguez-Feliciano said he expects the Latino community in the U.S. to meet the pandemic with the same resilience that Puerto Ricans displayed during the aftermath of Hurricane Maria:

Meanwhile, the pandemic arose just as Puerto Rico was struggling in February to resolve payments on a debt of more than $120 billion, according to a report by reuters.com.

To put that sum into perspective, the biggest bankruptcy ever declared in the United States was for $3.14 billion. That was in 2011, by the Alabama county that’s home to Birmingham, Jefferson County.

New this month is a report issued May 3 by the Government of Puerto Rico that provides its historic perspective on how the U.S. commonwealth came to be so deeply in debt.

Going back to 1938, the report notes that the U.S. Congress passed a law that set the stage for vast amounts of government-issued debt in Puerto Rico.

Two watershed events seem to have set the current stage: