Purina invested $320 million to retool a former textile factory into a modern cat food manufacturing factory that is Purina's first new factory in the U.S. in two decades. Credit: Purina

At a commemorative opening ceremony Monday in Hartwell, Nestlé Purina PetCare is to celebrate a cat food manufacturing plant that promises to help lift a rural part of Georgia where manufacturing is king and locals work hard to attract new industry. 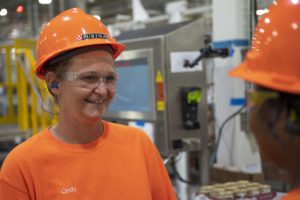 About 240 jobs in all types of roles, from administration to line operations, are to exist by 2023 at a Purina cat food manufacturing factory in Hartwell that was a shuttered textile plant in 2017. Credit: Purina

Purina expects the staff to grow from the current 200 or so employees to about 240 employees by 2023. These jobs represent a huge turn-around from the shuttered textile factory Purina purchased in 2017 to retool into the first U.S. manufacturing facility Purina has opened in the past two decades. The company has a facility in Fairburn that employs about 350 individuals.

Purina chose Hartwell after considering sites in Florida, Tennessee, South Carolina, and elsewhere in Georgia, she said. Purina says it has invested in excess of $320 million in the facility.

“The community has the same values we have at Purina,” Miller said in a conversation before the ceremony.

“When we were doing the site evaluation, we met with civic leaders and stakeholders in the community, and everyone was really welcoming,” Miller said. “We’re trying to create a family oriented culture, so Hartwell fit really well with Purina.”

One example of the emerging relationship is a $20,000 donation Purina made to the Northeast Georgia Council on Domestic Violence. The donation is part of the company’s Purple Leash Project, which enables victims of domestic violence to leave the abusive environment with their companion animal. 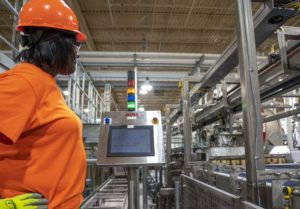 Purina invested $320 million to retool a former textile factory into a modern cat food manufacturing factory that is Purina’s first new factory in the U.S. in two decades. Credit: Purina

The jobs at Purina’s factory are good news for advocates of Hart County’s traditional jobs base. Hart County’s historic manufacturing sector dovetails with that of Anderson, S.C., to create a manufacturing hub along I-85 between the major markets of Atlanta and Charlotte.

Anderson is located across Lake Hartwell from Hartwell and is home to manufacturers including Electrolux, Bosch Corp., Millikin, and Michelin, according to a report by Anderson County’s economic development entity.

In addition, Purina’s arrival and pending expansion arrives as a time civic leaders are trying to retain the manufacturing base as they work to diversify the economy. Tourism seems like a logical sector, given its growing role in Northwest Georgia. However, tourism hasn’t made a much of a dent in the region, or in Hart County in particular, according to the 2019 comprehensive plan produced by the Georgia Mountains Regional Commission, the region’s planning entity.

Purina intends to operate the facility in an environmentally responsible manner, Miller said. Purina released a video that shows some of the operations and activities at the plant.

The plant is zero waste in terms of product going to a landfill, Miller said. Byproducts of the processing of meats, grains, vitamins and minerals that go into cat food are handled through recycling, composting and energy recovery, she said.

Electricity and water are two sectors the company has under active review. Purina will move forward as best practices solutions are identified – with a decision on power a few months out, Miller said.

“We’re aiming to be powered by 100 percent solar in the near future,” Miller said. “We’re hoping to get a clear understanding in the next month or two. We’re in the process now of trying to choose a power source that offers us 100 percent renewable.”

Water is another key component in making cat food. But not as an ingredient.

Cat food is made through a process similar to canning human food – it’s blanched in the can. Ingredients are placed into a can that’s heated, and then quickly cooled by immersion in water.

“The cooling process takes a lot of water to cool the cans, once you’ve heated them up,” Miller said. “We’re looking at that cooling water, and how many cycles and uses, and how we can use that information to drive the overall usage down so that we’re minimizing our impact on water.”