The conviction of disgraced singer R. Kelly on all counts of abuse, including forced labor, underscores a groundbreaking new report on human trafficking in the United States that includes a section on Georgia. 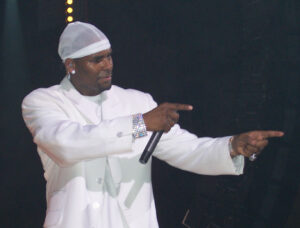 R. Kelly was the subject of abuse allegations when he performed ‘Mr. Show Biz Presents: The Light it Up Tour’ in Atlantic City, N.J. (Photo by Nicholas Ballasy via wikipedia.org)

Kelly’s conviction on Sept. 27 ended almost three decades of allegations against Robert Sylvester Kelly, known as R. Kelly, an R&B performer and music industry entrepreneur who’s won three Grammy Awards and 26 nominations. A federal jury in Brooklyn found Kelly guilty on all nine counts of a superseding indictment, including sexual exploitation of minors, coercion and forced labor, according to a statement from the U.S. District Attorney’s office for New York City.

The conviction has focused attention on the “2020 Federal Human Trafficking Report,” issued Oct. 4 by the Human Trafficking Institute. Since 2017, the institute has provided an annual overview of all federal prosecutions of human trafficking.

This year’s edition contains additional information – a compilation of every federal criminal prosecution of human trafficking, in each state, since Congress in 2000 enacted the landmark Trafficking Victims Protection Act. A portion of the law provides this definition of trafficking: 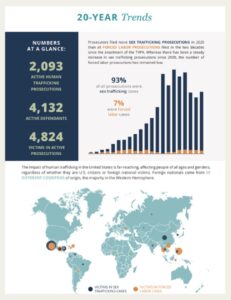 Key take-aways from the Human Trafficking Institute’s report include:

That last data point, on who alleges the crime, is a common phenomenon, as the majority of victims tend to fear reprisal or feel shame and do not notify anyone of their situation.

The courage of victims coming forward was cited by a top investigator in the R. Kelly case. Peter Fitzhugh, special agent-in-charge of Homeland Security Investigations in New York, noted in the statement: 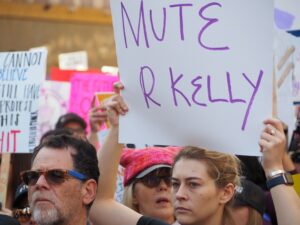 In the 2019 Women’s March in Los Angeles, a woman carried a sign calling for action against the singer R. Kelly. (Photo by Luke Harold via wikimedia.org)

In her introduction to the new report, the Human Trafficking Institute’s director of legal engagement, Lindsey Roberson, pays special tribute to victims of abuse, and highlights their help in producing a report that highlights progress and points to the need for more work to combat predators:

Previous Article
Living tribute to Black female astronaut, a personal journey that led to its creation
Next Article
Stories Matter: We can choose to face our truths together

When ‘stay at home’ orders put children, women in easy reach of their abuser