The glowing green vial Madame Marie Sklodowska Curie keeps next to her bed isn’t the most radiant thing in “Radioactive.” That honor must go to Rosamund Pike whose spikey performance as Curie lights up what could’ve lapsed into another feminist-laced by-the-book biography. 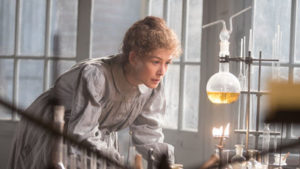 A scene from “Radioactive’ movie about Madame Cuirie

Most of us have heard of Madame Curie, if only because, whenever someone says women aren’t good at science, someone else usually says, but hey, what about Madame Curie?

Madame Curie was very good at science – so good it pretty much killed her (sleeping next to radium can be a health hazard). The same thing happened to her husband, Pierre Curie, who also was infected with radioactive poisoning. Technically, he was trampled in the street by a horse-drawn carriage, but by then he was already coughing up blood.

Directed by Marjane Satrapi, whose “Persepolis” remains one of the most original and affecting films in recent memory, “Radioactive” fleshes out Madame Curie’s story – from the expected resistance to her as a woman in the scientific community to lesser known aspects of her life, such as the scandal caused when, after she was widowed, she embarked on an affair with a married man. 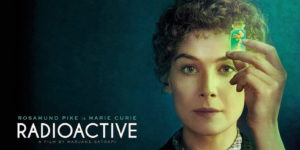 In other words, Curie was no saint; rather, she was a strong-minded woman, an outsider (a Pole in Paris), often arrogant and absolutely obsessed with the wonders of science and her own ability to explore them. When Pierre (Sam Riley) first expresses romantic interest in her, she initially believes he only wants to ride the coattails of her brilliance.

As it turns out, he’s a more honest – a more loving – man than that. And when he is offered the Nobel Prize and she is left out, he’s the one who insists the honor go to both of them (after his death, she won a second Nobel, on her own).

In general, “Radioactive” is a straightforward bio-flick (had to slip in some Variety-ese). But not entirely. In telling us Curie’s life, Satrapi also shows us Great Moments in Radioactivity. One minute, we’re in 1890s Paris; the next we’re aboard the Enola Gay as it heads toward Hiroshima. In the ‘50s, we see how radiation helps a little boy with cancer. In the ‘80s, we see the ghastliness of Chernobyl. 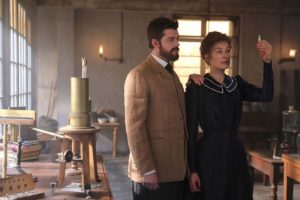 The two lead actors in “Radioactive”

Satrapi’s approach is a good idea, but unfortunately, it remains just that – an idea and, when it doesn’t work, a distracting one. And while the movie tries to make the second half of Curie’s life and her relationship with one of her daughters as emotionally compelling as the first part, we’re still more drawn to the time she shared with Pierre.

That said, the film is worth seeing for Pike alone. One of our least appreciated and under-used actors, she’s been a canny scene-stealer in everything from “Gone Girl” to “Pride & Prejudice.” She’s unafraid of Curie’s unpleasant side, and she finds her eccentricity a worthy challenge, not an obstacle.

Come to think of it, given the many hours to fill in these pandemic-filled days, an at-home Rosamund Pike Film Festival isn’t a bad idea. And “Radioactive” would be a fine place to start.