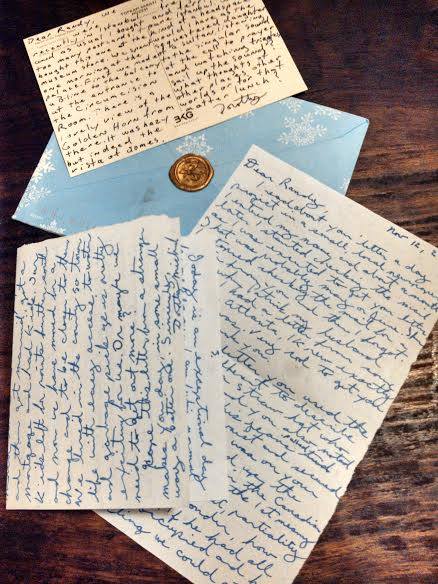 Letter to British Columbia, part of Randy Osborne's Letter a Day Project in 2013 and beyond. 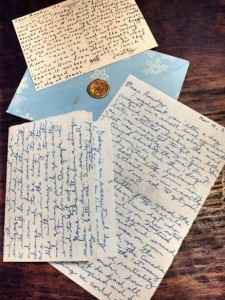 Letter to British Columbia, part of Randy Osborne’s Letter a Day Project in 2013 and beyond.

In the coming weeks, as Americans rush to shove hastily written holiday cards and form letters in mail boxes to friends and family members, Randy Osborne will still pen a letter a day to a stranger.

But the Atlanta writer won’t be sending them for Christmas, Hanukah, Kwanzaa, National Whiners Day (December 26) or any other holiday. Osborne doesn’t care if his letters arrive on or before a day attached to a religious figure or public cause. The last days of 2013 are just like the beginning, when he started writing a daily letter on New Year’s Day.

More than a resolution, his Letter a Day Project is about connection through a nostalgic form of messaging. It is one man’s reply to a national nosedive in personal correspondence.

“I think people really want some kind of contact even if it’s from a stranger, something that takes time and attention,” said Osborne, 58, who teaches fiction and non-fiction writing at Emory University and co-founded Carapace, a monthly storytelling event at Manuel’s Tavern.

They aren’t getting it from family, friends, or strangers.

“Letter writing is a disappearing art,” reported James L. Gattuso, senior research fellow in regulatory policy for the Heritage Foundation, in October. “In 1987, the average U.S. household received 1.6 pieces of personal correspondence per week. By 2012, that had dropped to 0.7 pieces, a 56 percent decrease. “The steepest decline was in letters from friends and relatives. Since 1987, the number of such letters received per household has plummeted 80 percent. The total volume of such mail has declined by 25 percent since 2010 alone. The number of mailed greeting cards is also dropping, with roughly half as many received now than in 1987, and 10 percent less since 2010.”

The “Letter a Day” project is Osborne’s offer (www.randyosborne.com) to write a letter to anyone who requests it. So far he has received over 600 requests for letters from potential recipients in 39 states and 17 countries (including Canada, Denmark, Australia, Finland, Iceland, Oman, Switzerland, Qatar, France, Guinea, the United Kingdom, India, Germany, Sweden, Malaysia, South Africa and New Zealand.) 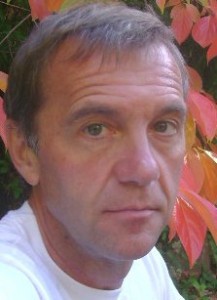 Osborne started this project while winding up a public writing venture called “Narrative Urge,” a scavenger hunt. Osborne placed envelopes around and outside Atlanta, each containing a $10 bill, a handwritten note insisting the money was real and the message was part of a wider art project, and excerpts from published works that served as clues leading to a website. Osborne said the deliberate process of putting pen to paper makes people respond. Letters written by hand are more likely to be the product of extra time and thought, unlike a quickly tapped out e-mails or social media posts, he believes.

“Handwriting forces you to reflect on what you say. You have write slower,” Osborne said. “I don’t think people would say a lot of the things they might say on Facebook if they had to slow down and realize what buffoons they would look like.”

Osborne insists his letter-writing project is not a protest against the Internet. He said he uses Facebook and Twitter for work. “I think there is room for handwriting,” he said. “It’s disappearing so fast.”

In writing to people he doesn’t know, Osborne said he avoids  topics that invite arguments or controversy because that “bores me to tears and I assume it would bore other people.” Instead, “If I have some sort of conflict or difficulty that day, I’ll usually write about it,” he said. “It might be about an argument with a co-worker or something in the neighborhood that shocked me.”

He always tries to find some way to connect with his readers. It may be writing about what he finds interesting about their names or where they live. Most often, his letters cover the mundane, such as the pork tenderloin his girlfriend, Joyce, is cooking in the kitchen .

“Numbness, hunger, trouble, and blame,” were his topics for an Aug. 7 letter to New Zealand, reported on the Narrative Urge Facebook page. “Yogurt-cucumber chutney. The father’s birthday, the death of his replacement. A thunderstorm, Hiroshima.”

“It’s the kind of letter that people like to get,” said Osborne, who doesn’t believe in balling up pages that aren’t pithy enough. He always sticks with the original draft. He keeps going.

“It’s not what’s in it that matters, but the getting of the letter that counts,” Osborne said.

There’s no money involved in “Letter a Day,” but the payoff may be sweeter and more personal. For starters, Osborne said he’s received “a huge bag of mail back.” 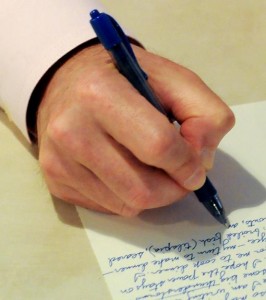 Another day in 2013, another letter penned by Randy Osborne.

Via traditional media, he also has inspired other correspondents. Osborne’s letter-writing project has been featured in stories by the Atlanta Journal-Constitution, The New York Daily News and the Minneapolis Star Tribune, among others. Most of his recipients are women who express surprise and delight that Osborne honors each request. The recipients’ responses on the Narrative Urge Facebook page show the enduring power of analog communication in the digital age.

“Thank you so very much for your heartfelt letter, written on June 4, a very special day for you, as being your mother’s birthday,” wrote one recipient. “Your writing is wonderfully vivid and I was able to see in my mind what you were actually having for dinner that evening. “I am sorry that your mother died alone and lonely. My estranged husband is also an alcoholic. We have been separated for over 20 years. It is a very painful disease that I chose not to live with and to get my sons away from, so they wouldn’t grow up with the disease. So tragic that people won’t, or can’t get help. I hope your writing profession can help you with any pain you feel from growing up with the disease. Thank you so very much for your letter. I hope you are finding joy in your project.”

Osborne recalled another recipient as “an obviously elderly lady who had been quite ill. The letter made her feel much better.” Another woman “wrote back that she was having trouble with her job and her boyfriend and was feeling quite despondent when the letter came in the mailbox. The letter helped.”

Pen to paper, pushing on

When Jan. 1 rolls around, he plans to keep writing. “I’ll keep going with this until they [the requests] stop,” Osborne said. “If people keep writing stories about this I may be doing it for the rest of my life.”

Osborne said one of the best letters he ever sent was one he started out not wanting to write. Most of us rarely overcome that inertia; when is the last time you sent a letter?

“It happened about three weeks into the project. I wrote, ‘I just don’t feel like writing a letter today,’” Osborne said. “The next thing I thought was, ‘What does that have to do with writing a letter?’

By pushing himself to put down his thoughts, Osborne sent a message to himself to persevere.

“Doing it against the resistance of doing it somehow made it deeper,” Osborne said. “I try to apply that to other areas of my life.”

Previous Article
Forget buying stuff you and your loved ones don’t need; give a gift that lasts
Next Article
Atlanta City Council passes plan for Falcons stadium areas; deal releases $200 million from city for construction