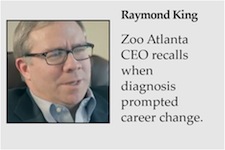 Zoo Atlanta President and CEO Raymond King remembers the Moment the doctor looked him in the eye and said, “You’ve got lymphoma.” Today, he looks back on it as a blessing.

“I often joke with people that if you can be guaranteed of surviving it, then I would recommend cancer to you because of what it does to your outlook on life and how it allows you to see how blessed you are,” Raymond said.

In 2009, Raymond was 45, in perfect health and enjoying a successful career at SunTrust bank as senior vice president of community affairs. He remembers distinctly the Moment when he and his wife heard his doctor utter those words.

“We never cried. We never got mad. We just knew this was something we’d have to tackle and we went into action mode.”

Raymond had a good prognosis and the disease likely wasn’t life threatening. He underwent treatment that included six rounds of chemotherapy and three weeks of radiation. While the treatment process wasn’t favorable, he said being able to sit on his back porch in the spring during his recovery made it bearable.

“You have a lot of down time as you recover from something like that,” King told us in our accompanying Moments HD video. “You get to spend a lot of quality time with those who love you.”

“Friends I didn’t even know I had came out of the woodwork and friends I knew I had sent texts and called me daily and [SunTrust] could not have been more supportive of me.”

The downtime provided opportunities of reflection for King and a new outlook on life. He refers to that period as his “It’s a Wonderful Life” time – a time to live his favorite movie in which he was able to see just how blessed he was.

Because he was “blessed” with this health challenge, Raymond says he was able to look at his life and career through this new lens and evaluate a career change that he otherwise would have overlooked. So when Dennis Kelly resigned his leadership position at Zoo Atlanta in 2010 to accept a similar role at the National Zoo in Washington, D.C., the search committee approached Raymond about succeeding him.

“I’ve never been one for a lot of change – but you realize that life’s fragile.”

Raymond, who was born and raised in Atlanta and attended Georgia Tech, admits that leaving his job at SunTrust – his first professional job out of college – took some coaxing from his wife. With his new lease on life, he agreed to take the leap and leave his 22-year career to lead Zoo Atlanta. 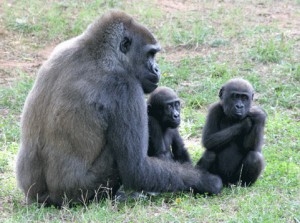 The new position leveraged his banking mindset, philanthropic experience and expanded his opportunity for civic leadership. At SunTrust, King chaired seven nonprofit boards including Fernbank Museum of Natural History, Regional Business Coalition, Metro Atlanta Arts & Culture Coalition and Committee for a Better Atlanta. But his position at Zoo Atlanta would take him to new heights, managing a $16 million budget, being responsible for hundreds of exotic animals from all over the world and leading a staff of dedicated professionals – many of whom had earned PhDs in numerous fields.

“I can’t say I had a master plan that one day I was going to run the Zoo,” he said. “But I got that opportunity and it has been a wonderful success so far.”

In his first two years, he and his team grew annual attendance at the zoo by 30 percent and membership now approaches more than 40,000 households.

But running a zoo isn’t just about increasing memberships – Zoo Atlanta takes on local, national and global research projects and facilitates initiatives to make wildlife more sustainable. For instance, as it cares for the nation’s largest collection of gorillas, Zoo Atlanta also leads research to find appropriate cardiac care for the animal.

Zoo Atlanta takes great prides in its education camps and programs for children – who continue to be the facility’s biggest fans and provide Raymond with one of the most rewarding facets of his job.

“I can have a frustrating budget meeting, but there is nothing better than being able to walk out into that zoo and see a young child with his or her parents or school group and just see their eyes popping,” he said. “And I realize, that’s why I’m here, sitting in that budget meeting.”

Those wide-eyed children are one of the things King saw and appreciated during his time of reflection with this cancer treatment. His daughter, who was 8 years old at the time he was diagnosed with cancer, had nurtured her own dreams of one day becoming a zookeeper. He admits she was hesitant about him taking the role at the zoo at first but now it serves as a bonding opportunity for the two to share their love for animals and the zoo.

“I don’t think I would have even gone on the path of interviewing for the job if I hadn’t had that Moment in 2009,” he said. “Life’s fragile and you better seize every opportunity you get because you may not get that opportunity again.” 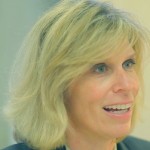 Next week in Moments: Meredith Leapley

Next week in Moments: Meredith Leapley, construction firm owner, on the Moment she had to decide what to do when her father announced he was closing the only business for which she worked.