The economic outlook in metro Atlanta and Georgia appears to be getting brighter, according to several recent credit ratings issued by bond rating agencies.

Atlanta Mayor Kasim Reed said the city’s improved bond rating is the result of strong leadership from the administration and work with the Atlanta City Council.

None of the ratings say the economy is rosy. Just that the walls have held and things aren’t getting beyond control, as is the case in some other parts of the country.

The latest news came in a June 29 bond rating of $396 million in general obligation for Atlanta. Moody’s Investors Services raised its outlook, citing the city’s financial management and role as the hub of a regional trade and transportation hub.

The rating comes a month after Fitch Ratings confirmed its AAA and stable outlook for the state of Georgia. Fitch cited Georgia’s historic growth rates of the economy, low debt and conservative fiscal management.

In May, Moody’s upgraded its outlook to positive from stable on $222 million in bonds used to finance construction of the rental car facility. Moody’s said it based the uptick in part on the forecasted growth in passenger volumes at Hartsfield Jackson Atlanta International Airport.

In April, Moody’s assigned an investment-grade rating and stable outlook to some $492 million in bonds the airport was taking to market. The report cited overall trends for rising passenger volumes.

One dim observation came in March from Fitch Ratings. 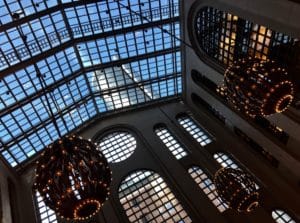 Atlanta’s commercial office space industry is struggling, but the city benefits from the presence of major companies such as Coca Cola, according to a June 29, 2012, report by Moody’s Investors Services. Credit: 191 Peachtree by Kelly Jordan

According to Fitch: “A staggering 37 percent of all Atlanta office properties in Fitch-rated deals are now delinquent.”

But that is far from the doom-and-gloom facing the state of Illinois.

Moody’s in January downgraded its rating for Illinois to the worst in the country, citing the state government’s failure to deal with problems ranging from “severe pension under-funding or to its chronic payment delays.”

When Fitch provided a AA+ rating to Illinois’ unemployment funds earlier this year, it specifically noted that “pledged revenues are deposited in a segregated account, separate and distinct from the funds of the state.”

“The Moody’s rating reflects the commitment of my administration to restore the city of Atlanta’s finances and put us on a solid fiscal foundation moving forward,” Mayor Kasim Reed said in a statement.

“Despite the economic challenges of the past several years, we have built the city’s reserves, worked with the Atlanta City Council to pass sound, balanced budgets; and invested wisely in public safety and young people,” the mayor said.

“The Aa2 general obligation rating reflects the city’s recently improved reserve position, the diversity and scope of the city’s mature economic base which, although impacted by the current recession, remains at the enter of a nationally-important trade and transportation hub, and further incorporates the city’s manageable debt burden with limited future borrowing plans.

“The revision of the outlook to stable from negatives reflects the city’s return to structural balance and resulting, significant improvement of its general fund balance, which is expected to remain satisfactory given management’s conservative budgeting practices and commitment to adhere to reserve targets,” the report stated.

Moody’s said the following steps could raise the city’s rating:

Moody’s said the following could make the rating go down: