Discussions at two meetings Wednesday night should shed more light on developments with the Falcons and Braves stadiums.

Atlanta Mayor Kasim Reed likely will discuss the Braves move to Cobb County with the Northwest Community Alliance. Just before that event, a city committee will be asked to adopt a community benefits plan related to the Falcons stadium.

Meanwhile, at a third meeting, city planning officials will discuss a new city report that confirms that Atlanta’s football and baseball stadiums have not brought prosperity to their neighborhoods. New strategies are needed to help these areas flourish, the report shows.

Reed had agreed in October to address the NCA on Wednesday, long before the Braves’ Nov. 11 announcement that they plan to relocate to the Cumberland Mall area, at a site in the northwest quadrant of the I-75/I-285 interchange. The CBA almost has to be approved by committee tonight if it stands a chance at being approved this year by the Atlanta City Council.

This may be Reed’s first meeting with a neighborhood group at which the Braves stadium deal is likely to arise. Reed has agreed to take questions after his presentation, which is expected to begin about 30 minutes after the NCA meeting starts at 7 p.m. 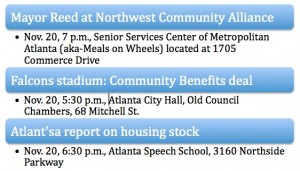 Click on image for larger version: Two meetings on sports arenas and one on neighborhood redevelopment are scheduled the night of Nov. 20. Credit: David Pendered

Nothing has changed about the Braves’ planned relocation since that initial announcement. Reed has not altered his initial position – that Atlanta taxpayers couldn’t afford the cost of refurbishing Turner Field, and that there’s nothing inherently wrong with the Braves moving a dozen miles north of their current home. The Cobb County Board of Commission is slated vote on Nov. 26 on public financing for construction of the new stadium.

The NCA is a good audience for Reed to have this conversation. Its membership is a blend of community and business leaders, and the board is comprised of 60 percent community representatives and 40 percent developer/business representatives, according to its website.

The organization was formed about a decade ago to fight a proposed big box development at the former site of the notorious Castlegate Hotel. The NCA reached an agreement with Selig Enterprises to create the mixed use development that’s anchored by the Walmart Supercenter near the corner of I-75 and Howell Mill Roads.  The NCA was an influential voice during the planning for Atlantic Station and has remained a destination for civic leaders under the guidance of Chairperson Mike Koblentz.

Meanwhile, the community benefits deal is up for proposed adoption. The council has to approve a deal before Atlanta can release any of the $200 million it agreed to provide to help build the new Falcons football stadium.

The current proposal was assembled by Invest Atlanta after more than four months of meetings by a committee comprised of civic leaders and city councilmembers. Reed has attended one meeting.

Reed’s deputy COO, Katrina Taylor-Parks, told the city council’s Finance Committee last week that the Reed administration would like the deal approved by the current city council. The council’s last meeting of the year is Dec. 2. Two new members are to be inaugurated in January, following their wins in the Nov. 5 city election.

The current proposal is the fifth draft. Invest Atlanta created it by adding to the fourth draft the recommendations that were made at the committee’s Nov. 14 meeting.

The third meeting of the night, convened by the city’s planning department, is the second meeting this week to discuss the report, “Creating Linkages and Eliminating Barriers.” The report’s stated purpose is to help inform the discussion over potential policies that could help reinvigorate distressed neighborhoods. City officials said the first meeting, on Monday, was well attended.

Previous Article
Qualified Mortgages Being Introduced In January to Protect Lenders and Consumers
Next Article
Community cut out of community benefits deal at Falcons stadium; Mayor Reed ready to engage